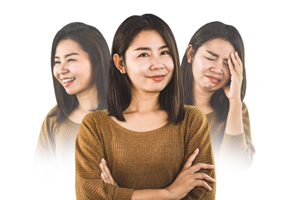 People who have ADHD frequently experience emotions so deeply that they become overwhelmed or “flooded.” They may feel joy, anger, pain, or confusion in a given situation—and the intensity may precede impulsive behaviors they regret later.

The American Psychiatric Association included this emotional dysregulation in the official diagnostic descriptions of ADHD in earlier versions of the Diagnostic and Statistical Manual of Mental Disorders, but later removed it. Several professionals and researchers think it should be included again. Many adults who have ADHD already consider emotional dysregulation to be part of their experience of the disorder.

“The idea that ADHD can be a condition with emotional symptoms is worth highlighting because we often fixate on the cognitive symptoms of ADHD: distractibility, organizational problems, memory issues, and so on,” writes Neil Petersen, a columnist on the experiences of having adult ADHD. “These cognitive symptoms seem to arise partly because people with ADHD have a more general deficit in being able to regulate their own brains. What the high rate of emotional dysregulation among [people with ADHD] suggests is that this inability to self-regulate carries over into self-regulating emotions as well.”

Emotional dysregulation described in the science of ADHD

The researchers presented three models on the relationship between ADHD and emotions. They did not conclude which model was the likely reason for emotional dysregulation, stating that advances in neuroimaging and genomic science will likely help at some point to identify the causes.

Frederick W. Reimherr, MD, has been researching adult ADHD since the 1970s and believes emotional dysregulation should be included in in the criteria for diagnosing ADHD.

“Many cases of ADHD in adults are not being accurately assessed,” he says.

One of the reasons, he states, is how emotional regulation improves for patients who include medication in their treatment plans.

“If around half of people with ADHD, give or take, have especially pronounced issues with emotional regulation, that’s a wake-up call that issues with managing emotions need to be considered as an ADHD symptom,” writes Mr. Petersen, who has ADHD himself. “Both people coping with ADHD and mental health professionals treating ADHD should be aware of this link between ADHD and emotional dysregulation. Among other things, it confirms that psychotherapy is an important part of ADHD treatment, and that therapies addressing how people manage emotions might be especially helpful for [people with ADHD].”

Learn more about ADHD and emotions:

Join the discussion: Do your emotions sometimes feel overwhelming?