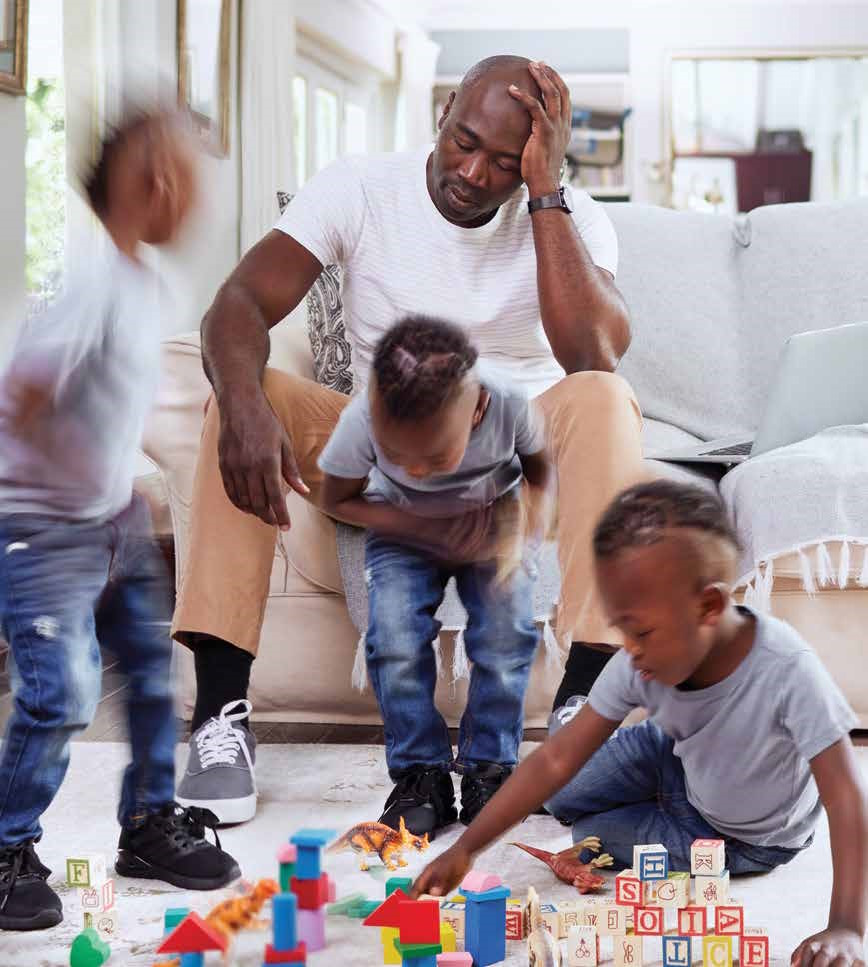 The Black community continues to have difficulty discussing and acknowledging ADHD and other mental health issues. On the flip side, it’s being reported that Black children are being overdiagnosed and underdiagnosed with ADHD, due to implicit racial bias and cultural incompetence among professionals.
So, how do we change the mindset of Black Americans about mental health issues and educate culturally insensitive educators and healthcare providers?

Psychologist Brandi Walker gives insight into the Black community’s reluctance to discuss mental health matters, myths about diagnosis and treatment, the consequences of undiagnosed and untreated ADHD, the importance of comprehensive assessment, and much more. The following excerpts from a 2022 All Things ADHD podcast featuring Dr. Walker were edited for length and clarity.

MELVIN BOGARD:
Why do you think it’s difficult for the Black community to talk about ADHD and mental health issues?

BRANDI WALKER:
One reason is because they don’t believe that it exists. Another reason may be they don’t want to be stigmatized by having a diagnosis. Another reason could be thinking you have it, but not wanting to get tested or not knowing how to get tested for that diagnosis. Generally, the African American community struggles with mental health, talking about it, and owning it because we don’t want something else added to our list of issues. We’re already dealing with financial problems or getting access to resources as it is. Being told that you have ADHD or believing it means, “Oh, my gosh. There’s something else wrong with me.”

BOGARD:
What are some of the common myths you’ve heard?

WALKER:
Within the Black community, a lot of times we make the assumption that because a child’s father is not in the picture, they really don’t have ADHD, they just have discipline problems. There is the idea that children just have learning problems or they have behavioral problems, not knowing that it’s actually a full diagnosis. In that same vein, that children have ADHD when they don’t, when it’s something else at play.

BOGARD:
Let’s say I’m a parent and I think my child or I might have ADHD. What’s next?

WALKER:
Particularly for children and adults, you can go to your doctor and ask to be assessed. When they do an assessment or a test, then they give you a series of questionnaires that you fill out, but then there also may be something like a test that is done on a computer. It’s measuring your ability to maintain attention, your ability to focus, to be able to inhibit distractions. If you do really poorly on that test and you’re also evidencing challenges in your social environment, relationships—because ADHD absolutely shows up in relationships as well. Showing that there’s impaired functioning in multiple areas of general or primary functioning is also an indicator.

Normally, when someone does the assessment, they’ll look at how you function in multiple environments. They’ll also look at how you did on this computer test. They just take the sum of all that information, but what is key is that if you had it as a child, you still have it as an adult.

BOGARD:
How do I know if my child is receiving a proper assessment?

Comprehensive just means they’re looking at behavior, academic, social functioning, and they’re looking at functioning across different environments to confirm the diagnosis or to identify if something else is the issue and it’s not ADHD. It could just be anxiety, depression, or trauma symptoms.

BOGARD:
My child has been diagnosed with ADHD. What are my treatment options?

WALKER:
Medication is recommended. It is not the only evidence-based course of treatment. When we say evidence-based, we mean it’s been tested across different populations, children or adults, and has proven to be effective. We look at medication as a really effective way, but not the only way.

BOGARD:
Is ADHD overdiagnosed or underdiagnosed in the Black community?

WALKER:
It happens both ways. In terms of underdiagnosis, there are children who exhibit the symptoms and meet the criteria for the diagnosis, and particularly among children of color, they don’t get diagnosed until two years later. That means a seven-year-old who has classic ADHD symptoms won’t get diagnosed until age nine. Two years of not having resources, academically falling behind.

A lot of times, when children are in class and they’re not staying up with the rest of the class, they get ridiculed or they get punished. But if you have a disability, you should get resources and accommodations. Without those resources and accommodations, you continue to fall behind. You get your diagnosis two years later and you’re two years behind. Not just academically, but also socially. The children with ADHD are the ones that have the most difficulty with making friends and keeping friends.

When we’re looking at children with ADHD, as they get older, the likelihood of dropping out is higher, 35% higher. The likelihood of engaging in some maladaptive way of coping, like promiscuity, alcohol, video gaming all day, overeating, undereating, all of those things are potential outcomes because a diagnosis has not been caught and treated.

We talk about overdiagnosis when a teacher may think what they’re seeing is ADHD or a prescriber will prescribe medication for ADHD without doing testing or without doing a comprehensive assessment. When that happens, we have African American boys and girls who get the diagnosis when that’s not really the case. One example, while I was in my studies, I was testing a young man, he was six years old, for ADHD. Disruptive in class, not staying on task, getting into it with other kids, and the teacher was like, “I think he has ADHD. They need to medicate this child.”

When I did my comprehensive assessment, I found out that this child’s grandmother had just died, and she was a primary caretaker in his life. His mom had moved in another gentleman into their household and required her son to call him Dad. This child was not getting sleep at night because of all he would see at night. He thought he needed to stay up, protect his younger brother and sister. His sleep deprivation looked just like ADHD, but he didn’t have ADHD. He just had a litany of other problems that could be resolved through therapy. Children need an outlet to say what they’re feeling, be able to process their emotions, and require accountability from their parents when things like that happen.

BOGARD:
What can schools do to help?

WALKER:
When they’re recommending testing and assessment, they can also make sure that it’s comprehensive, that they are dialoguing with parents, and if not parents, caretakers. To really understand fully what’s going on with that child, they can utilize some of the things that they’re taught, like Tier I and Tier II interventions, prior to making the assumption that a child has ADHD. It’s being more diligent in understanding that child, first of all.

Second, understanding children’s learning styles. African American children are kinetic learners, so they like hands-on. They have a lot of energy. They love utilizing a learning concept and being able to make it practical, real-life. If you want to teach math, you may talk about the time does it take for me to get from this particular train stop to the next train stop if I got to stop, go to the store, and buy two loaves of bread. Something like that is absolutely relatable and relevant. It’s a real problem that a child may have to deal with or face. If you can connect their real-life experiences to their learning, the teacher can certainly see a tremendous intelligence there.

BOGARD:
What would you like our audience to take away from this conversation?

This is more so for teachers or providers. Be okay with doing a comprehensive assessment, of looking at the total picture of a person, of really trying to understand their story. The fascinating thing is that when someone thinks you’re genuinely interested, they’ll sit down and tell you what you want to know, including the family as a source of information or as a unit to connect with resources.

When we consider it a diagnosis of ADHD, we neglect to think of it as an impact in the family system, but it tremendously impacts the whole family system. We’re talking about brothers, sisters, Mom, and Dad because of the way the diagnosis shows up. The other thing is that ADHD has tremendous heritability. We’re talking at least one of the parents has a 40% chance of having it, whether they were diagnosed or not. The family unit as a whole should be connected with resources, not just the individual.

Find someone who is familiar with you; it could certainly be someone of the same color. It could be someone who’s not of the same color, but someone who is willing to understand that there are differences amongst people from different backgrounds, and that person demonstrating a willingness to understand your unique experience. The idea of health disparities is very real. We’ve seen it in COVID. We see it all the time. Find someone who acknowledges that they are there, you can see them, can be more diligent about services that are more individualized to the person, particularly a person of color.

This podcast is supported by Cooperative Agreement Number NU38DD000002-01-00 from the Centers for Disease Control and Prevention (CDC). The contents are solely the responsibility of the authors and do not necessarily represent the official views of the CDC.

Listen to the full recording at https://podcasts.chadd.org/e/living-black-with-undiagnosed-and-untreated-adhd/.

Major Brandi Walker, PhD, is an active-duty officer in the Army’s Medical Services Corps, serving as a clinical psychologist at Fort Bragg, North Carolina. She is a graduate of the clinical psychology program at Howard University, where she specialized in children, adolescents, and families. She obtained a master’s degree in rehabilitative counseling from the University of Maryland, College Park, and is a licensed alcohol and drug counselor and certified rehabilitation counselor. An advocate for research, Dr. Walker currently leads a nationwide community health study on ADHD and sleep in the pediatric population.

Melvin Bogard, MA, CHADD’s former director of multimedia content, has hosted a series of All Things ADHD podcasts on ADHD in the Black community. He is passionate about supporting and empowering marginalized communities, fighting for social justice, and reducing ADHD stigma by meeting the resource needs of these communities.