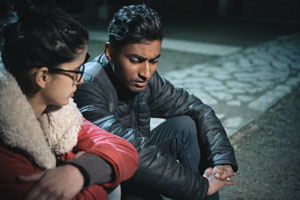 ADHD carries multiple health risks, especially when untreated or poorly managed. Often, people with ADHD have co-occurring depression, which can become life-threatening. In some situations, this includes the risk of suicide.

“To see these numbers is devastating,” says lead researcher Esme Fuller-Thomson, PhD, a professor at the University of Toronto’s Factor-Inwentash Faculty of Social Work in Ontario, Canada.

The researchers say they believe ADHD alone was likely not the cause for the increased risk of suicide, but that co-occurring depression and anxiety played significant roles.

“It’s the rule rather than the exception that people with ADHD have at least one other co-occurring condition,” says Roberto Olivardia, PhD, a member of CHADD’s professional advisory board. “That already increases the risk of suicide.”

The study supports earlier findings by researcher Russell A. Barkley, PhD, that poorly managed ADHD can contribute to the severity of chronic health conditions and may lead to a shorter life.

“Healthcare professionals need to look behind the curtain for ADHD,” says Dr. Barkley. “We need to educate our colleagues about the symptoms of ADHD, the substantial impact this disorder can have, and how to screen for it.”

ADHD and the risk for suicide

“The majority of people with ADHD do not take their own lives, but it is still an important conversation to have,” says Dr. Olivardia.

He stresses that people who consider ending their own lives are coping with depression, and often think their families and friends might be better off without their presence. When someone shares thoughts of suicide with you, he says it’s important to listen and not overreact or minimize what’s been shared.

“We want to first praise them for being open,” Dr. Olivardia says. “Because if someone is telling you that, it means they trust you.”

Encourage the person to reach out for help, either to their own medical professional or the National Suicide Prevention Lifeline at 800-273-8255. If a person shares a plan or an immediate intention to harm themselves, it may be necessary to remain with them until a medical or mental health professional can provide assistance.

There is discussion among professionals and members of the ADHD community that often deaths through suicide by those with ADHD are linked to impulsivity and emotional dysregulation—feelings are so overwhelming in the moment that the person has difficulty stepping back from them to evaluate the situation in a healthy way.

“Most suicide attempts that people have in the moment might be impulsive, but in the grander picture it’s something that the person has thought about, perhaps for a long time,” says Dr. Olivardia.

In combination with depression, often a person who considers suicide is experiencing feelings of disconnection from those around them. This is explained in the interpersonal theory of suicide:

“When you feel like you have no place in the world, that’s a terrifying feeling,” Dr. Olivardia explains. “The disconnect [someone feels] almost doesn’t allow them to think about how [their death] affects others.”

How to help when someone feels suicidal 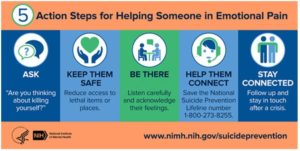 As Dr. Olivardia notes, if someone confides feeling depressed, hopeless, or suicidal, these feelings should be taken seriously. No one, he says, considers or attempts suicide for attention. And when someone who needs attention expresses these feelings, they are asking for help they don’t feel they can ask for in any other way.

Often, though, a person who is experiencing feelings of being a burden or not belonging won’t be the first to reach out. As a friend or family member, it’s important to pay attention to how someone behaves or what they are saying. Ask the person how they are doing, what they are feeling. Offer reassurance that you care and value the person and say that you are willing to help them connect to a professional.

If someone confides in you or indicates they think others would be better off if they were gone, encourage them to contact their medical or mental health professional or the National Suicide Prevention Lifeline at 800-273-8255. If they are a young person still living at home, such as a teenager or young adult, and the person’s family members are not part of the problem, let a parent or another family member know how the person is feeling.

When listening, validate what the person shares with you and be open. Avoid “solving the problem” in that moment; instead reassure the person of their value to you and the community. Offer to help them find a professional or offer to go with them to the professional’s office to help them get started on addressing their feelings.

If the person has a plan or the means to cause self-harm and has said these actions could be taking place in the near future, contact emergency help. Encourage the person to call 911 or contact 911 yourself and explain the situation in as much detail as possible.

“As awful and frightening as it is to have someone close to you who appears to be suicidal, it is also true that there are many things that can be done to help them,” says Rudy Nydegger, PhD, ABPP, a clinical and consulting psychologist. “Being thoughtful and supportive, giving good advice, and suggesting options are things that can help. Getting people who are at risk in touch with professionals who are equipped and trained to deal with these types of situations is absolutely essential, and this is probably the best thing that anyone can do to help a person struggling with suicidal thoughts and impulses.”

Join the discussion: In what ways can we better support people coping with both ADHD and depression?