By Carey A. Heller

“STOP SHAKING YOUR LEGS. You are making the kitchen table move,” said John’s mother. “John, stop tapping your fingers on the desk, you are disturbing the other students,” said John’s teacher. These and similar comments are probably familiar to many of you as individuals who fidget, as parents of children or teens who fidget, or as someone who interacts in some way with people who struggle to sit still. 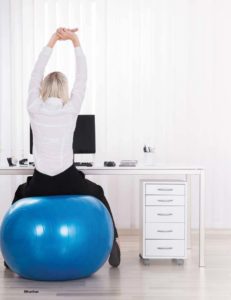 For a long time, fidgeting has been viewed as a negative symptom that needs to be stopped. Only more recently have professionals and parents begun to realize that instead of just being stopped, fidgeting can actually be used in a helpful way to improve focus.

I like to call this idea harnessing fidgeting to improve focus. The principle behind this concept is that individuals fidget when they are bored, unfocused, and understimulated. A good example to illustrate this is a child sitting in school listening to a teacher lecture versus sitting while playing a video game. For a child with hyperactive symptoms associated with ADHD, they are likely to fidget during the class lesson, but be able to sit relatively still while playing video games if actively engaged. Another example is a child who cannot sit still while reading in a chair, but sits perfectly still when sitting in the same chair and playing a game on his or her phone. While this principle may not hold true for all people, it illustrates that being interested, engaged, and stimulated usually reduces hyperactivity. Therefore, in situations that do not naturally interest, engage, and stimulate people sufficiently, fidgeting is likely to occur when ADHD combined presentation is present.

Harnessing fidgeting (not stopping it) turns uncontrolled tapping, leg shaking, etc. into controlled movements. In turn, this can lead to increased focus.

● Interventions should ideally not take away visual or auditory focus. Thus, for a fidget cube as an example, one should be able to use it while looking straight ahead and being engaged in whatever task one is completing or listen attentively to what is going on in class or a meeting.

● Tools should not be too stimulating. While a fidget spinner can be fun, the movement and excitement of it often leads to increased distractions.

● Strategies should be discreet when using them in public. Using your own body parts (such as feet or hands) and moving them in a controlled way is a great tool to use for older children, teens, and adults because it does not require any items and may not be really visible to others. Once you identify how someone fidgets, you can determine specific tools or techniques that can be used. While this list is not exhaustive, there are several strategies that can be used to harness fidgeting to improve focus.

● Tapping each finger on desk individually once

● Attach small stress ball to a stretchy string and tape under the desk; allows minimal movement to harness fidgeting without the ability to accidentally throw the ball

● Small desk bike or elliptical to use while completing work

● Foot pedals (created to be used to increase circulation, but work well for harnessing fidgeting)

● Mindfulness activity before having to focus

As might be evident from the whole-body fidgeting tools, harnessing fidgeting is not always as simple as using one tool at a time to address foot or hand movements. In cases where people fidget at the same time with both feet and hands or the whole body, using multiple tools simultaneously may be helpful.

The idea of harnessing fidgeting to improve focus may be somewhat new and some people may view it as unconventional. Nonetheless, as a clinical psychologist, I have seen firsthand countless times the real impact that harnessing fidgeting can have on people of all ages in improving focus. I have found it to be such a useful tool that I even have feet and hand fidget corners in my office where people can try out different items and use them during appointments.

Many of the tools suggested in this article may seem rather simple. In fact, it is often the simplest tools that are the most effective. Use this information and the suggested tools as a starting point in developing your own set of interventions to harness fidgeting to improve focus.

Carey A. Heller, PsyD, is a licensed psychologist based in Maryland and an assistant clinical professor of clinical psychology at The George Washington University. His assessment specialties include evaluations for learning disabilities, ADHD, and mood/behavioral disorders in children and adolescents. Learn more at www.hellerpsychologygroup.com. Dr. Heller serves as a board member for the Montgomery County chapter of CHADD and as a member of the editorial advisory board of Attention.

Overcoming the Immunity to Intelligence

Everything I Know I Learned in Kindergarten