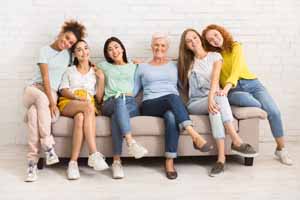 How the Gender Gap Leaves Girls and Women Undertreated for ADHD

Girls with ADHD often go undiagnosed until adulthood, while boys with ADHD are often prescribed stimulant medications earlier than girls, researchers have found.

Symptom differences between girls and boys

Girls are also less likely to be diagnosed earlier because they often display more symptoms of anxiety. Medical providers may only treat a female patient’s anxiety or depression without evaluating for ADHD. Hormones, which affect the symptoms of both ADHD and anxiety, can complicate things. The natural fluctuations related to both a girl’s age and menstrual cycle can seem to worsen some symptoms, while at other times symptoms seem to decrease. These changing symptoms can play a role in a delayed diagnosis.

Without more noticeable symptoms, a diagnosis of ADHD could get missed until a girl is in her teens. By then, she may have struggled with ADHD under the radar for years.

Catching up in treating women

“We’re kind of catching up now,” says Patricia Quinn, MD, pointing out that in the past men received an ADHD diagnosis ten times more often than women. Dr. Quinn is a researcher and author on the effects of ADHD symptoms in the lives of women and girls.

A study released through the CDC’s Morbidity and Mortality Weekly Report confirmed this trend.

“The number of privately insured US women ages 15-44 years who filled a prescription for a medicine to treat attention-deficit/hyperactivity disorder (ADHD) increased 344 percent between 2003 and 2015,” the researchers reported.

The increase in the number of women filling prescriptions for ADHD medication shows that more women are finally receiving an ADHD diagnosis. Yet, some professionals call for increased education and advocacy work to help women avoid the high emotional and social costs of a delayed diagnosis. Researchers suggest that better “understanding the expression of ADHD in females is the first step towards improving detection, assessment, and treatment, and ultimately enhancing long-term outcomes for girls and women with ADHD.”

Arthur Robin, PhD, says there is a mental health cost for women with ADHD who have struggled for years before a diagnosis. He is a professor of psychiatry and behavioral neurosciences and pediatrics at Wayne State University in Detroit.

“The adult women with ADHD I encounter in my practice feel like something is wrong with them,” says Dr. Robin. “They feel like second-class citizens with poor self-esteem, and they often try to hide their difficulties and true natures from others.”

Read more about women and ADHD:

Join the discussion: How do you think gender difference play a role in diagnosis and treatment for women and girls?