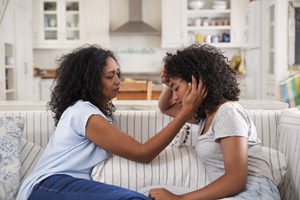 When your son or daughter struggles with verbal, emotional, or physical impulsivity, the teenage years can be especially challenging. Impulsive behavior can lead to traffic violations, bodily harm, or social fallout when your teen seems unable think before they do or say something. You might become frustrated if your child acts without thinking—even when they know better.

Teens with ADHD tend to live in the present moment. They can have trouble reflecting on past experiences and connecting the cause and effect of their actions. They can get so tied up in the “now” that they speak harshly to a friend, not thinking about how their words might affect their friendship.

It is natural to become concerned if your child has trouble keeping friends or has frequent emotional meltdowns. Parents are rightly worried when teens have multiple automobile accidents or speeding tickets. These problems may result from impulsivity or poor response inhibition caused by ADHD.

“Poor response inhibition is one of the most difficult of the ADHD difficulties to address,” says Monte W. Davenport, PhD, director of Life Solutions of Dallas-Fort Worth, a counseling and coaching center.

A teen with ADHD may be unable to stop and think through a situation or pause before they act. To help build this skill, Dr. Davenport uses a “Stop-Think-Go” model. In this model, parents or educators help a teen to practice stopping before acting on impulse, help them think about possible actions, and encourage them to go with their best choice.

Dr. Davenport says teens should ask themselves the following questions before acting:

This step-by-step framework encourages teens, with some adult support, to create a pause before they act. Helping your teen master thinking before acting will take time, patience, and lots of practice. When working with parents and educators, Dr. Davenport often reminds them that it takes time and effort to build self-awareness, develop strategies, rehearse alternative responses, cue appropriate reactions, rehearse, cue, rehearse, cue, and rehearse some more to develop improved impulse control.

Teenagers often have fragile or unsteady self-esteem and problems with impulsivity can lower their self-esteem. Dr. Davenport urges parents to talk with their child or teen, and to share that everyone has impulses and moments of doing-before-thinking. Problems arise when people act without considering the consequences. Explaining that ADHD is disorder that affects how the brain controls those impulses can help your child understand why they have difficulty.

Parents can also play a role in helping their teens develop self-awareness, an important skill that can help control impulsivity. Talking through potential situations where teens may act impulsively is a good place start the conversation. Keys to developing better self-awareness, according to Dr. Davenport, include helping your teen think about who else is around, what is happening in that moment, and what they are thinking and feeling right before the impulsive actions. Asking your teen to think about whether they are overwhelmed, tired, or overstimulated in certain situations can help them discover their own potential tripping points for impulsivity.

Other tools to help lessen impulsivity

Too often impulsive children and teens are considered “bad” or willful because of their behavior.

“The result of ADHD-stimulated actions is often bad behavior, but it is not willful misbehavior,” says clinical psychologist Kimberly Harrison, PhD. “The more often a child is told he or she is ‘bad,’ the greater the chance of emotional dysregulation and low self-esteem as they grow older.”

She uses a two-fold framework to help children and teens take control of impulsivity that she calls “modify the child, modify the situation.”

In the “modify the child” approach, Dr. Harrison recommends using tools that can lessen a child’s impulsivity, including good sleep habits and routines. Proper nutrition is an especially important tool to include if medication is part of their ADHD treatment plan. In the second part, “modify the child,” she asks parents to help their child or teen identify situations where they are more likely to be impulsive.

Talking with teachers to set up supports in school can also help. Often impulsivity happens during non-structured activities, or during lessons that are not interesting to the child or teen. Interest drives attention, she says, so if there are classes that your child doesn’t like, talk with their teachers about setting up supports to help them control their impulsivity during these times.

Learning and practicing these strategies early on can prepare your child or teen for success later in life. These supports will help them act less impulsively in adult relationships and in the workplace, as most children with ADHD will continue to meet the criteria for an ADHD diagnosis as adults.

“It is imperative that your child knows that learning to control his impulses is a necessity in order to avoid a whole list of possible predicaments, including losing friends, losing a job, serving time in detention, or serving time in jail, just to name a few,” says Dr. Davenport.

Join the discussion: How do you help your child or teen check their impulsivity?