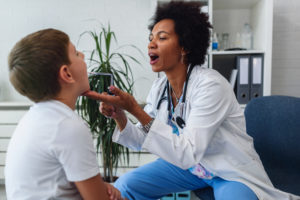 Growing research on streptococcus, or strep infection, and changes in children’s behavior and mental health now includes a possible tie between strep and changes in ADHD symptoms for some children.

Strep throat and other strep infections result from a bacterial infection and are usually treated with antibiotics. Some new research indicates the possibility that strep infections can trigger an autoimmune response that can lead to changes in behavior, mental health, or aggravate existing conditions.

A group of researchers exploring an association between strep infection and chronic tic disorders published their unexpected findings in the spring of 2021. They found no change to tic symptoms or tic disorders in their study. Instead, they observed an increase in hyperactivity and impulsivity in children already identified as having ADHD. Having had strep, in this study, did not make tics worse but did worsen some ADHD symptoms.

“The link between streptococcus and tics in children is still a matter of intense debate,” says study author Davide Martino, MD, PhD, of the University of Calgary in Canada. “We wanted to look at that question, as well as a possible link between strep and behavioral symptoms like obsessive-compulsive disorder and attention deficit hyperactivity disorder.”

The researchers were surprised that there was no association between an increase in tic or OCD symptoms. There was a 17-21 percent increase in ADHD symptoms, particularly hyperactivity and impulsivity.

“New prospective investigations of cohorts of youth with ADHD would provide further details on the relationship between [strep infection] and the natural history of ADHD,” Dr. Martino and his colleagues write.

This is not the first time a possible link between ADHD symptoms and strep infections has been studied. A study in 2009 stated it provides some evidence that pediatric-onset neuropsychiatric disorders, including ADHD, could be related, at least for a short time, to a strep infection. Researchers could not determine if that was due to a stress response to being sick or activation of the body’s immune system.

Another study from 2020 noted having ADHD might make a child more likely to catch and develop an infection, in the same way that a child with ADHD is also more prone to injury because of the symptoms of impulsivity and inattention. They also suggest that the strep infection could then cause autoimmune activity, further affecting symptom severity.

What does this mean when your child has strep throat?

Dr. Martino’s study, and the previous ones, do not state that strep infection, such as the common childhood strep throat, causes ADHD. These studies add to our understanding of how ADHD develops and what physical stresses and experiences can increase or decrease symptoms. They also help us look for new and effective ways to treat ADHD symptoms.

If your child develops the symptoms of strep throat, it is best to contact the pediatrician or other healthcare provider as soon as you can for a medical checkup. The doctor may prescribe antibiotics or other treatment to reduce pain and address infection. If your child also has ADHD, you may want to pay attention to symptoms for a few weeks and let the ADHD specialist or doctor know of any changes you observe. However, there may be no changes in behavior, as all these studies noted a larger number of participants with no change following infection than ones who experienced a noticeable increase of symptom level.

Join the discussion: Has your child experienced behavioral changes after a strep infection?