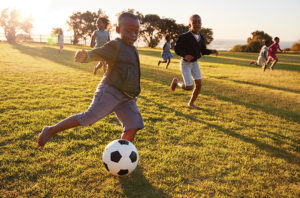 This research UPDATE responds to the question of whether exercise improves ADHD and related challenges. The first study is an overall analysis of existing studies regarding the influence of exercise in treating ADHD. The second study investigates the effects of high and low exercise intensities in children with and without ADHD.

The first study provides preliminary support for the possibility that exercise has a beneficial effect on ADHD, and the second study suggests that the intensity and format of exercise may matter to the mood and behavior of children who have ADHD. Both studies indicate a need for further research to understand whether exercise improves ADHD outcomes.

The three evidence-based interventions for ADHD at present are behavioral management, medication, and a combination of both. Physical exercise as a potential intervention for ADHD may present benefits such as accessibility and low cost. Exercise influences neurotransmitter regulation, which is linked with self-regulation, a significant issue for children with ADHD.

This study reviewed the available literature that examines the effects of exercise on executive function and motor skills for children with ADHD. The research included implemented and tested exercise as an intervention for ADHD compared to no exercise, used specific methodological designs, reported results on ADHD-related outcomes, and had a sample of participants up to 18 years of age who had clinically significant ADHD symptoms. The resulting analysis was based on ten studies that met the above criteria. Most of the studies involved exercise interventions of moderate intensity.

Findings showed that exercise was related to improved ADHD functional outcomes, with a somewhat lower positive effect on executive functions compared with motor skills. These results also suggest that exercise of longer duration was related to more beneficial effects. These findings need to be interpreted in context of limitations within this study, such as an overall lower quantity of studies reviewed, small samples, and a lack of uniform methodology across studies. Due to these limitations, it is too early at present to determine clinical recommendations regarding exercise. Future research should study the effects of exercise on ADHD with a focus on rigorous methodology.

How does exercise affect mood, behavior, and academic productivity?

This research compared the effects of high and low intensity of exercise on mood, behavior, and academic productivity among children between the ages of 6 to 13 years with and without ADHD. One hundred and thirty children participated in this study within the context of a three-week summer day camp. The sample of children with ADHD comprised 78 children who met criteria for being at risk for ADHD.

No differences were found in the effects of high versus low intensity exercise for children with and without ADHD on mood, behavior, or academic productivity. However, results over time did show worse mood and a greater range of behavior difficulties among children with ADHD following high intensity exercise only. Some explanations for this finding are that children in the ADHD group may have had more difficulty persisting in the high intensity exercise, they may not have enjoyed such exercise as much, and they may have felt excluded in such exercise, which sometimes involved group activities such as a game of tag. Among other limitations, the exercise occurred within a summer camp that included recreational exercise in general, which may have possibly diluted the effects of the exercise sessions in particular.

The authors posit that both children with and without ADHD may benefit from high and low intensity exercise, but that the format of high intensity exercise may be related to worse mood and behavior over time among children with ADHD. More research is needed to understand the factors that may influence how effective exercise is as an intervention for ADHD.

Wymbs FA, Wymbs B, Margherio S, & Burd K. (2021). The effects of high intensity versus low intensity exercise on academic productivity, mood, and behavior among youth with and without ADHD. Journal of Child and Family Studies, 1-14.

Yuanyuan Jiang, PhD, is an assistant professor and registered psychologist in the school of counselling, psychotherapy, and spirituality at Saint Paul University. Her research focuses on understanding how attention, behavior, and cognitions relate to each other to learn how to improve assessments and interventions for children with attentional difficulties.

Katrina Aranas, MEd, is pursuing her doctoral degree in school and clinical child psychology at the University of Alberta. Her research interests include the development and improvement of evidence-based treatment options.