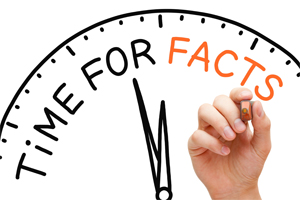 Sometimes, with all the clutter online, it’s hard to know what’s the truth about ADHD. Myths surface on social media and result in criticism and a lack of support for those who have the condition. You can help dispel these myths and better support those in the ADHD community by knowing where to find trusted information and then reading all you can about ADHD from research-based sources.

Tired myths that make the rounds

One of the biggest myths is that children who are hyperactive or who struggle to turn in their homework on time just need more discipline at home.

“When my kids were little, my parents would tell me that I just needed to be stricter and use more discipline with my kids,” says Cari, a Midwest mother of two children with ADHD. “They didn’t understand that my kids didn’t respond to traditional methods of parenting that may have worked for my parents.”

ADHD is a brain-based disorder of behavioral inhibition, says Dan Shapiro, MD. Dr. Shapiro is a developmental-behavioral pediatrician in Rockville, Maryland, and director of the ParentChildJourney.com parent group training and support programs.

ADHD tends to run in families, he says, and is not a result of nurture or lack of strong parenting. The result of the myth kids with ADHD just need more discipline is that “parents of children with ADHD are pummeled with all sorts of advice and judgment. They do not receive nearly enough understanding and support.”

Parents should be supported while raising their children and not catch grief from others because of ignorance about ADHD.

Mary Solanto, PhD, sees some patients who didn’t seek treatment right away due to myths about ADHD. Dr. Solanto is a professor of pediatrics and psychiatry at the Hofstra-Northwell School of Medicine in Long Island, New York, and serves on CHADD’s professional advisory board.

“One of the biggest misunderstandings I hear about ADHD is it’s the result of lack of willpower—and that if the children or adults simply tried harder, they would be able to overcome the problems they are having,” she says.

Individuals with ADHD can struggle with executive function deficits, something that is far from being lazy or having a lack of willpower, writes Thomas E. Brown, PhD, in Attention Deficit Disorder: The Unfocused Mind in Children and Adults. Executive function skills involve the ability to organize, prioritize, focus, sustain attention on a task, modulate emotions, regulate action, and utilize working memory. Individuals with ADHD have impairments in at least some of these functions.

“From the outside, it can really look like kids are being lazy,” says Cari. In addition to having children with ADHD, she’s also an educator of students who have ADHD. “But the reality is that kids with ADHD struggle with getting their schoolwork or backpack organized or figuring out how to manage their time or decide what they need to do first.”

Her children take medication as part of their treatment plan for their ADHD, she says. She’s noticed how much better they are able to prioritize, organize, and manage their time with the inclusion of medication.

“Some believe that stimulants are detrimental to a person’s health and well-being,” she says, “or that they will serve as a ‘crutch’ that will keep people [children and adults] from developing their own positive habits and coping skills.”

This leads to many people refusing or delaying effective treatment options until they are in crisis, she says.

Medication can give individuals with ADHD an opportunity to build skills that they wouldn’t be able to learn without medication. An effective treatment plan often includes medication, says Craig Surman, MD. He is an assistant professor of psychiatry at Harvard Medical School and scientific coordinator of the Adult ADHD Program at Massachusetts General Hospital, as well as a member of CHADD’s professional advisory board.

“If there is functional impairment in two or more roles, then treatment with medication is absolutely what is needed,” Dr. Surman says. That means anyone who has some combination of hyperactivity, impulsivity, and inattentiveness would do well on some kind of prescription ADHD medication.

Get more of the facts on ADHD this awareness month:

Join the conversation: What are some ADHD myths that you’d like to see debunked?