Executive function refers to brain functions that activate, organize, integrate and manage other functions. It enables individuals to account for short- and long-term consequences of their actions and to plan for those results. It also allows individuals to make real-time evaluations of their actions and make necessary adjustments if those actions are not achieving the desired result. 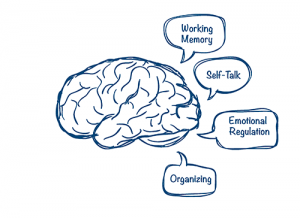 Barkley’s model is based on the idea that inabilities to self-regulate lie at the root of many challenges faced by individuals with ADHD. He explains that individuals with ADHD may be unable to delay responses, thus acting impulsively and without adequate consideration of future consequences―beneficial or negative.

According to Brown, these clusters operate in an integrated way, and people with ADHD tend to suffer impairments in at least some aspects of each cluster. Because these impairments seem to show up together much of the time, Brown believes they are clinically related.

It is clear that executive function impairments have an adverse effect on an individual’s ability to begin, work on and complete tasks. It is also commonly thought that deficits in executive functions are highly interrelated to symptoms associated with ADHD.