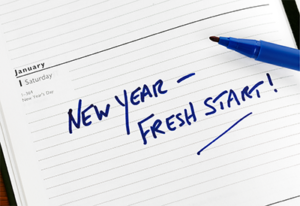 A Fresh Start for the New Year

Have you set your New Year’s resolution? You haven’t? Great; don’t bother setting one.

Forty-three percent of people who start the year with a resolution of some kind end up dropping or breaking it by the beginning of February. Of those who do drop it, thirty-five percent say they simply ran out of motivation to continue.

For some people, setting a New Year’s theme helps them to have a good start to their year. Another set of people choose a series of goals or one large goal to accomplish before the end of the year.

If that’s not your style and you have ADHD, what can help you mark the beginning of the year and not leave you feeling overwhelmed or unmotivated?

Every week is a new start

Adults and teens who have ADHD are great at seeing the “big picture” they’d like to achieve and can feel excited to get started. The newness of the challenge sets off brain chemicals that can make you feel energized and focused. After a little while, that newness fades aways and the rush of energy you had fades with it. Old habits kick back in and can leave you feeling discouraged.

Instead, pick a small habit to replace. Habits can’t be “broken,” says Lama Bazzi, MD, a psychiatrist in private practice in New York City. The trick is to replace the old habit with a new habit and a new or updated routine that goes along with that new habit.

“I need to consciously decide to replace the routine with another behavior from which I can derive similar satisfaction,” says Dr. Bazzi. Starting with small habits and small changes can later snowball to bigger changes—if that is your goal. She suggests you not be concerned with the big changes of a new year’s resolution, but instead use the beginning of your week as the start of one small new habit.

“With a Monday reset, you can set smaller, more reasonable goals and check in with yourself regarding your progress once weekly, instead of yearly with resolutions,” Dr. Bazzi says. “Small changes are the key to success.”

With the idea of a “Monday reset,” if you don’t achieve the small goal or slide a bit in forming the new habit, that’s alright. Starting again on the next Monday simply means you are practicing the new habit until you are ready to pick another new habit for another Monday.

Teens might look at the coming year and pick big, complex goals to achieve. Adults, too, overestimate the changes they want to make in setting their goals. ADHD challenges such as time management and organization can make it difficult to achieve those goals, especially when vaguely defined.

Since the idea is to make small changes, selecting simple goals that you have the tools to achieve now can help you begin. Pick one habit that leads toward your goal to help you start:

“Habits are a way for the brain to automate repeated patterns of behavior in order to ensure we use our awareness more efficiently throughout the day,” Dr. Bazzi says.

Once the first habit becomes automated, she says, pick a Monday to add one new small habit to go along with the first. Continue this pattern until you feel you’ve reached your goal—better bedroom keeping for the teen and more intentional social media use for the adult, as examples.

Take the pressure off the New Year

“It’s probably more useful to look at what’s going on in our lives—if it’s a really good time to make a change,” says Sophie Lazarus, PhD, a psychologist at the Ohio State University Wexner Medical Center.

Not every new year needs resolutions, new habits, or goals, she says. Sometimes, it’s best to just enjoy the fresh start from the turning of the calendar page and leave it at that. There is no need to create situations where you can end up feeling discouraged or disappointed in yourself–especially for teens who may be struggling already in school or socially.

“We sometimes think it’s going to help us get more done or be more productive or make this change we really want to make,” she says. “I think it really tends to just increase our stress and make things worse.”

Instead, perhaps allow yourself, or your teen, the grace needed right now. Life is challenging. Families struggling with ADHD symptoms that affect all aspects of their lives together don’t need to add to those challenges. Teens and adults can benefit from stepping back from the pressure to improve “one more thing.”

“See if you can be a bit gentler with yourself or give yourself this same kind of grace that you might give to someone that you really love or care about who’s in a similarly challenging situation,” Dr. Lazarus says. “What might be more productive is to be more aware of what we’re doing and how it impacts us on an ongoing basis, so that we can be making adjustments in our lives to move toward what we really care about.”

Thinking about a fresh-start approach? We have ideas from previous years:

Join the discussion: How are you taking pressure off the new year?