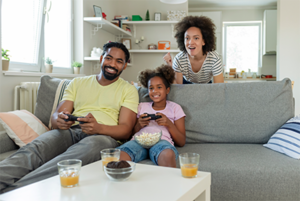 It’s hard not to be drawn into the excitement of a good video game. You might enjoy the fast pace of a multiplayer campaign or the challenge of a matching game, or another option from the far-reaching collection of available games on your favorite platform.

Video games are especially appealing to children and teens who have ADHD. Advances in technology have made them more visually engaging, portable, and social. Some schools use educational video games that help students master new skills. And there’s even a prescription video game that has received marketing approval from the US Food and Drug Administration as a non-drug option for improving ADHD symptoms.

While gaming is fun and potentially beneficial, children can easily overdo it. You may become worried about how much time and energy your child spends playing recreational video games at home.

Ironically, children who have ADHD and struggle with attention can focus on video games for hours on end. The constant stimulation these games offer can make it hard, especially for teenagers, to limit the number of hours they spend playing. Gaming has become an increasingly social activity, offering a less stressful social environment for those who struggle with social skills in person. You might wonder how to help your child find a balance between life in the online and offline worlds.

Effects of video games on the brain

Recent studies have examined the negative effects of increased gaming time on children with ADHD. A 2021 study revealed that excessive gaming led to a worsening of ADHD symptoms among those who participated in the study. Boys seemed to be most at risk. Another study found ADHD symptom severity and impulsivity were contributing factors in excessive video game use.

Parents should be aware that prolonged gaming can be problematic, and the negative effects of gaming can linger long after your child has stopped playing, says Clifford Sussman, MD, a psychiatrist who specializes in video game addiction.

“A process called downregulation causes a drop in the number of dopamine receptors in the reward processing area of the brain that becomes more severe the more time one spends online,” says Dr. Sussman. This may explain some of the irritability a child exhibits after they stop gaming.

Mental health experts see an increase in excessive gaming among children and teens. The World Health Organization first described “gaming disorder” in 2018 as a condition that occurs when gaming takes priority over other activities, such as school or work, and there is an increase in time spent playing video games despite negative consequences lasting at least twelve months or more.

Dr. Sussman says the first thing that parents who are trying to help their child develop good screen habits should do is understand the effects of video gaming on the ADHD brain. Video games can be irresistible for those who struggle with inattention and impulsivity because of how the graphics and actions of the game are designed.

“People with ADHD are more likely than the general population to seek out instant gratification,” says Dr. Sussman. “A shorter wait time between seeking stimulation and receiving it is even more important to the ADHD brain.”

Video games have it all, he says; fast-paced simulations, eye-grabbing graphics, instant rewards, and increased accessibility. For these reasons, those with ADHD may spend hours playing video games without taking bathroom breaks or eating meals.

On a popular social media site for adults with ADHD one user says they played video games for ten hours straight. While asking peers for suggestions on how to better manage their time, the user described how engaging video games can be.

“I stayed up all night to play it, which I’ve done before, but even after no sleep, I continued to play throughout the day, which has never happened,” the user wrote in their post. “I even played it while I was working, which again, hasn’t happened before.”

Parents may see similar behavior in their children. Teens and children who play video games excessively may miss out on social activities, get less sleep, and fail to complete homework assignments. As a result, the teen or child may lose friends, wake up late and irritable, and experience academic problems.

The lure of gaming can become an addiction for some people, says Dr. Sussman.

What’s a parent to do when their child or teen plays video games excessively? Dr. Sussman stresses that parents are key players in helping their child develop good screen habits. If you’re concerned about how much time your child spends gaming, be aware of the amount of time you spend gaming or on a device like a smartphone or tablet. Children model their behaviors based on their parents, so parents have the opportunity to model good habits.

Parents can also help their children find a balance by talking with them about the amount of time spent gaming and helping them set time limits. Dr. Sussman recommends that you make at least one room in the house a screen-free room. Encourage your children or teens to explore other non-screen activities, such as board games or outdoor physical activity.

Dr. Sussman encourages parents who are concerned about their child’s excessive gaming to reach out for help.

“If you see social problems, academic problems, health problems, and/or psychological problems in your children that appear to be related to screen use, consider an evaluation by a psychiatrist trained in internet and video game addiction,” he suggests.

Join the discussion: How Do you help your child set limits on video games?