Video Gaming Disorder Recognized by WHO 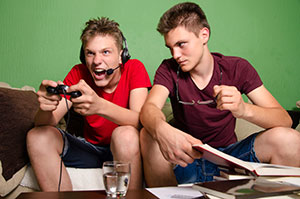 Video gaming remains one of the most popular entertainments. For some people affected by ADHD, the novelty and excitement of video games can be almost overwhelming.
Mental health professionals, including those who study and treat ADHD, remain concerned about video game overuse and the possibility of a gaming addiction. But the World Health Organization in June 2018 declared that video gaming disorder is a mental health condition and listed it in International Classification of Diseases (ICD-11).
The condition is “characterized by impaired control over gaming, increasing priority given to gaming over other activities to the extent that gaming takes precedence over other interests and daily activities, and continuation or escalation of gaming despite the occurrence of negative consequences.” To be diagnosed, a person must be exhibiting symptoms for 12 months or more and be impaired by them in personal, family, social, educational, occupational, or other important areas of functioning.
“I think the ICD-11 category will give us a chance to learn how to identify and diagnose the disorder,” says child and adolescent psychiatrist Victor Fornari, MD.
Video games and ADHD
ADHD symptoms include a drive for novelty and a tendency to perseverate on an enjoyable behavior—to be almost physically unable to stop a behavior the person finds fulfilling. Video games present highly attention-grabbing graphics, changes of pace, rewards for achievement and excitement—all things the brain affected by ADHD craves. For this reason, many people with ADHD gravitate toward all kinds of video games, including personal games on cellphones to multiplayer adventure games.
Research has found, though, that players who have ADHD are at higher than average risk for developing problematic video game playing and experiencing difficulties in stopping and interacting with other people after the games have ended. In the study Video game addiction, ADHD symptomatology, and video game reinforcement, researchers found that players who have ADHD may be at risk for developing symptoms of video game addition and experiencing negative consequences related to it.
“(Video games) tell us more about a brain that may have a problem with impulse control,” says T. Atilla Ceranoglu, MD, a child and adolescent psychiatrist in Massachusetts. More than nine hours of video game play in a week is considered heavy use and is also the point where researchers see changes in a child or teen’s behavior. He added that the fast pace of most video games is more attractive to young people affected by ADHD. “It rewards the impulsive streak. What I find is a video game absorbs a kid (in game play) who otherwise can’t maintain attention.”
Why the WHO listing is important
The WHO listing will help to prompt mental health organizations to evaluate the condition and include it in their own diagnostic manuals. Currently, the American Psychological Association is studying video gaming addiction and had considered adding it to the Diagnostic and Statistical Manual of Mental Disorders (DSM-5). Future editions may include the condition after continued research.
By bringing more of an emphasis to the condition, people and professionals can become better informed. Treatment approaches can be researched and, once recognized, health insurance companies will be able to include it in conditions that are covered by their programs.
“Gaming disorder does seem to respond to psychotherapy, and counseling can be quite effective,” says Petros Levounis, an addiction specialist who chairs the department of psychiatry at Rutgers New Jersey Medical School.
What it means for your video game playing
Most people who play video games do not have a problem, even among those with ADHD. But if you find video gaming is getting in the way of daily life and replacing relationships and responsibilities, it’s time to put a check on it.
For some people, it may mean a weekend’s rest and putting away the video game system, cellphone, or tablet. However, if you find that you or your child cannot set the game down, it may mean it’s time to reach out for some help.
Talk with your healthcare provider or ADHD specialist about your concerns. Dr. Ceranoglu suggests parents do the following if they’re concerned about overuse:
Additional reading:
How do you keep video gaming in check for your family?

Video Gaming Disorder Recognized by WHO

Back Home Again with ADHD: Parents and Adult Children Sharing a Home