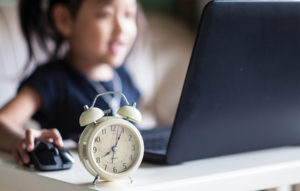 The COVID-19 lockdown has taken our usually functional (and sometime dysfunctional) dependence on technology as a society to a new level. For example, as a child and adolescent psychiatrist specializing in internet and video game addiction, I have converted my practice to video conferencing. Naturally, with the lack of in-person school, camps, and outdoor activities, and the lack of structure and social isolation that comes with it, I am seeing more excessive screen use than ever before, in particular among children with ADHD. However, parents are now more ambivalent about whether the excessive use by their children is problematic, since many of them feel it is the only way they can have any time to do their own work and not have to constantly listen to “There’s nothing to do. I’m bored.”

This article will describe some of the consequences of excessive screen use during COVID-19 for kids with ADHD. Then I will explore what limits need to be set, and guide parents on how to set those limits while creating structure in an unstructured environment.

Is it okay to leave kids with ADHD to their own devices?

Dopamine is the reward neurotransmitter—it flows in the brain in response to rewards and stimulation. The release of dopamine increases significantly when the brain does not have to wait as long for the reward. Activities such as video games, streaming media, and social media, which produce instant and continuous stimulation, can therefore be considered “high dopamine activities” (HDA). In fact, metabolic imaging studies confirm that these activities produce a large amount of dopamine flow. Kids with ADHD are usually driven towards HDA. Due to poorer function in the prefrontal cortex, however, they lack the brakes they need to stop these HDA activities in favor of “low dopamine activities” (LDA), activities that produce more delayed gratification. As a result, they are known to paradoxically focus on HDAs for what seems to parents like endless hours. This situation is confounded by the free unstructured time a lockdown presents and the option of taking virtual refuge from the real world. The result can be your child spending many hours daily (and nightly) “bingeing” on screens.

While the actual time lost to screen bingeing may be more inconsequential during a lockdown, the residual effect on the brain is significant. Over time your child will develop a higher tolerance to dopamine, due in part to a process called receptor downregulation, and therefore will require even more stimulation. This end state is described in peer-reviewed literature as “reward deficiency syndrome,” which is marked by even more loss of interest in LDAs, as if the ADHD symptoms have worsened. This may explain to parents why their children, when allowed unlimited access to the stimulation they seek, seem to just get more bored and irritable during most off-screen activities.

Other consequences of constant screen bingeing may not be fully realized until our children need to get through what may be an entire fall semester of online classes, or to readjust to the typical expectations of school when the lockdown eventually ends.

Parents typically wish for their children to be engaged in activities that are educational or productive in some way, and may lump all other activities, from fishing to Fortnite, as recreational. This categorization does not consider how much patience the activities require. The alternative categorization into high dopamine activity (HDA) and low dopamine activity (LDA) does, even though low vs. high dopamine is a relative continuum rather than binary.

Use the following principle in trying to categorize the activities your children like: The shorter the delay, the more dopamine is released. A life free of all screen time is unrealistic, especially during a lockdown, but if parents want a goal for their children that prevents reward deficiency syndrome, it should be a balance of HDAs and LDAs, with no bingeing on HDA.

The limitations of a lockdown can make finding LDAs difficult, other than the obvious and often unwelcomed ones of homework, exercise, and chores. The following list is a small sample of LDAs taken from a user-generated list in the comments section of my YouTube video titled Parent Survival Guide to the COVID-19 Screen Time Crisis:

Keep in mind that LDAs can even include activities on a screen, if they are activities with more delay in gratification, such as coding, writing with a word processor, or editing a photo in Photoshop. Don’t be fooled by educational or creative videos and games, however; they may be great learning aids, but they are often designed to keep your kids using them endlessly.

When a man with alcohol use disorder walks into a bar, his brain begins to release more dopamine before he has had his first drink. This is a response to the cues in the bar, including the sights, sounds, and smells that he associates with anticipating a drink. If a room in a home is stocked with digital devices, including computers, TVs with gaming consoles, and smartphones, this may have the same cue-based effect on your child, leading to engagement in HDAs as if your child is on autopilot.

Parents should consider creating a screen-free “zone” in the home—perhaps a living room or basement—that is filled with books, board games, or other LDAs. They may also consider removing all additional devices in the room where your child does on-screen LDAs, such as virtual classes, and having the child use a different computer with fewer apps than the one they use for gaming.

If children have structured LDAs planned for each day, such as Zoom visits with relatives or online music classes, they are less likely to wind up doing an HDA during those times. A whiteboard in the kitchen may be a good place for a daily LDA schedule, with a long menu of LDAs your child helped create to fill it in. Healthy family routines such as screen free family dinners, everyone charging their cellphones outside their rooms at night, and parents modeling balanced activity choices themselves, will also set your kids up for a healthier lockdown.

How can we set limits in a lockdown?

To prevent screen bingeing, parents should focus more on the need to discontinue the HDA after a limited amount of time each session than how many total hours of screen time per day the child has. Ideally the time limit should be an age-dependent, consistent one, such as half an hour per session for a seven-year-old and an hour per session for a fourteen-year-old. The consistent length of time will allow your child to maintain a better real-world sense of time to counter the time distortion inherent with immersion in a virtual world. It will also reduce the power struggles that may occur if the timer alone fails to get your child off the device.

More importantly, each block of HDA should be followed by a block at least that long of LDA. If the number of daily sessions increases, the total number of screen hours per day rises. However, the number of times your child has to put on the brakes also rises. And each time they wait for their next HDA session they are exercising delayed gratification, which both allows the brain to restore its dopamine receptors and teaches children a skill they will need to succeed in life.

Parents who find themselves continually monitoring their children to ensure they follow these limits will find that not only is the task impossible, it will create less independence and ability to self-regulate. Clearly explaining the rules and the consequences beforehand, and doing random checks is more effective. You won’t catch them every time, but if they tend to binge you will catch them often enough.

If your child violates the screen limits you set, remember that child with ADHD is more likely to respond to a logical, immediate consequence that has been agreed on beforehand than a delayed one. Some examples include:

Once the consequence is stated, there is no need to stick around and bargain or engage in a power struggle. You can always leave and return later if they are still not cooperating.

If you see aggressive behaviors, suicidality, stealing, lying about screen use, and other problematic behaviors that hinder your ability to set screen limits, you may need professional help, and should consider a psychiatric evaluation.

Clifford Sussman, MD, has a private practice in psychiatry for children, adolescents, and young adults in Washington, DC. His guide to healthy technology use for ADHD was featured on the cover of Attention magazine (Winter 2017-2018 issue). He has been featured as an expert on internet gaming disorder in several well-known media sources, including CBS News, the New York Times, and TIME for Kids magazine. As an author of peer-reviewed literature, a frequent public speaker, and the expert consultant to the digital use disorder track at Caron Renaissance in Florida, he is internationally known as a pioneer in treating internet and video game addiction. He is dedicated to helping people achieve a more balanced relationship with digital technology. Dr. Sussman completed an adult psychiatry residency at Western Psychiatric Institute and Clinic in Pittsburgh, Pennsylvania, and a child and adolescent psychiatry fellowship at Children’s National Medical Center in Washington, DC. He has over ten years of experience treating digital addictions. He also treats patients with comorbid conditions, such as ADHD and ASD. For more information on setting screen limits, visit www.cliffordsussmanmd.com.

I’m Fine, Thank You Very Much!

Should My Child Be Evaluated for ADHD During the COVID-19 Pandemic?

Going to College Online with ADHD