THE DIGITAL AGE HAS NOT ONLY ARRIVED, but by now it has settled in. As a child and adolescent psychiatrist specializing in internet and video game addiction, I see the most extreme cases of problematic internet and video game use, leading to catastrophic consequences in grades, social life, emotional well-being, and relationships with family members.

Children, adolescents, and young adults with ADHD have proven to be one of the groups most vulnerable to these problems, and make up a large part of my client base. The question I am asked frequently by the parents and family members who seek my help or attend my presentations is, “How do we limit screen time in our children with ADHD?” This article is a brief guide to navigating your loved ones with ADHD successfully through a digital world. 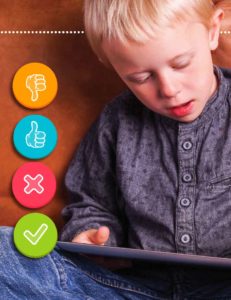 Understand the scientifically proven effects of screen time on the ADHD brain.

The virtual world is an alluring distraction and escape for youth with ADHD, particularly the inattentive presentation, who already are more easily distracted and more prone to procrastination. Difficulties with impulse control makes those with ADHD less likely to stop and think before acting, which is often required to resist the temptation of digital technology.

People with ADHD are more likely than the general population to seek out instant gratification. A shorter wait time between seeking stimulation and receiving it is even more important to the ADHD brain than the type of stimulation. Stimulation from internet and video games is more readily available than ever before, thanks to easy access to devices such as our smartphones and laptops, faster connection times, faster processors, customized browsing, and many other evolving features of digital technology. And once we are online, the content is designed to keep us online, using constant introduction of novel stimuli with effective reinforcement techniques, as well as the promise of mastery. Those with ADHD may feel that the playing field is leveled when they are playing a video game or surfing the internet, because they can successfully pay attention for many hours.

What many of my clients and their families don’t realize is that for those who receive digital entertainment for several hours on end, the negative effects continue even when they are offline. A process called downregulation causes a drop in the number of dopamine receptors in the reward processing area of the brain that becomes more severe the more time one spends online. An explanation of this process is demonstrated in a video that can be accessed from my website.

ADHD is already characterized by less dopamine receptors, which explains the sensitivity to boredom, stimulation seeking, and responding to psychostimulant medications that boost dopamine levels. Therefore, until the receptors come back to baseline level, one can expect a temporary worsening of ADHD symptoms following long video game or internet sessions. In some cases, restoring these receptors may take days to months of decreased screen time. In theory, the quickest method would be a temporary “digital detoxification” (a period of abstaining from all screen-based sources of instant gratification such as video games and internet use), which may be accompanied by discomfort (“withdrawal”) and increased cravings to get back online.

Kids often learn more from observing what parents do than what they say, a phenomenon called “modelling.” I often see dysfunctional screen habits in the parents of my clients, particularly when they have ADHD as well.

It is important for parents to set a good example with their own digital behaviors. Examples include not using cell phones during family meal time, spending more time off the computer and interacting with the children, and finding more family activities that do not involve sitting around a screen. It is important for parents of young children to avoid using devices and television during meals for distraction feeding or during playtime as a “digital babysitter.”

It is a good idea to set aside a room in the house that is tech-free: No electronics and a box at the door where people can leave their devices when using the room, which may be well-supplied with books, board games, and crafts. Parents should try to limit their own periods of any screen entertainment, including TV, to an hour or less at a time, with at least that long a break before the next period. This is a good limited-use guideline for children as well.

Perhaps the most effective way to establish healthy technology habits for children with ADHD is for parents to pro- vide the children with many structured activities in their schedule, with plenty of physical activity and a few long periods of downtime, especially on weekends. Assistance with time management and helping children to divide large assignments, such as homework projects, into smaller ones, may help keep children on task.

The American Academy of Pediatrics recommends different screen time guidelines for different ages, and provides an app to create and print out a personalized family media plan at www.healthychildren.org/MediaUsePlan. This encourages parents to start shaping future screen time habits as early in a child’s life as possible, which is especially important because apps are now available for children of all ages, including infants. It is important to understand normal social development, which predicts that younger children are less autonomous and more likely to follow parental guidance when it comes to screen rules.

Adolescents, on the other hand, can be very skilled when it comes to choosing their own screen habits, regardless of what they are told. In my experience, teens may be much better than their parents realize at hacking their way through parental controls or accessing a friend’s devices when theirs are confiscated. They are also more susceptible to the fear of missing out when they cannot go online. As a result, I find that parents who try to control and micromanage the online behaviors of their teens and young adults are often bogged down in constant power struggles and frustrated by futility.

Sometimes the most effective approach is to provide psychoeducation on healthy screen use and help teens to be aware of the consequences of their behaviors, rather than shielding them from such consequences. I have unfortunately seen the latter several times in well-intentioned parents who will call in sick for their teenagers the morning after they stay up all night playing video games.

Healthy screen habits promote responsibility and independence, a common goal that both parents and their teens share. The closer the teenager gets to college or work, the more important it will be for them to learn to self-regulate their own screen time, as they will likely transition to find complete freedom to spend as much time on screens as they choose.

Identify internet and video game addiction, and get help when you do.

The essential feature of a substance use disorder is that the individual continues using the substance despite significant substance-related problems. The brain’s response during use of internet and video games is remarkably similar to its response during use of problematic substances, particularly in the reward processing area of the brain mentioned previously. Therefore, if you see social problems, academic problems, health problems, and/or psychological problems in your children that appear to be related to screen use, consider an evaluation by a psychiatrist trained in internet and video game addiction. Watch the educational videos on my website (www.cliffordsussmanmd.com) for more information on internet and video game addiction.

Treatment may include medication management, for which there is limited research, but should always include individual and/or group psychotherapy and may be coordinated with family therapy or parent training. A provider with experience in motivational interviewing, a technique designed for substance use disorders, may be beneficial in cases in which the affected youth has ambivalence about changing their screen habits. Al-Anon meetings (www.al-anon.org) may provide some helpful strategies for parents who support adult children with ADHD and technology addiction at home who are “failing to launch.” A program near Seattle called Restart (www.netaddictionrecovery.com) can even provide inpatient rehabilitation for internet and video addiction, and similar programs may be available soon in other locations throughout the United States.

Clifford Sussman, MD, has a private practice in psychiatry for children, adolescents, and young adults in Washington, DC. He has served on multiple expert panels discussing digital technology addiction with various schools around the region and gave multiple presentations on the topic for the 2017 annual AACAP meeting. His website is www.cliffordsussmanmd.com.

First Put on Your Own Oxygen Mask: Be a Better Parent by Caring for Yourself

How Do I Get My Kid to Talk TO Me Instead of AT Me or NOT At All?

Steps to Take Before Sending Your Student to College

Put Down the Stick, Pick Up a Feather: Adult ADHD & Self-Criticism

Do You Know ADHD?

ADHD and Criminal Justice, Part One: The Punishment Mindset and School Discipline

Are Concussion and ADHD Related?