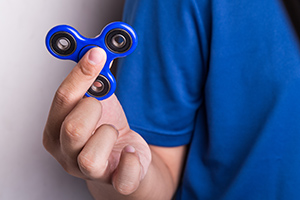 Is that spinner in your child’s hand the latest fad or a tool to improve his attention? Parents and teachers are working to figure it out as we reach the end of the school year.

Fidgets are small items that fit in one’s hand that offer an opportunity for sensory stimulation and motion. If you’ve ever found yourself clicking a pen repeatedly or twirling a paper clip while thinking, you’ve experienced the benefit of fidgeting while working through a problem or keeping focused on a task.

Anyone concentrating on a problem or maintaining attention on a conversation can find himself fiddling with a small item, but those affected by ADHD may find specific help in handling a fidget.

Fidgeting may provide benefits for those affected by ADHD. Research seems to be backing up many people’s experience that fidgeting improves concentration and cognitive performance—thinking through and solving a problem—for those diagnosed with ADHD.

Some fidgets can disrupt the classroom

Extremely popular right now are fidget spinners, which have three arms joined in the middle by a spinning disk. Also recently released are fidget cubes, which have a different activity to manipulate on each side. The idea is that a person can handle one of these fidgets as something to keep his hands busy, helping his mind remain focused on the topic or task he’s working on. Fidget items aren’t limited to spinners and cubes. Any small toy or item, including a variety of school and office supplies readily found on your desk, could become a fidget for anyone.

Fidget spinners and cubes are often marketed for children with attention issues, but they’ve also been picked up by others as interesting toys. This has presented a problem for many teachers and often whole school districts; the items can be used by anyone as a toy that can distract other students. In some cases, fidget toys have been thrown in classrooms, becoming a hazard, or are treated as collectibles that are shown and traded at inappropriate times. This has led to bans on fidgets altogether by some school districts.

Carroll Gardens School for Innovation/M.S. 442 in Brooklyn informed parents on its Facebook page of its ban on the toys.

“They are also being thrown around in the hallways during transition to and from class and in the cafeteria and at recess,” it posted. “They are small in size, but can seriously hurt someone. In an effort to prevent injuries, we must officially ban these fidget spinners from being brought into our school.”

The school added, “Please note that if your child has a sensory issue and needs a fidget, we have them on hand.”

Best use of fidgets in the classroom

“I find that items that have movement to them (fidget cubes, clay or Silly Putty, etc.) work well in mainstream classrooms because they are unobtrusive and don’t make noise,” says Ann Marie MacDonald, a special education teacher at the Hilton Central School District near Rochester, NY. “Students don’t want to draw attention to themselves so they prefer things that are quiet and fit in their hands.”

Ann Marie MacDonald keeps a basket of fidgets in her resource classroom to assist her special needs students, and those items sometimes go with students back to their regular classrooms.

“I find that students who struggle to pay attention, especially in lecture-based classes, tend to find it easier to focus on what the speaker/teacher is saying when they have something to keep their hands busy,” she says. “I have students who use them when they are taking tests or working on various assignments (especially writing).”

Ms. MacDonald began using fidgets with her students before the popular fad began, she said. She noticed her students struggling to maintain attention and suggested they use Silly Putty to occupy their hands.  Afterwards she began adding other fidgets, including small Rubik’s Cubes, puzzle pieces, clay and other small items and toys that fit in a child’s hand. Now, she says, her students show her new fidgets that come on the market and help her expand her basket.

Fidgets are not banned in her school, and she sees the students there using the fidgets appropriately.  She does know of schools where that hasn’t been the case and thinks that school principals and districts need to make the decision on allowing them for general use on a case-by-case basis.

“I do think that the fidget spinners are distracting for some students,” Ms. MacDonald says. “However, I also have students who use them without making noise or drawing attention to themselves, who find them beneficial to have in their hands while they do classwork or homework.”

Should you give your child a fidget?

If your child could benefit from a fidget item, discuss this during the 504 plan or IEP meeting. It may be necessary to have the fidget item written into the educational plan as an accommodation. When you do, you should have in mind the classroom situations your child experiences and in what way the fidget could be useful.

Not every fidget item is appropriate for school, and not every child will benefit from the most popular items.  Work with your child to decide if a fidget is a good item and test out a few items while doing homework before selecting one that could go to school.

Things to consider when asking for a fidget item as an accommodation:

Does your child use a fidget item to improve his focus while doing schoolwork?

They seem to be everywhere – fidget spinners, cubes and toys—but do they really help children pay better attention in the classroom? Maybe you are thinking about having your child experiment with some of the new fidget toys during the summer to use as possible accommodations next school year. Keep reading for information on these popular focusing tools for children.

Getting the Most from Screen Time this Summer