Could Your Child’s Meds Affect His Height? Likely Not 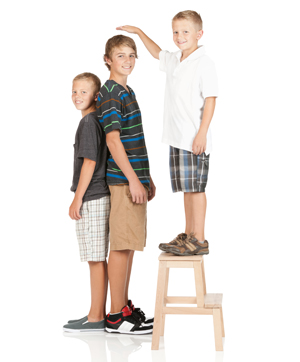 Could your child’s height be affected by his ADHD medication?

Well-meaning family and friends may tell you they’ve heard that stimulant medications will prevent your son or daughter from reaching full height. But is that true? The answer is not as simple as yes or no, so we reviewed the research and talked with CHADD’s professional advisory board. Here’s what you need to know before you discuss this question with your child’s doctor.

Stimulant medications commonly prescribed for ADHD will cause children to miss their growth spurts and be shorter adults than they would have been without medication.

Some people think medication could cause diminished height due to appetite suppression, a common side effect of stimulants. Failing to eat enough and receive good nutrition in childhood is known to prevent someone from reaching their potential adult height. For young people with ADHD this has not been proven to be a definitive cause of reduced height.

Stimulant medication has been used since the late 1930s to treat symptoms we now recognize to be part of ADHD. Beginning in the 1960s, Ritalin was prescribed for children with ADHD, then known by various names, including hyperkinetic disorder of childhood. It continued to be the preferred medication through the 1990s, when Adderall was introduced. There are now several brands of stimulant medications available. Researchers have been able to follow children into adulthood for several generations who have received treatment with stimulant medications to better understand potential side effects of prescribed medications, including their effect on height.

Several studies have tried to determine whether stimulant medications can stall a child’s growth or reduce his height at adulthood. The results have not all agreed, which has complicated the answer for parents and prescribers.

Studies that showed a reduction in height:

Young adult outcomes in the follow‐up of the multimodal treatment study of attention‐deficit/hyperactivity disorder: symptom persistence, source discrepancy, and height suppression. Researchers on this study were involved in the Multimodal Treatment Study of Children with attention-deficit/hyperactivity disorder, and followed up with participants from that study. They found that for participants who continued with medication there was a reduction in expected adult height of 2.36-2.55 centimeters (about 1 inch). However, when they compared participants who had ADHD to those who did not, researchers saw that those with ADHD were an average 1.29 centimeters (about half an inch) shorter than their peers, whether they took medication or not.

ADHD stimulants and their effect on height in children. In this review of multiple studies, the author notes that a loss of expected height is relatively small while a child is receiving medication but appears to be reversible when medication is discontinued. The reduction in height appears to be connected to appetite suppression and the possible suppression of growth hormones while taking the medication. The author also notes that previous studies had shown that planned “medication holidays” were effective in allowing the child to have a growth spurt in order to reach his expected height.

Studies that did not show a reduction in height:

ADHD, Stimulant Treatment, and Growth: A Longitudinal Study. Researchers reviewed the medical records of 340 adults who had a childhood diagnosis of ADHD and noted if they had been prescribed stimulant medication. They were interviewed as adults and their height recorded. This information was compared to that of a control group of 680 adults. Researchers concluded that stimulant medication was not associated with difference in adult height or significant changes in their growth. They did note, as an example, that those with ADHD had a height difference of slightly less than half an inch from peers in the control group, whether or not their ADHD was treated with stimulant medication..

Associations between Attention-Deficit Hyperactivity Disorder (ADHD) Treatment and Patient Nutritional Status and Height. This study was primarily concerned with participants’ weight and risk for obesity and how stimulant medications might be helpful for weight control. As part of the study, height was monitored. Researchers saw a reduction in risk for obesity but saw no significant impact on height. They concluded that stimulant treatment had no effect on the participants’ adult height.

What researchers have to say:

“In a small number of children, there may be a small slowing of growth leading to a height 1-2 centimeters below projected level,” says Max Wiznitzer, MD. A pediatric neurologist at Rainbow Babies & Children’s Hospital in Cleveland, Ohio, Dr. Wiznitzer is an associate professor of pediatrics, neurology, and international health at Case Western Reserve University. He is the co-chair of CHADD’s professional advisory board. “However, in the majority, even if a deceleration of growth occurs, there is catch up during puberty.”

Dr. Wiznitzer referred back to the Multimodal Treatment Study, which had data suggesting that the children with the most obvious change in height were among the tallest 25 percent of participants, while those in the shortest 25 percent had no significant height difference. Dr. Wiznitzer notes that other studies have not identified any significant effect on growth while children are taking medication.

Other reasons for a slight decrease in height could be a coexisting condition such as fetal alcohol syndrome, or how ADHD itself affects physical maturity and growth. While medication may not be a cause, a side effect related to medication could also play a role.

“For those children who do not eat well on stimulant medication, there may be a growth slowing, which may be a source of this concern,” he explains.

“Neither childhood ADHD itself nor stimulant medication [is] associated with shorter stature as adults,” says Slavica Katusic, MD, an associate professor of pediatrics at the Mayo Clinic in Minnesota. Dr. Katusic followed 340 children with ADHD and 680 children without the diagnosis for 26 years in order to measure their adult heights. “We compared their height when they were children and when they were grown up. Stimulant medication did not affect children’s final height as adults.”

The American Academy of Pediatrics has also stated that medication does not appear to play a role in children’s eventual adult height.

Parents can be reassured that medication has a minimal to no effect on their children’s potential adult height. Other possible factors, including nutrition or maturity differences related to ADHD, could play a larger role in any possible reduction of height than has been previously considered by researchers.

“This is not a major concern,” Dr. Wiznitzer says. “It is simple and easy to monitor growth so any intervention (nutritional, change in medication or the dose, evaluation for other causes) can be implemented.”

If parents and prescribers do suspect a delay in growth, they can discuss how much change in height could be expected and the benefits and drawbacks to either a medication holiday or discontinuation of medication if needed. But most families won’t see a noticeable height difference, even if one occurs, he says.

“The change in height, when it occurs, is not so severe as to change prospects for joining a basketball team,” Dr. Wiznitzer reassures parents.

Join the discussion: Have you talked with a doctor about stimulant medications and adult height?

Plan Vacations Everyone Will Enjoy

Could Your Child’s Meds Affect His Height? Likely Not