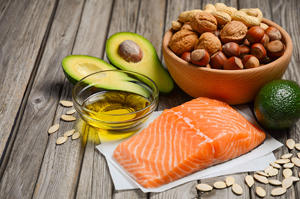 Question: A friend recently sent me an email claiming that I could take my son off of his stimulant medication if I gave him fish oil every day. Is this true, or does the whole idea seem fishy to you?

Answer: We are learning more about omega-3 fatty acids, which are present in higher amounts in fish oil than in other foods, and how they help the brain function better. Researchers do not suggest that anyone taking a stimulant medication, or any other medication prescribed for a brain-based health condition, discontinue their medication. But they are learning that adding more omega-3s to one’s diet may help improve ADHD symptoms.

What is it about fish oil, omega-3s, and the brain?

Omega-3s are essential fatty acids, meaning they are necessary for good health, but our bodies can’t make them. We consume them from food sources, primarily fish and grass-fed meats and dairy, but also from a few plant sources, such as walnuts. Fish high in omega-3 fatty acids include mackerel, lake trout, herring, sardines, albacore tuna, and salmon. Fish oil, taken as a liquid or in a gel capsule, or omega-3 supplements that can come in various forms such as gummy candies, are also good sources of omega-3s.

Our brains use omega-3s in several ways, including as a fuel source and as a tool to reduce inflammation. This inflammation in the body and brain could be related to several health conditions, such as diabetes, depression, heart disease, and some cancers. The brain also uses omega-3s in the memory center of the brain—the hippocampus—when making new memories.

ADHD symptoms are believed to be related to a difficulty in brain cells sending and receiving neurotransmitters, which are brain chemicals that communicate information from one cell to another. Omega-3s are part of brain cell membranes and may help neurotransmitters to better carry signals among brain cells.

“The brain has a huge number of cell membranes, and cell membranes are made out of fat,” explains psychiatrist Emily Dean, MD, in Your Brain on Omega-3 for Psychology Today. “The fat content of the brain is a little different than the rest of the body—the only polyunsaturated fatty acids allowed into the healthy brain in any appreciable amount are the omega-3 DHA (a long-chain omega-3 present in fish oil and grass-fed meats) and the omega-6 derived (or obtained directly from animal foods) arachidonic acid. In addition, while arachidonic acid is found in equal amounts all over the brain, DHA is found predominately in the gray matter. That’s where our thinking takes place.”

When Dr. Dean reviewed the research, she says she saw how consuming fish oils and omega-3s show positive effects on the brain.

“What do I conclude from a common-sense analysis of the massive change in our diets [during the past century] coupled with a knowledge of how omega-3s are important for our neurons?” she reflects. “Our brains seem to be designed to run on fish oil.”

What researchers are learning about omega-3s and ADHD symptoms

You’ve asked what omega-3s can do regarding ADHD symptoms. In the studies below, researchers found that some subjects who consumed additional fish in their diets or took fish oil or omega-3 supplements showed improvement in their ADHD symptoms:

Omega-3/Omega-6 Fatty Acids for Attention Deficit Hyperactivity Disorder: A Randomized Placebo-Controlled Trial in Children and Adolescents
This study showed mixed results when a group of teen boys received omega-3 supplements. After six months, less than half of the teens in the study showed improvements. But, 1 out of every 8 teens in the study did show an improvement and that improvement was significant. When the study was extended an additional three months, almost half of the entire group of teens did show some measurable improvement.

High-dose eicosapentaenoic acid (EPA) improves attention and vigilance in children and adolescents with attention deficit hyperactivity disorder (ADHD) and low endogenous EPA levels
Researchers studied 92 children between 6 and 18 years old who have ADHD in a randomized controlled trial for twelve weeks. The children were given either omega-3 fatty acid EPA or a placebo. The researchers also measured the children’s blood level of EPA (eicosapentaenoic acid, a polyunsaturated fatty acid commonly found in fish). The researchers found that the children with low EPA levels showed improvement in their abilities to focus and maintain attention. However, the children who had normal or high levels of EPA did not have any improvement in their ADHD symptoms, and some displayed an increase in impulsivity.

“It most likely wouldn’t hurt to try using omega-3 supplements in kids together with their medication, as it might give some extra alleviation [of ADHD symptoms],” says Dienke Bos, a researcher at the University Medical Center Utrecht in the Netherlands.

However, even though supplementation might reduce symptoms, the improvement generally is not as much as one can expect when taking medication. Also, a 1-in-8 ratio of those who might benefit is a low likelihood of its being an effective primary treatment.

“My opinion at the moment is that if there is any benefit, it is modest, nowhere near what one gets with [US Food and Drug Administration]-approved medications,” says researcher and author Russell A. Barkley.

Thinking about adding fish oil or supplements to your treatment plan?

Research does show fish oil and omega-3s to be helpful for brain function, reducing inflammation and possibly reducing risks of cognitive decline, heart disease, and depression. Fish oil and omega-3s might decrease ADHD symptoms for some people, but how much will vary for each person. As a complementary intervention, some people will benefit from adding more omega-3 sources to their diets.

“High blood-levels of EPA without using supplements can be achieved through a good diet with plenty of fish, which is common in some Asian countries like Taiwan and Japan,” says Kuan-Pin Su, MD, PhD, co-lead researcher from China Medical University in Taichung, Taiwan. “It is possible that EPA deficiency is more common among children with ADHD in countries with less fish consumption, such as in North America and many countries in Europe, and that fish oil supplementation could therefore have more widespread benefits for treating the condition.”

Both studies cited above, along with other research, do not show that fish oil or omega-3 supplements could replace prescribed medications for ADHD. Your friend’s email, while well-meaning, is incorrect in suggesting your son could stop taking his medication in favor of fish oils.

It’s best to discuss this intervention with your child’s doctor before adding a supplement or fish oil to your child’s, or to your own, treatment plan. There can be side effects from adding fish oil to your routine, especially if taken in large amounts, and they can be a concern if there is a need for emergency medical care or interactions with other prescribed medications.

To learn more about fish oil or omega-3 supplements, especially before purchasing them, read:

Join the discussion: Do you or your child take fish oil or omega-3 supplements? What has been your experience?