After the Storm: Weathering Disaster and Managing ADHD 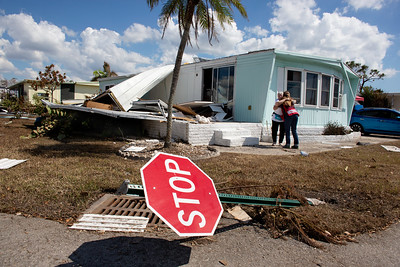 “I had to pull myself together and get through it.”

Liliana Gutierrez and her family survived Hurricane Ian, even as the massive storm moved their house off its foundation and the walls began to crumble.

With her mother, Maribel Gutierrez, Liliana and younger family members fled their house only to be met by a wall of water that threatened to sweep them apart.

“The water, we were being moved left and right, and we sometimes lost our grip, but we were able to grab onto each other once again,” Maribel Gutierrez says. The family was able to reach a neighboring house and make it to the second floor. From there they waited out the hurricane.

“It was really, really, ugly, so horrible,” says Maribel Gutierrez. “We lost everything. We’re left with not one single thing.”

After the storm: coping with trauma and ADHD

In the face of disaster, people can feel displaced, confused, and scared. For adults and children who have ADHD and their families, symptoms can make these normal reactions worse.

Sam Goldstein, PhD, an expert on resiliency and ADHD, and a former member of CHADD’s professional advisory board, says people who have ADHD face particular challenges when it comes to managing disasters.

“They often miss critical cues in the environment necessary to shift behavior,” Dr. Goldstein says. “They have trouble doing what they know consistently, predictably, and independently, and they are less likely to be prepared and more likely to respond in non-thinking, impulsive ways in the face of problems.”

Post-traumatic stress disorder, PTSD, which can co-occur with ADHD before a natural disaster, is the most common mental health condition following an event such as a hurricane. The symptoms of PTSD and ADHD can aggravate one another and leave someone feeling overwhelmed following the disaster.

“In the immediate post-hurricane period, social support is incredibly important,” says Ian Stanley, PhD, an assistant professor at the University of Colorado School of Medicine and psychological health lead for the CU Anschutz Center for Combat Medicine and Battlefield Research. “Check in on one another; send messages of support; and offer to plan an enjoyable activity. For kids, it is important to emphasize that what happened is not their fault and to express hope for the future.”

A charter boat captain and lifelong resident of Naples, Florida, returned to his home following Hurricane Ian. It was beyond repair. The city of Naples was devastated by the hurricane storm surge, destroying the landmark Naples Pier and major sections of downtown.

“Everything we knew is different now,” the captain says. “This is unbelievable. I mean it’s just it’s truly a nightmare. It’s something that I wouldn’t wish on anyone. And it just happened to every single person I know.”

“There is a broader societal context—a collective trauma—that presents unique challenges and opportunities,” says Dr. Stanley. “On the one hand, this might mean that more people around you are struggling, and it might be difficult to access support systems. On the other hand, there is a phenomenon known as the ‘pulling together effect’ in which individuals undergoing a shared traumatic experience are more likely to support one another, thus strengthening social connectedness.

All of us can better cope with disaster if we have developed a mindset that allows us to deal with adversity that may be unexpected and uncontrollable, for which there could be sudden and significant consequences, says Dr. Goldstein.

“Individuals are better able to handle disaster if they can recognize what they can and cannot control,” he says, “if they develop strategies to manage stress, strive for empathy, communicate effectively, accept themselves, connect to others, be self- disciplined, and develop strategies for maintaining a resilient lifestyle even in the face of stress.”

Children are vulnerable in times of crisis, not only physically but emotionally and mentally. Parents can help their children cope with disaster by first and foremost providing them with a sense of safety, says Rahn K. Bailey, MD, a psychiatrist and the department head of psychiatry at LSU Health Science Center School of Medicine.

“The child has to feel safe, and safety is a function of the environment that the parent creates,” Dr. Bailey says. “It is up to the parents to inform and instruct their children in age-appropriate language. The children need to feel comfortable and confident that their parents will keep them safe, and it’s the parents’ job to create that type of environment in what they do and say.”

After Hurricane Katrina barreled through New Orleans and surrounding Louisiana and Mississippi in 2005, psychologist Jeffrey Katz was sent to Mississippi to contribute to relief efforts. At that time, Dr. Katz was in charge of disaster mental health services for the American Red Cross Disaster Team. He is now co-chair of CHADD’s public policy committee.

Communication, says Dr. Katz, is essential when coping with a crisis. Parents should work hard to understand what their children are feeling and let the children know that they are safe, the family is together, and they are going to get through the crisis.

“Don’t lie to your children,” he says. “First convince yourself that things are going to be okay, and then convince your kids.”

He recommends parents talk with their children about other times when they dealt with distress and discuss how they coped.

“Help them reconnect with their coping skills,” Dr. Katz says. “Let them know, as much as possible, step by step, what you’re going to do.”

The question What comes next? will weigh on the minds of anyone who has survived Hurricane Ian. Local and state agencies are working to restore the basics of water and sewer services, power and internet connections. National cellular phone companies have brought in mobile cell towers to restore phone service in southwest Florida.

Many areas are currently unsafe to return to for anything more than to retrieve belongings. Some locations, including Sanibel Island off the coast of Fort Myers, Florida, are unreachable except by helicopter. The storm surge tore out sections of the causeway that connected the island to Fort Myers.

However, many restaurants have found ways to open despite lacking electricity, in order to help feed their communities. Volunteers from Florida and across the United States are arriving to help, first with rescue and cleanup efforts, and later with rebuilding. Counties hit by the hurricane plan to reopen schools the second week of October.

Belynda Gauthier, past president of CHADD’s board of directors, is a founding member of the Louisiana Capital Area Chapter of CHADD. She experienced Hurricane Katrina and can reflect on what the aftermath of Hurricane Ian may be like for the people in Florida.

“The ripple effect of the storm is seen in areas of life that no one had even imagined,” she says.

Awareness of the toll stress takes on families affected by ADHD and knowing there will be new and unexpected stressors during the weeks and months following Hurricane Ian will be an important part of recovering from the storm.

Dr. Katz says to expect feelings of frustration as the cleanup continues.

“People with ADHD tend to want immediacy,” he explains. “Day by day, things are getting better, and it’s important for individuals to take the long view.”

Dr. Bailey suggests parents help their children by reminding them that “things that made them happy before the disaster, such as soccer, church, and friends, can occur in a new place with new people.”

“We must help [children and adults] understand, at a level consistent with their development and emotional capabilities, what such a disaster means,” says Dr. Goldstein, “but also provide them with opportunities to help others and develop hope.”

Acceptance, connection, and care are important at this time, he says. Applied together and with consistency, they can help to build resilience following a disaster.

“Acceptance of what you can and cannot control, connections to others, and care by helping others,” he says. “Not as a way of avoiding personal feelings of loss, grief, sadness, or worry, but as an effective way to ease pain and stress.”

A version of this article appeared in Attention magazine, December 2005. This version has been revised following Hurricane Ian in September 2022.

After the Storm: Weathering Disaster and Managing ADHD

Resources That Can Help Following a Crisis