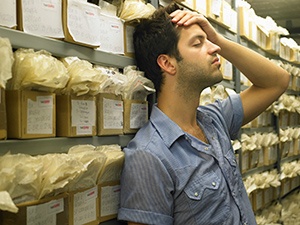 Recently, a member of the Attention Connection community posted in Questions & Answers about the difficulty of diagnosing co-occurring ADHD and PTSD.  Diagnosing both conditions at the same time can be hard, especially when they share symptoms. Why is this?

While the underlying causes for the behaviors are different, ADHD and post-traumatic stress disorder—frequently referred to as PTSD—have similar symptoms. Inattention, distraction, restlessness, outbursts, depression, sleeping problems, memory issues—these and other symptoms are hallmarks of each disorder.

ADHD professionals don’t routinely include an assessment of trauma during an ADHD evaluation. What do you need to know about PTSD and its impact on your ADHD?

What is post-traumatic stress disorder?

PTSD is an anxiety disorder that develops in response to traumatic or life-threatening experiences, including war and acts of violence or abuse, accidents, sexual assault, or natural disasters. Symptoms can be emotional or behavioral (inattention, distraction, restlessness, outbursts, depression, sleeping problems, memory issues), as well as physical symptoms, such as high or low blood pressure, increased perspiration, and trouble eating or digesting food.

Among adults who have experienced at least one traumatic event in their lives, which the PTSD Alliance estimates 70 percent of adults have, 20 percent will experience PTSD. Half of those individuals will never reach out for help.

For military veterans, the risk increases even more, with 30 percent of those serving in a war zone experiencing PTSD. Since adult ADHD is often missed, undiagnosed or unreported on military entrance exams, service members affected by ADHD may be at even higher risk for PTSD.

When people are exposed to prolonged trauma from events such as child abuse, sexual abuse, violent environments or neglect, they can suffer from symptoms over their lifetimes and experience changes in their brain chemistries as a result of the extreme stress. This is known as complex PTSD, and individuals who experience it can also be affected by anxiety, panic, personality or dissociative disorders, among other conditions.

A comprehensive evaluation is required to diagnose ADHD, and should start with a thorough medical history that includes screening for trauma. The most frequent reasons trauma and its effects are not addressed include healthcare providers overlooking trauma and patients not reporting it, for any number of reasons. Patients might underestimate the impact of the trauma on their lives, they may be reluctant to discuss something that makes them feel uncomfortable or ashamed, or they may be concerned for their safety.

When children are affected by ADHD, screening for trauma involves family members and others who know the child well. If a child is experiencing chronic, abusive trauma and it is happening within the family, it is possible that it wouldn’t be revealed during an evaluation.

While many people diagnosed with ADHD are affected by other conditions, those people affected by both PTSD and ADHD were found to have higher rates of co-occurring conditions, including major depressive disorder, oppositional defiant disorder, social phobias, and generalized anxiety disorder—as well as lower quality of life ratings—than those affected by ADHD alone.

When more than one condition is causing problems for someone, and symptoms can look similar to other conditions, diagnosis becomes far more complex.

Can you have both ADHD and PTSD?

While recent articles have focused on the misdiagnosis of ADHD when PTSD is at play, David Rettew, MD, a child psychiatrist in the psychiatry and pediatrics departments at the University of Vermont College of Medicine, urges parents and healthcare practitioners to take a broad view.

“Kids have only one brain that responds to both genetic and environmental factors,” Dr. Rettew tells  Psychology Today. “Attention and self-regulation begin to be learned early in life. When a negative environment impacts that developmental process, the brain physically changes. There is no evidence that kids who meet criteria for ADHD but have trauma histories have a brain that is any less ‘ADHDish’ than kids with ADHD who come from stable happy households.”

Comprehensive, multi-faceted treatment plans that focus on the ongoing management of a person’s symptoms are most effective for managing symptoms of ADHD and other co-occurring disorders such as PTSD.

Tips for managing PTSD and ADHD

There is help available

ADHD varies in how it can affect you and those symptoms can change over time. It often occurs with other disorders like PTSD, and can be influenced by the co-occurring condition. ADHD evaluations often do not regularly include a trauma evaluation, so if you suspect that you or a loved one may be impacted by PTSD, discuss it with your healthcare provider. If you’re looking for a provider, visit Professionals Who Diagnose and Treat ADHD.

Do you have the experience of co-occurring ADHD and PTSD? What approaches to managing these conditions have been helpful for you?

About ten percent of adults with ADHD also have symptoms of PTSD. Yet many don’t get the help they need to best address both conditions. We take a look at why it can be hard to get an accurate diagnosis and appropriate treatment. Keep reading for what we found.