Are You a Multitasker? 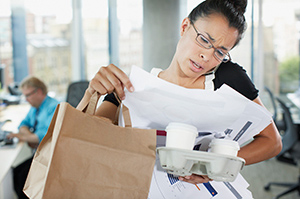 Do you think you’re good at multitasking?

Researchers say humans can’t really “multitask.” Instead, what we are actually doing is “task switching.” We may be making the switch rapidly among several tasks but our brains, even those brains affected by ADHD, can only process one thought or task at a time.

A group of Stanford University researchers decided to look at how well our brains multitask and what the effect of chronic multitasking is on our brains and our lives. They found multitasking actually makes people less effective at their work and impairs their decision-making abilities. On top of that, most multitaskers experienced more stress.

However, there was one group of people in the study who didn’t experience additional stress when multitasking, but nevertheless had significant dips in productivity and decision-making: Adults who displayed ADHD characteristics.

The 1990s and 2000s saw an interest in multitasking–we’d be able to do more, accomplish more, be more productive by simply working on more than one thing at a time. After all, if you can fold laundry and watch TV or read a book while music plays, why not also send emails, skim the daily news, and carry on a conversation? Since then we’ve added more digital media, social media, and electronic devices that let you access your work and personal email from anywhere, at any time. There’s now social media bringing instant messages from friends and celebrities that require attention. Being connected, multitasking, and the appearance of “crazy-busy” all seem to have become popular badges of honor.

Adults affected by ADHD tend to struggle with inattention and seek out novelty. For them, task-switching is natural, as the brain looks for something new or exciting, or at least not what it typically does. For people with ADHD, working on two or three projects at a time seems to make sense. Digital media are always offering something new, and so ADHD brains become accustomed to the jolt of energy from a new post or news article.

Is multitasking efficient for anyone?

The separate study Multitasking in Adults with ADHD put the theory of multitasking to the test. The authors compared task performance, mood, and motivation in 45 men diagnosed with ADHD and 42 men who did not have a diagnosis. Both groups were measured on how well they did with tasks under three different conditions: multitasking, tasks subject to interruption that had to be completed without planning or monitoring, and tasks that were not interrupted. The goal was to create a multitasking situation that included portions of tasks being completed at different times, rather than one task completed all at once.

The results of this study showed that people affected by ADHD were no better or worse at multitasking, as researchers had thought, but they were less likely to be stressed-out by interruption and maintained a more positive outlook about their work, even when interrupted, than those not diagnosed with ADHD.

What multitasking does to the brain

Describing the Stanford study, Travis Bradberry, PhD, noted, “The frequent multitaskers performed worse because they had more trouble organizing their thoughts and filtering out irrelevant information, and they were slower at switching from one task to another.” He went on to say, “Multitasking reduces your efficiency and performance because your brain can only focus on one thing at a time. When you try to do two things at once, your brain lacks the capacity to perform both tasks successfully.”

The Stanford researchers also found the more people are interrupted, especially when novelty was involved, the shorter their attention spans become. A good number of those individuals then become “self interrupters” who begin to create their own interruptions, such as checking social media status updates frequently, and are drawn away from their tasks.

When a person also has ADHD, the tendency towards self-interruption is greater. Frequent self-interruption, in turn, aggravates already existing ADHD symptoms. Researchers also estimate that it took, on average, 23 minutes to completely come back on task after an interruption. Working on multiple projects at once showed that a person’s brain doesn’t completely refocus on the task or multiple tasks when task-switching. This leads to reduced work performance, more errors, and poorer decision-making, the researchers saw.

How to get things done

Marla Cummins is coach and the author of the ebook ADD to Done: Beyond Stuck, Procrastination and Overwhelm.

Ms. Cummins has clients who often claim to be “really good at multitasking,” she writes. “When I hear this from adults with ADHD, they usually mean that they have a lot of energy to keep on going. It usually does not mean working effectively and efficiently."

Ms. Cummins says that because there are so many transitions as you move back and forth between tasks, you may:

What can you do to avoid multitasking and work on one project at a time to be more efficient?  Ms. Cummins suggests:

—Adapted from You Can Complete More without Multitasking

What it is like for you when you are multitasking?

Can you really multitask? Many adults affected by ADHD claim they can, but researchers are not so sure it’s possible. Keep reading for what they discovered, along with suggestions on how to get more done.

Are You a Multitasker?