CBD Oil and ADHD Management: Too Big a Leap 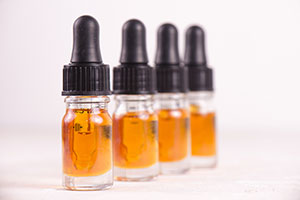 You’ve likely seen the pop-up ads or you’ve heard a friend say something about CBD oil as an alternative treatment for ADHD. In fact, it seems like every online community and social media group has someone praising the compound or offering to sell it. But what is it, and does it really have any proven benefits for managing ADHD symptoms?

Cannabidiol oil, most often referred to as CBD oil, is a product of the marijuana plant. The plant family is called cannabis, and cannabis products can include CBD oil along with smoked, vaped, or eaten products. CBD oil is just of more than 85 compounds in cannabis and is regarded by some enthusiasts as having medicinal benefits.

It is not THC, the compound in cannabis that creates euphoria and delivers the “high” of marijuana use. CBD oil is not supposed to contain any THC, meaning the oil needs to be highly refined to make it suitable for use, and therefore is not a natural product. A reoccurring concern, however, is that some products on the market can have trace amounts of THC present, making them unsuitable for use by children and teens and by any adult concerned about possible addiction.

So what about CBD oil as an alternative approach for ADHD symptom management?

CBD oil, a cannabis product, can be used to treat the symptoms of ADHD, is the claim. There is limited research showing an improvement for some people who have epilepsy and some people who experience anxiety who use CBD oil, so it is thought to also have benefits for people affected by ADHD.

Researching CBD oil specifically for ADHD is relatively new. Some research has been conducted on smoked and ingested marijuana for ADHD, and the findings in general either do not see a benefit or have been inconclusive. For both epilepsy and anxiety, there is more research available that shows some promise; a new medication made from cannabis for seizures caused by Lennox-Gastaut syndrome and Dravet syndrome has been approved by an advisory committee for the FDA, but does not have FDA approval.

Cannabinoids in attention-deficit/hyperactivity disorder: A randomised-controlled trial. This was a very small sample study of 30 people with ADHD who received a trial cannabinoid/CBD medication. The participants were evaluated for symptom levels and IQ performance on standardized tests. There was insignificant improvement on cognitive function and symptom reduction, and nominal improvement on impulsivity and hyperactivity. The researchers expressed concern that the participants did not follow instructions to avoid all other medications or alcohol use that could have affected the study results. The research authors stated that their results were inconclusive.

Impact of ADHD and Cannabis Use on Executive Functioning in Young Adults. This study showed poor cognitive function outcome for young adults who began using cannabis before the age of 16, including young people with an ADHD diagnosis. When evaluated for working memory, verbal memory, decision-making and recall, these young users had poor performance on all points. They made more mistakes when asked to complete questions or tasks. Most concerning, the authors write, “Individuals who initiate use of cannabis before age 16 may be at higher risk for developing persistent neuropsychological deficits because their brain is still developing, especially the prefrontal cortex which is associated with several executive functions including planning, verbal fluency, complex problem-solving, and impulse control, each with its own developmental trajectory.”

Adverse Health Effects of Marijuana Use. A review article for The New England Journal of Medicine by National Institute on Drug Abuse Director Nora D. Volkow, MD, and her colleagues, details the known health effects of marijuana use. THC is a concern, as are other components of the plant, for health. Adverse effects include decreased cognitive abilities and exacerbated co-occurring mental health disorders and substance abuse. Dr. Volkow lists several health conditions that might be able to be treated by cannabis products, including chronic pain and inflammation, multiple sclerosis, and epilepsy. She does not include ADHD as a health concern that can be treated by cannabis products. In fact, she writes, “[H]eavy use of marijuana results in impairments in memory and attention that persist and worsen with increasing years of regular use.”

Thoughts from an expert on substance use and ADHD

John Mitchell, PhD, has heard all about ADHD and cannabis product use. He is a researcher and assistant professor at the Duke ADHD Program. He says he’s not surprised by the current interest in CBD oil for ADHD symptoms and is not impressed by arguments in favor of it.

“There is some efficacy in childhood epilepsy,” he points out, “but when you look at the literature for anything else, especially psychiatric disorders, there’s not strong support to say, yes this should be a go-to treatment, especially for ADHD.”

He says the interest stems from people’s desire to have more choices in treating medical conditions and in the changing perceptions on marijuana use. He points to several states that have made medical marijuana legal and a few states that are considering legalizing recreational marijuana use.

“This interest in CBD is coming out more broadly in these perceptions of lack of harmfulness and the changing perceptions of marijuana use in general,” Dr. Mitchell says. “For a lot of different disorders—PTSD, ASD, some addictions—[some members of the public are] interested because it might have therapeutic effects when you isolate the CBD. But those studies are preliminary. When you look at the published literature on CBD there’s nothing—it’s limited to one study.”

He reminds anyone interested in CBD oil or cannabis products that there have not been the studies showing effectiveness or safety for these products when it comes to ADHD management.

“When parents or adults look into CBD oil for someone with ADHD, it’s not just that there’s a lack of evidence out there right now,” he says. “There’s been no treatment studies. There’s no randomized trials that show it works. And there’s other treatment options available for kids and adults with ADHD. These are unregulated products. If these are not well-regulated products, how do we know that we’re really getting what’s being advertised?”

What about the question of CBD oil being a more natural option than a medication? It comes from a plant, after all.

“Natural doesn’t necessary means it’s less harmful,” says Dr. Mitchell. “If I were a parent, I would want it to be pure. Which means it’s actually less natural, because it has to be refined.”

Other considerations, he says, include how well-refined a CBD oil might be—are the THC and other potentially harmful components fully removed—and the fact that there are no longer-term studies on CBD oil use for children or adults. He adds that there are well-researched and effective non-medication treatment options, such as parent training and lifestyle adjustments, that are shown to be effective in managing ADHD symptoms.

There is also the question of CBD oil becoming a “gateway” to marijuana use by a young person. Dr. Mitchell says a young adult who took CBD oil as a child might not see the difference between it and marijuana use for symptoms management. Marijuana use has well-researched negative effects on physical and mental health and can make ADHD symptoms worse, he says.

“The literature shows there are harmful effects,” Dr. Mitchell says. “There are impacts on cognitive ability, motivation. Especially for those who are younger and smoking more, there is an impact on IQ.”

The research on CBD oil and other cannabis products as a possible intervention for ADHD does not show effectiveness for managing symptoms, and actually shows increased mental and physical health risks. There haven’t been any studies on the use of CBD oil in children; neither have there been studies on long-term effects. So while some people are using it and have shared their results publically, researchers and medical professionals have not found evidence that it is an effective treatment for ADHD. The research does not show that CBD oil works for ADHD management.

“We don’t want to misrepresent things, and with CBD oil, it is getting misrepresented,” Dr. Mitchell says. “When people say this works for ADHD, this is going way beyond the data. That’s too big of a leap.”

Join the discussion: What do you think about CBD oil as an intervention for a variety of conditions?

CBD Oil and ADHD Management: Too Big a Leap