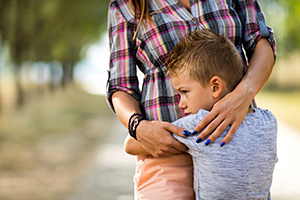 From natural disasters to human assaults, to protracted traumas such as war and violent neighborhoods, the psychological impact of adverse events to survivors can be serious and often lasting. This is post-traumatic stress disorder (PTSD)―an anxiety disorder characterized by intense, disturbing thoughts and feelings, flashbacks or nightmares; depression, fear or anger; or detachment from other people.

Children are more affected by trauma than adults and the younger the child, the greater the impact.

“Psychological trauma can have detrimental effects on brain function that are not only lasting but that may alter patterns of subsequent neurodevelopment, particularly in children,” say researchers Deborah A. Weber Loftis, PhD, and Cecil R. Reynolds, PhD, of the Department of Educational Psychology at Texas A&M University.

There has been a great deal of research linking PTSD and ADHD.

Diagnosis and treatment can be challenged when considering symptoms common to PTSD and ADHD:

The ability of children to effectively cope with traumatic events and conditions depends not only on their specific coping behaviors but also on factors in the support environment.

Coping behaviors can be either avoidant (anger, social withdrawal, blame) or active (cognitive restricting, which means to find a positive or realistic way to think about a bad situation). Variations on these coping styles can include overtly expressing feelings, wishful thinking, distractions, acceptance/resignation, seeking social support, and emotional numbing.

The American Red Cross and FEMA recommend returning to familiar routines as soon as possible to reduce the likelihood or severity of PTSD symptoms.

The degree to which community supports exist to provide shelter, food, clothing and other services were also found to alleviate PTSD symptoms in both children and adults. The need for such support is even more important for low-income residents, who were found to experience the most severe symptoms.

Children and adolescent survivors of major disasters who receive psychological intervention experience reduced or less severe symptoms of trauma than those who lack such care.

However, there has not been conclusive research that quantifies the degree to which contingent factors such as treatment modality (group vs. individual), providers’ training, timing of intervention, etc., affect outcomes. All the dependent variables such as the type of disaster or adverse event, degree of exposure to the event, duration of the event, demographic and cultural attributes, sequencing of intervention components, therapeutic approach, etc., have not been examined in a rigorous analysis.

What you can do:

Has your family experienced a traumatic event? How have you helped your children to weather the storm?

Children who survived Hurricane Katrina are showing the effects of trauma years later. The impact of traumatic events can persist long after the initial life-threatening danger―loss of home, possessions, food, neighborhood, school, friends, sometimes family―all of which continue as reminders of the original danger. How does trauma impact mental health―particularly in cases of ADHD, and what are ways to cope?

ADHD and Migraines are Likely Partners

Resources for Helping Your Family Cope with an Emergency