Disruptive Behavior in Children with ADHD 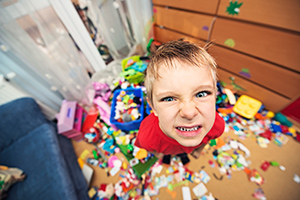 If your child with ADHD has become more angry or aggressive, or refuses to comply with rules and requests, you may be concerned. These behaviors may signal the emergence of a Disruptive Behavior Disorder (DBD) such as Oppositional Defiant Disorder (ODD) or Conduct Disorder (CD), which have high rates of co-occurrence with ADHD: From 45 percent to 84 percent of children with ADHD will meet full diagnostic criteria for ODD with or without CD. In studies of clinically referred adults with ADHD, 43 percent had a lifetime history of ODD.

Because longitudinal studies have shown that DBD can lead to substance abuse or criminality, it is important to intervene early, before negative behaviors and attitudes―your child’s as well as yours and your family’s toward him or her―become firmly entrenched. The family tensions caused by a child’s disruptive behavior can create an escalating dynamic of negative behaviors; research has shown a strong link between maladaptive parenting and DBD.

A recent evidence-based review of treatment approaches for children with DBD conducted by researchers Jennifer Kaminski and Angelika Claussen of the Centers for Disease Control (CDC) identified six treatment method types for DBD, which in practice have been delivered under various conditions and combinations (“treatment families”). The review then ranks these treatment families into five levels of effectiveness, using a rigorous model for assessing evidence.

The results of this review can help you and your doctor find appropriate treatment, because it identifies the types of treatment―and their characteristics―that are most effective, rather than focusing on name-brands that may not be found in your location.

According to the Diagnostic and Statistical Manual of Mental Disorders, Fifth Edition (DSM-5), children with ODD show a pattern of developmentally inappropriate, negative, aggressive, and defiant behavior. The signs of ODD include both emotional and behavioral symptoms that persist for six months or longer:

Data from a 2007-2008 National Study of Children’s Health found the prevalence of DBD to be:

Those figures do not include undiagnosed cases.

The most recent National Survey of Children’s Health data from 2016 have recently been publicly released, with publications from CDC and Health Resources and Services Administration expected soon, documenting the prevalence of behavioral disorders co-occurring with ADHD.

Types of treatment for disruptive behaviors

The six types of treatment approaches identified in the review, which can be conducted in different settings or conditions, are:

We interviewed Steve Lee, PhD, a professor in UCLA’s Department of Psychology, who participated with Dr. Kaminski in a webinar on DBD. Dr. Lee is a member of CHADD’s Professional Advisory Board with expertise in ADHD. Dr. Lee noted that the behavioral symptom link between ADHD and DBD lies in the lack of self-regulation, which in ADHD results from impaired executive function and in DBD enables disruptive behaviors. He concurred with Dr. Kaminski on the critical importance of acting early to get a professional diagnosis when symptoms of DBD appear and persist for six months or more. He emphasized the risk of maladaptive family dynamics developing if not addressed early, and that once those dynamics take hold, they tend to cascade or snowball. It is then harder and takes longer for therapy to reverse those behaviors.

The combination of ADHD co-occurring with DBD presents challenges for clinicians, both in diagnosis as well as in treatment. Dr. Lee notes that it’s a non-additive combination: A child who is distractible and disorganized has more difficulty learning new habits. He also notes another challenge: “Hostile attribution biases,” which develop from early experiences of maltreatment or victimization. Such bias causes the child to assume negative intentions in others’ actions, which then prompts aggressive reactions in the child.

The types of therapy addressed in the CDC review are critical for successfully treating disruptive behaviors. But Dr. Lee cautions, “It will get worse during therapy before it gets better.” That’s because your child won’t know how to deal with the new conditions in the family, even though those conditions are more positive. Your child has developed his behaviors, reactions and interactions within the context of prior family and parenting dynamics, and will not be able to immediately adjust to the new reality of positive parenting. He may “test” you, trying to recreate the prior conditions in which he understood what to expect. He’ll need time to develop trust in the “new normal,” to learn new ways of behaving, and to develop new expectations and understandings of others.

“Don’t pull out of therapy. If you stop therapy too early,” Dr. Lee said, “you will communicate to your child that he isn’t worth the effort, that he is a hopeless case.”

More help for you:

The review by Dr. Kaminski and Dr. Claussen focused on children. For a review of evidence-based treatment for adolescent DBD, see Evidence-Based Psychosocial Treatments for Adolescents With Disruptive Behavior.

How have you been able to help your child who is struggling with behavioral issues?

Your child can sometimes be difficult, particularly when the impulsivity of his ADHD takes over. But lately he has been out of control—angry, irritable, argumentative, defiant. What’s going on, and what can you do about it?

Disruptive Behavior in Children with ADHD

Could White Noise Help You Stay On Task?