Girls Need Support When It Comes To ADHD 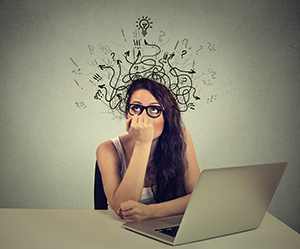 Today is International Women’s Day. On this day, we collectively celebrate women’s progress and take stock of the barriers that limit the opportunities of women and girls worldwide. Many girls and young women affected by ADHD struggle to receive the treatment and academic and social support they need to be successful in life.

ADHD was considered mostly a boy’s problem, or at least diagnosed a lot more often in boys than in girls, until a little more than 20 years ago. Today, about 6.4 percent of girls have received a diagnosis of ADHD at some point, compared to 14.2 percent of boys, according to the National Center for Health Statistics. However, combined there is a prevalence rate of 7.2 percent for all children.

So what’s going on? Are girls less likely to have ADHD? The answer is no, girls are just less likely to be noticed because their symptoms don’t appear the way many parents and professionals expect.

Girls are more likely to have the predominately inattentive type of ADHD, which includes difficulty concentrating, disorganization, problems following instructions, forgetting or losing things, and being easily distracted. Girls seem quieter and more flighty than their peers—behaviors that are often expected in all girls. Boys, on the other hand, tend to have more outwardly noticeable hyperactivity symptoms, such as fidgeting, difficulty remaining seated, blurting out answers, not taking turns, and running around excessively.  Hyperactivity may get them into trouble at school for bothering classmates or causing problems in class. These problems often get the boys noticed sooner and referred for diagnosis for ADHD.

Young girls, in contrast, may be overlooked because their symptoms generally only affect themselves and don’t get in the way of other children’s learning. Girls may silently end up with poor grades, have fewer friends, and experience depression related to their ADHD symptoms.

“Although boys and girls with ADHD experienced difficulties in all areas, girls with ADHD, especially the inattentive subtype, were more negatively affected in academics and peer relationships,” according to a study in the Journal of Clinical Child Adolescent & Psychology. “Inattentive girls were less popular and more likely to be bullied than girls without ADHD, whereas inattentive boys were not. The social isolation experienced by many girls with ADHD deserves greater attention.”

“Girls are not as hyperactive,” Dr. Patricia Quinn, director and co-founder of the National Center for Girls and Women with ADHD tells Child Mind Institute. “People imagine little boys bouncing off the walls and think: That’s what ADHD looks like and if this girl doesn’t look like that then she doesn’t have ADHD.”

“Girls with ADHD do a lot of hiding because they try very hard to put up this facade of competence,” Kathleen Nadeau, PhD, adds. She is the director of the Chesapeake Center for ADHD in Maryland. “But what’s behind that facade is, ‘Yes, I got a good grade on this paper but I’ve been up for two days and I’m so stressed out I’m about to lose my mind.’ ”

Girls affected by ADHD, and often co-occurring conditions, tend to be more at risk than their peers for self-injury and suicide as they enter early adulthood, according to Stephen P. Hinshaw, PhD, professor of Psychology at the University of California, Berkeley. Dr. Hinshaw and his colleagues conducted a study of girls with ADHD, spanning 10 years.

“As girls with ADHD grow older, they show fewer visible symptoms of the disorder but continue to suffer in hidden ways,” Dr. Hinshaw writes in the study. “The findings challenge assumptions that girls can ‘outgrow’ ADHD and underscore the need for long-term monitoring and treatment of the disorder.”

How can you help the girls in your life who have ADHD not fall between the cracks? One way is to recognize how the symptoms of ADHD may show up in girls when hyperactivity isn’t in the equation.

Predominantly inattentive ADHD symptoms to watch out for include:

For many girls and young women who experience these symptoms, the disorder still goes unrecognized even when there is more information than ever before on ADHD available.

A study in Child: Care, Health and Development describes teachers who were presented with descriptions of girls with ADHD who recognized the presence of a problem, but did not identify it as ADHD.

“Teachers are able to recognize ADHD-related behaviors and impairments but conceptualized these as reflecting attentional or emotional difficulties rather than as relating to a disorder (ADHD),” the study authors write. “Improving teachers’ knowledge about ADHD, especially the inattentive subtype, could assist in tackling gender-related barriers to care.”

If you suspect that your daughter has ADHD, talk with her pediatrician and ask for a referral to a specialist in ADHD diagnosis and treatment. It can make a difference in her quality of life and her opportunities to succeed.

Do you or your daughter have ADHD? Share your experiences with our community.

ADHD symptoms get in the way for many girls who don’t have a diagnosis, often because the inattentive symptoms don’t “look like ADHD.” Many people still think of ADHD as a condition that affects boys–and yet almost 7 percent of girls cope with the disorder.

Girls Need Support When It Comes To ADHD

Navigating Marriage or Co-Parenting When There is ADHD