Gluten-free for ADHD? Check the Research 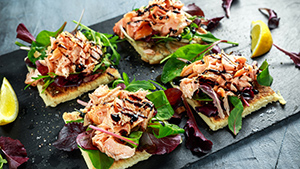 It can sometimes seem like everyone is suggesting a gluten-free diet as treatment or cure for a range of ailments. In fact, the gluten-free market of foods and self-care items in the United States generates more than $1.77 billion a year and is projected to grow rapidly.

There are frequently articles or blogs suggesting a gluten-free diet can help alleviate the symptoms of ADHD, with some people arguing a gluten-free diet might even “cure” ADHD. There are some bloggers who have described their children’s ADHD symptoms as having improved or having been eliminated entirely when their families  adopted a “gluten-free lifestyle.”

This may have left you wondering if cutting out this protein found in wheat products could help your child. We decided to take a look at the research surrounding gluten and ADHD to find out.

Gluten is a protein found in wheat, rye, and barley. Gluten helps to give elasticity to dough and enables breads to be soft and puffy. It is also used in seitan, which is prepared wheat gluten used in meatless food products. Gluten can be used as an ingredient in other foods, including prepared foods such as soups, sauces, salad dressings, and cereals.

As long as humans have been eating wheat, they have been consuming gluten. However, several authors and researchers have argued that as wheat has changed through selective breeding to improve crop production, so has the gluten it contains. This newer form of gluten, they say, has contributed to an increase in health problems for some people. This remains debatable and is currently under research.

The Celiac Disease Foundation estimates that 1 in 10 people have celiac disease. Gluten triggers their immune systems to attack their small intestines, causing damage to the body and preventing it from properly absorbing nutrients from the foods they eat. This leads to abdominal pain, gastro-intestinal symptoms, and malnutrition. Celiac is a hereditary condition and not one that develops later on in life. The only effective treatment is to completely forgo gluten in any form and in any food product.

Many people with celiac also describe difficulties with attention, memory, and behavioral issues. ADHD is often a co-occurring condition to celiac disease.

Some people who do not have celiac disease do experience a non-celiac-gluten sensitivity. Research shows wheat exposure is triggering an immune reaction and cellular damage in their intestines. They will experience many of the same symptoms of celiac but do not test positive for celiac disease. They find their symptoms will disappear when gluten-containing foods are eliminated from their diets. A small group of people experiencing symptoms that resemble ADHD, but who do not have ADHD, will also see an improvement in those symptoms.

Some parents of children with ADHD, when looking at research on celiac disease, may think that by eliminating gluten from their children’s diets the ADHD symptoms will also decrease or the disorder will disappear completely. This assumes that all ADHD symptoms are related to the symptoms of non-celiac-gluten sensitivity.

Researchers who have examined the relationship between ADHD and celiac have not found that ADHD is caused by celiac disease, even though ADHD can be a co-occurring condition to celiac.

“There is no conclusive evidence for a relationship between ADHD and celiac disease,” write researchers in the study Association of ADHD and Celiac Disease: What Is the Evidence? A Systematic Review of the Literature. “Therefore, it is not advised to perform routine screening of celiac disease when assessing ADHD (and vice versa) or to implement gluten-free diet as a standard treatment in ADHD.”

If a person has inattentive and behavioral issues related to celiac disease, those symptoms can improve when celiac is treated, regardless of an ADHD diagnosis. Here are some research findings:

Elimination diets’ efficacy and mechanisms in attention deficit hyperactivity disorder and autism spectrum disorder.  Various diets eliminating gluten and dairy proteins where examined for their impact on neurodevelopmental disorders, including ADHD. Researchers looked specifically at the microbiome-gut-brain axis since it is often cited as the mechanism by which gluten is thought to cause ADHD symptoms. Research shows only a small group of children respond to elimination diets, and most specifically diets that avoid artificial colors or preservatives. Research on eliminating wheat products hasn’t shown an improvement in ADHD symptoms but there continues to be a need for further exploration of this research.

Truths, Myths and Needs of Special Diets: Attention-Deficit/Hyperactivity Disorder, Autism, Non-Celiac Gluten Sensitivity, and Vegetarianism. Researchers found supplementation with omega-3 might be helpful, along with avoiding artificial colors and preservatives to improve ADHD. A gluten-free diet should be used only if there is an allergy or sensitivity to gluten, not as treatment for ADHD symptoms.

Gluten Free Diet For Children With Attention Deficit And Hyperactivity Disorder. After six months of dietary intervention, a small group of children with ADHD on a gluten-free diet showed a statistically significant decrease in hyperactivity symptoms that was sustained while on the diet. However, other symptoms of ADHD, including attention, where not evaluated.

Could a gluten-free diet help to decrease your child’s ADHD symptoms, specifically if your child does not have celiac disease or non-celiac-gluten sensitivity? Some things to consider:

"With primary ADHD, however, diet changes don’t make a dramatic difference," Jay Salpekar, MD, the director of the Neurobehavior Program at Children’s National Medical Center in Washington, DC, tells Parents Magazine. "A healthy diet will improve a child’s energy level and feeling of well-being, but it probably won’t make him less hyperactive or more attentive if he truly has ADHD."

Given the few benefits shown for children with a diagnosis of ADHD without celiac disease, and there is no evidence that celiac or non-celiac-gluten sensitivity is a cause of ADHD, eliminating gluten is likely not helpful for reducing or eliminating ADHD symptoms and research evidence doesn’t suggest it as a complementary approach.

You can learn more about celiac disease or non-celiac-gluten sensitivity from the Celiac Disease Foundation. You can find more research on this topic and other topics related to ADHD in our ADHD Research Library. Learn more about CHADD’s Levels of Evidence for ADHD Interventions.

What has your family’s experience with elimination diets been? Have they been helpful for you?

Have you thought about a gluten-free diet as one of the possible tools to decrease ADHD symptoms? We look at the research behind this popular theory to learn if it could be helpful for your family. Keep reading for what we found out

Thinking About Parenthood? Consider This

Gluten-free for ADHD? Check the Research