How One School Improved Children’s Behavior Through Mindfulness 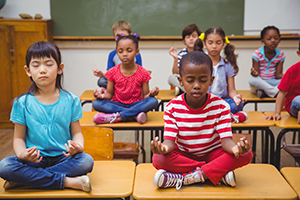 A group of schools in Baltimore, Maryland, is finding out. Working with Holistic Life Foundation, Inc., these schools have created Mindful Moment Rooms in elementary and high schools as a refuge for students in distress or acting out in class.

Mindfulness is “often described as living with full awareness of our moment-to-moment experience, without excessive judgment and bias,” writes Mark Bertin, MD, in Attention magazine’s Mindfulness and Managing ADHD. “It comprises a skill set that helps us focus on life as it happens, instead of becoming lost in distracting fantasies of the future, rumination about the past, or emotional reactions that clutter our minds. This skill can be developed through a type of meditation that is about little more than focused attention. The art of mindfulness is noticing our mind wandering, and guiding it back to real life and to a sense of balance, without giving ourselves a hard time for having wandered off in the first place. We train ourselves to focus our attention where we want, away from mental distraction and onto the situation at hand.”

By practicing mindfulness and learning to focus your attention, Dr. Bertin writes, you can begin to decrease the ADHD symptoms of inattention and impulsivity, along with becoming better able to recognize and filter out distractions in the your environment. Many people are incorporating mindfulness practices into their ADHD treatment plans.

For Baltimore City students, becoming more mindful has been a step toward making better choices in behavior and academic preparation. Several of the participating schools have seen a decrease in behavioral referrals and detention.

Carlillian Thompson, principal of Robert W. Coleman Elementary School, credits Holistic Life Foundation for these improvements at her school. The school day begins with a Mindful Moment—15 minutes of breath work and meditation that students participate in while still in their classrooms.

“They actually taught the students how to redirect that negative energy into something positive,” Ms. Thompson says during an interview with CBS This Morning. “We’ve had zero suspensions.”

Holistic Life Foundation co-founder and marketing director Andres Gonzalez said he was a little surprised to read some media reports claiming mindfulness practice had replaced detention at the schools. He says that detention remains an option for misbehavior, but more often students are referred to the Mindful Moment Room when they are in a confrontation.

“One thing I always remind people is that the room hasn’t replaced detention, it’s more that in the Mindful Moment Room, we’re giving them tools to better manage themselves,” Mr. Gonzalez says. “Oftentimes when a child—say he gets into a fight in the classroom—he’s in a heighten state, yelling or crying. You’ve sent a student to the office, now he knows he’s in trouble. Not only is he in trouble at school, he’s in trouble at home. It increases the scenario to say, ‘You have to go home and now you can’t come back to school.’ He doesn’t have any tools to regulate himself, and the cycle continues.”

The Mindful Moment Room and mindfulness practices help to break that cycle, Mr. Gonzalez says, helping a student to work himself out of trouble and back into class.

“Instead he comes to the Mindful Moment Room and learns the tools, and we do active listening,” Mr. Gonzalez says. “We give him tools and techniques (to calm himself); we do a meditation. He’s not in the fight-or-flight state anymore; he’s in a relaxed state. He can learn to calm down and be able to return to class. Now you’re giving him tools and techniques to manage and regulate the scenario. I’m not saying that it works 100 percent of time, that (students) don’t come back, but after two or three times, they do learn how to do it.”

Many children participating in the program are affected by ADHD or symptoms of inattention and distractibility or impulsivity related to other conditions. Other students are coping with difficult home lives or have witnessed violence in their neighborhoods. Mr. Gonzalez points out that trauma—both major events as well as repeated smaller events—is known to affect a child’s neurological development. This neurological impact affects attention, impulsivity, and emotional regulation.

“When you’re faced with trauma, it impacts that prefrontal cortex with all the executive functions,” Mr. Gonzalez says. The inner city of Baltimore has seen more than its share of continuing, ongoing trauma, which has affected children in a significant way. “We don’t know what this kid has gone through. The neurons in his brain aren’t firing correctly. This kid isn’t able to make a good decision. Learning these mindfulness practices helps him to make better decisions.”

Mr. Gonzalez says he has seen improvements in the students who participate. Many are better able to think through possible actions in tense situations, he says. Others have used the mindfulness techniques to calm their sense of anxiety before a test or a stressful classroom situation.

“They’re like, ‘I’m in control,’” he says. “And kids like to be in control. They can regulate themselves. It empowers them, and they can be more compassionate individuals. I’ve had kids say to me, ‘Hey, I used this (technique) before I took a test to calm me down’ or ‘I used this and I would have gotten into a fight today and I didn’t.’ I think they understand we’re also about love and community and working together.”

The benefits of mindfulness practice and the work of Holistic Life Foundation extend beyond the elementary or high school programs, Mr. Gonzalez says. Students who have graduated and gone on to college or entered the workforce have come back to him and his colleagues to thank them for teaching mindfulness techniques.

“They say, ‘I see how I was being a (jerk). I used the techniques you taught me, and they made me respond to a situation rather than react to it,’” he says. “I think the main thing they say is, ‘It helps me to relax; I’m not as impulsive. I can deal with conflicts in a more peaceful manner.’ I think they see the transformation but it takes a little while.”

Mr. Gonzalez says Holistic Life Foundation is hoping to expand its program, not just in Baltimore City but nationally and internationally. The foundation has been approached by schools and local programs from across the country and plans to train mindfulness practitioners who can teach these techniques in their own communities. The program’s heart, though, remains in the founders’ hometown of Baltimore.

The foundation is hoping to implement its mindfulness program and open Mindful Moment Rooms in 10 to 15 additional Baltimore City schools, Mr. Gonzalez says. The foundation also has adult programs in the community, along with programs in retirement communities, nursing homes, and addiction recovery centers.

Students who are struggling with attention issues and traumatic or stressful home lives find that learning mindfulness techniques is beneficial, Mr. Gonzalez says.

“The thing they learn is, not only is it there when they come to the Mindful Moment Room, they are able to access that place of peace amid chaos wherever they are,” he says. “To use their breath and remove the distractions, remove those things that are their stressors. When they become more mindful of themselves, that’s where they become more successful. They can always find that sense of peace no matter what is going on.”

Tell us what you think about mindfulness practices and ADHD. Comment on this article.

How One School Improved Children’s Behavior Through Mindfulness

Figuring Out What Students with ADHD & Dyslexia Need