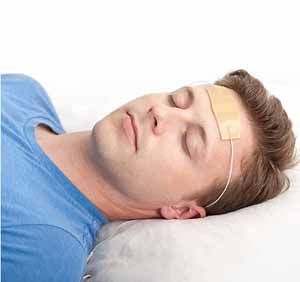 Can ADHD symptoms be treated by stimulating the brain while someone sleeps? A new device recently approved by the US Food and Drug Administration offers that possibility, seeming to provide symptom reduction on par with nonstimulant medication management.

The device uses trigeminal nerve stimulation (TNS) stimulation. This is a promising new practice that sends a very low electrical pulse through a nerve just under the skin on one’s face. The pulse stimulates nerves in the brain stem. These nerves in turn affect various parts of the brain. The practice is already being used to address depression and anxiety symptoms.

CHADD’s resident expert, L. Eugene Arnold, MD, MEd, says the recent excitement for the eTNS product approved by the FDA might be too early, as there are still several unknowns about the treatment over the long run.

“I would call it encouraging, though,” Dr. Arnold says. “And welcome, assuming it holds up to further study.”

The recently approved product is the Monarch external Trigeminal Nerve
Stimulation (eTNS) System. Developed by NeuroSigma, it includes a small device about the size of a pack of cards connected to a headset. The ends of the headset have a strip with electrodes that sticks to the child’s forehead while she sleeps. During the night, the device sends low-level electrical stimulation to the trigeminal nerve, located just below the skin on the child’s forehead. The child may feel tingling where the device is attached. In studies, this feeling was not enough to keep the child awake.

Monarch claims neuroimaging studies show the eTNS increases blood flow in the brain regions that are related to regulating attention, emotion, and behavior. ADHD is characterized by difficulties in regulating attention and emotions, and often includes behavioral issues for children. The device is currently recommended for mild to moderate ADHD symptoms. Some children in the recent study experienced drowsiness, an increase in appetite, trouble sleeping, teeth clenching, headache, and fatigue. No serious side effects were noted, according to NeuroSigma.

“This new device offers a safe, non-drug option for treatment of ADHD in pediatric patients through the use of mild nerve stimulation, a first of its kind,” says Carlos Peña, PhD, director of the Division of Neurological and Physical Medicine Devices in the FDA’s Center for Devices and Radiological Health. He says approval reflects the FDA’s “deep commitment to working with device manufacturers to advance the development of pediatric medical devices so that children have access to innovative, safe, and effective medical devices that meet their unique needs.”

Questions on costs could play a role

Dr. Arnold says developing effective treatment options for ADHD is important. Not all treatment options—stimulant and nonstimulant medications, behavioral treatment, neurofeedback, dietary changes—are effective for every person. Having some choices that best meet an individual person’s needs is vital in designing a treatment plan.

The study results for the eTNS product resemble nonstimulant medication treatment, Dr. Arnold says. The product currently costs about $1,000, which likely won’t be covered by most insurance plans right now.

“Affordability will determine how much of a role it plays in treating ADHD,” he says. “If families have to buy the machine, and the insurance does not cover it, then it’s going to be a larger out-of-pocket cost than medication. If it’s a substitute for ongoing medication, it might be cheaper for the insurance company to pay for the machine.”

Other considerations will arise if the device is prescribed along with a medication. Dr. Arnold says it’s common for two ADHD medications to be prescribed together for improved effectiveness. He does not know if insurance companies would cover costs for both the device and medication.

ADHD is treated, generally, through a combination of medication management, behavioral management, educational accommodations, and education for the child and family about how ADHD may affect a person. Most families will include some complementary approach to support treatment, such as diet or supplements.

“A lot of it [which interventions to select] will have to do with family preference,” Dr. Arnold says. “Some families will do anything to avoid medications for their child. So, they’ll likely consider this very early in the game for their child, along with behavioral treatment.”

Other families may consider trying the eTNS after disappointing results with medications, or if there is a reason to be caution about combining medications for coexisting conditions. In any situation, Dr. Arnold says families should know that researchers are still learning if booster sessions will be needed to maintain results. How often and how many sessions are needed still needs to be determined from experience using the device.

“There’s nothing wrong with having another tool,” he says. “The more options we have the more likely that any given individual will find something that works for them. I wouldn’t discourage people from trying but I wouldn’t advocate it. I would advocate for people participating in studies to learn more about it.”

The development of the eTNS, and other TNS devices, is part of the growth of transcranial magnetic stimulation to treat brain-based health conditions. This includes depression, anxiety, some forms of obsessive-compulsive disorder, and other conditions. The device works by using magnetic waves to send very-low pulses of electricity to the brain. The pulse encourages certain parts of the brain to improve in function. Patients remain awake, comfortable, and do not require sedation during treatments. Very few side effects have been noted.

Dr. Arnold said it’s not surprising that researchers would include ADHD when studying which conditions could respond to this new treatment. It’s noninvasive, meaning there are no cuts made to the body and nothing inserted into the person for the treatment to be effective.

“It appears that it’s becoming mainstream treatment in many areas,” he says. “We’re going in that direction.”

Dr. Arnold compared many of the emerging medical devices and treatments to the popular TV show franchise Star Trek. Set in the distant future, medicine has advanced to the point where practitioners can heal a person of serious conditions in a matter of moments. With recent advancements, Dr. Arnold says we are approaching a time when physical and mental health conditions may be treated in a similar way.

“We’re coming to the place where you see on Star Trek a doctor holding up a device. It diagnoses and treats a problem in one go,” he say. “We’re going there, it’s coming.”

And that, he says, is something to be excited about.

Join the discussion: Would you be interested in eTNS as an intervention for ADHD symptoms?

Webinar: When A Preschooler Has ADHD