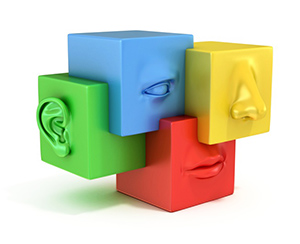 There are millions of children and adults whose lives are disrupted by dysfunctional over- and, in some cases, under-stimulation from their own senses. Variously termed sensory processing disorder, dysfunction, deficits, or sensory modulation disorder, it’s estimated to occur in 5-16 percent of people.

There has been controversy over whether this dysfunction is a diagnosable disorder. Although the Interdisciplinary Council on Developmental and Learning Disorders Task Force included sensory processing disorder in its Diagnostic Classification of Mental Health and Developmental Disorders of Infancy and Early Childhood, it has not yet been recognized as a mental disorder in the Diagnostic and Statistical Manual of Mental Disorders, Fifth Edition (DSM-5) or International Classification of Diseases, Tenth Edition (ICD-10) medical manuals.

In 2012, the American Academy of Pediatrics issued a policy statement recommending pediatricians not use sensory processing disorder as an independent diagnosis, instead advising clinicians to consider other developmental disorders such as autism spectrum disorders (ASD), ADHD, or anxiety disorder.

Indeed, some of the symptoms of sensory processing dysfunction are shared by some of the symptoms of ADHD and/or ASD, and have been addressed in many studies within the framework of each condition. The DSM-5 now includes hyper- or hyporeactivity to sensory input or unusual interest in sensory aspects of the environment in its revised ASD criteria; and it is noteworthy that among children with ADHD, various studies have found 46-69 percent to show symptoms of sensory over-responsivity. Sensory processing dysfunction has not been described by the DSM-5 as a seperate disorder.

The first study identified abnormal white matter microstructure in the brains of children with sensory processing dysfunction by applying diffusion tensor imaging (DTI) to a small group of 16 boys. This was the first study to find that boys affected with SPD have quantifiable regional differences in brain structure when compared to typically developing boys. This work showed a biological basis for the disease but prompted the question of how these differences compared with other neurodevelopmental disorders and how it would appear in girls.

The second and third studies worked to address those questions.

The second study focused on identifying white matter differences in specific brain regions of a larger sample of 40 children affected by SPD and 41 children without SPD, both boys and girls, first screening out children with ASD using the Social Communication Questionnaire. DTI results showed decreased volumes and structural malformation of white matter in those regions among children with SPD.

But those phenomena appeared in degrees, operating as a “continuum, with the children with SPD at one extreme and sensory-typical at the other,” says senior researcher Pratik Mukherjee MD, PhD. “This builds on the idea that SPD is a spectrum disorder and for the first time we have direct measurements, rather than solely relying on parent reports.”

The third UCSF study attempted to characterize and enhance attentional abilities in children with sensory processing dysfunction, by:

The researchers first evaluated attentional abilities of children (girls) ages 9-10 with and without SPD by direct measurements of behavioral (using three computerized tasks) and neural function (midline frontal theta power, an EEG marker of attentional abilities), along with parental reports of inattention. The Vanderbilt ADHD scales were then administered to the SPD subjects; 54 percent exceeded the cut score for inattention or hyperactivity, yielding three test groups including the non-SPD control group. Within the SPD+Inattention group, reduced activity in midline frontal theta was observed. The study does not propose sensory processing dysfunction as a separate condition.

In this third UCSF study, the children were then instructed to play a uniquely designed video game 25 minutes a day for four weeks. After playing the video game for four weeks, the group of children with SPD and ADHD symptoms showed improvements in attention, to the extent that seven of them no longer met research criteria for ADHD. More importantly, parent-reported improvements were noted nine months after the intervention.

The game uses a digital platform based on neuroscience designed to strengthen the brain’s ability to process and prioritize thoughts and external stimuli. It was originally developed in the lab of Adam Gazzaley, MD, PhD, in UCSF’s Center for Integrative Neuroscience. (Dr. Gazzaley was a keynote speaker at the 2018 Annual International Conference on ADHD.)

What it means for children with SPD

The first UCSF study showed a biological basis for SPD in boys and the second study decoupled it from ASD and extended the neurological assessment to both genders. The third study showed the relationship between SPD and ADHD in girls and also tested the effectiveness of a video game on attention.

The findings of the third study suggest a subset of the SPD population may face greater cognitive control deficiencies compared to typically developed persons, which is meaningful because cognitive control abilities―specifically attention―have been shown to affect sensory processing abilities. The variability of attentive behaviors in the third study’s SPD group suggests there is a subset of children with SPD who are less affected by attention deficits but still equally impeded by sensory dysfunction. And finally, there is a segment of the SPD population not affected by ADHD symptomology, suggesting SPD and ADHD are not synonymous conditions and these challenges must be assessed and considered independently in each person.

The findings from the intervention in the third study suggest that “one size doesn’t fit all, as there were selective benefits of this intervention for some of these children compared to their counterparts without attentional deficiencies,” says lead author Joaquin A. Anguera, PhD, director of the clinical program in the Neuroscape Center and assistant professor in the UCSF departments of neurology and psychiatry.

Although these studies represent breakthrough advances, they do not provide conclusive understanding of sensory processing dysfunction and its relationship to other neurodevelopmental disorders. The UCSF Sensory Processing Group intends to conduct additional research to:

Join the conversation: Do you or your child display signs of sensory processing dysfunction? What do you think of current research?

Using Mindfulness When Parenting a Child with ADHD