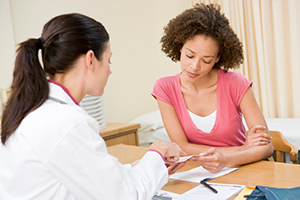 A study recently released in the CDC’s Morbidity and Mortality Weekly Report noted a dramatic increase in the percentage of young women who had a prescription for an ADHD medication filled during 2003-2015.

Researchers reviewed a database of outpatient pharmacy drug claims for ADHD medications filled for or by teens and women between 15-44 years old. They saw:

When presenting these numbers, researchers state the specific public health concern regarding pregnancy and ADHD medications. Almost half of pregnancies in the United States are unplanned and research into the possible effects on either a pregnancy or a developing baby is limited. Women who employ medication as part of their treatment plan may be several weeks or more into their pregnancies before realizing they are pregnant.

What these numbers mean for women with ADHD

Lead researcher Kayla N. Anderson, PhD, says collecting and understanding these numbers is part of the CDC’s Treating for Two: Safer Medication Use in Pregnancy initiative. Medications for ADHD might increase the risk for pregnancy loss and harm to the developing baby, which are important health concerns for women who may become pregnant.

“We want to provide this information to the public, so women can take this information and feel empowered in making their health care decisions,” Dr. Anderson says. “This is a really important topic area. We consider it a public health question.”

Dr. Anderson says she hopes women will use this information to open important conversations with their prescribers about medication management and their family-planning goals. Just as importantly, she hopes the numbers will be useful in conversations about public health.

“For us, we’re really interest in providing information for the safety of these medication before and during pregnancy,” she says.

The increased numbers can also indicate better recognition of the value of treating ADHD in teens and adults, especially for women, says Max Wiznitzer, MD, co-chair of CHADD’s Professional Advisory Board. As more girls are diagnosed than ever before, it’s natural that the majority will continue to have symptoms and employ medication into their young adult and adult years. He also cautions that the increase in filled prescription may not be for a diagnosis of ADHD, but for other possible conditions that stimulant medications may be treating.

“ADHD likely represents that largest percentage, but narcolepsy and sedation from other medications can be a reason,” Dr. Wiznitzer says.

The increase in the number of teens and women who have prescriptions for ADHD medication is not a surprise to Ellen B. Littman, PhD, co-author of Understanding Girls with ADHD, Updated and Revised: How They Feel and Why They Do What They Do.

“I couldn’t be more thrilled that we’ve gotten to the point where we’re talking about what kinds of treatment there are for women of childbearing age,” she says, “and that the CDC would be talking about numbers of women being diagnosed and treated. The increase is about the fact that as we raise awareness, it’s allowed a lot more women and girls to be diagnosed and receive treatment.”

ADHD in girls and women is a far-reaching disorder, she says, and the symptoms often reach beyond the DSM-5 criteria. Symptoms affect all parts of a woman’s life, including at home, at work, in her family, and in her social relationships. Many women struggle with emotional regulation as a symptom of ADHD. Research is also uncovering the role that estrogen plays in ADHD symptom intensity and treatment.

“For women, ADHD is not in terms of behavioral symptoms [as it can be for men and boys],” she says. “In fact, the behavioral manifestations are sometimes the least problematic. For women, it’s the quality of life, in management, their ability to regulate emotions, and decisions, and how all of these things impact their sense of self.”

When the first edition of Understanding Girls with ADHD was released in 1999, Dr. Littman says there was very little research on how the disorder affects girls and women. She and co-author Kathleen Nadeau, PhD, based much of their information for the first edition on their own clinical experiences.

“Over time, research has supported almost everything we put forward then,” she says. “We’ve been trying in these past 20 years to raise awareness in all the ways ADHD manifests in women. There’s no question that all of the research supports the idea that medication can help people. And that sense of being in control, especially in the face of frustration of being a parent, is a major factor in being the kind of parent you want to be. We know there are negative outcomes for undiagnosed and untreated ADHD in women who have ADHD.”

Talk with your health care provider

Women who may become pregnant should discuss with their health care provider their family planning goals–whether to have children or not, to delay childbearing, and when they hope to become pregnant—along with their treatment options.

Treating ADHD symptoms, says Dr. Littman, improves a woman’s quality of life. For women who are mothers, it can help them improve their parenting skills. For all women, treatment can help with social skills and improve work performance.

If you are considering pregnancy or you learn you are pregnant unexpectedly, discuss your treatment options with your prescriber. In addition to medication management, behavioral management and lifestyle changes can be helpful in addressing ADHD symptoms, along with counseling and cognitive-behavioral therapy.

Are you concerned about the increase in the number of teens and young women who employ medication as part of their ADHD treatment plans?

Managing Unhappiness When Your Child Has ADHD