Preventing Cyberbulling When Your Child has ADHD 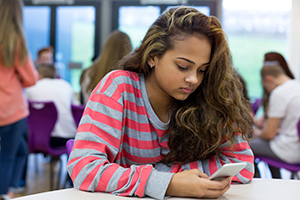 It used to be if your child was bullied, she could come home and get away from her tormentors. Technology has changed this—cell phones, tablets, and social media can now allow the bully to reach your child wherever she is, at home as well as in school.

Children affected by ADHD are at a greater risk of being bullied by peers. Difficulties with social interactions, keeping and making friends, and academic struggles can single a child out.

Whereas traditional schoolyard teasing happens face-to-face and can be dealt with in real time, online bullying can feel even more cruel because it is “public” and can be seen by all your child’s peers and beyond. Online bullying has the potential to go viral, and can quickly become overwhelming. It is no longer a limited interaction between two people or a small group, other people who know your child can see online comments or photos. Those comments or images can be passed along to people your child doesn’t know, magnifying the impact. Bullies can hide behind a disguise, posing as someone your child knows or as a new “friend” she has met online.

Parents need to learn about the dangers of bullying and cyberbullying and how to help their children understand the differences between appropriate teasing and bullying. You can make a difference in preventing bullying and helping your child navigate the experience of having been bullied.

The difference between teasing and bullying

Teasing is often a part of growing up. It can be friendly and intended to strengthen relationships or influence someone’s behavior. It can also become negative, harsh, or cruel. When does it cross the line to bullying?

Children who are teased can often influence whether the behavior stops. When the teaser recognizes that her friend or peer is upset, she stops her behavior. In contrast, a bully intends to be hurtful or threatening toward her victim, to either cause the other person to be embarrassed or to make the bully look better in some way. Bullies frequently intensify their behavior when they realize their victims are upset or hurt.

From bullying to cyberbullying

Bullying is any unwanted aggressive behavior that involves a power imbalance and is repeated multiple times or is highly likely to be repeated. A recent survey of students between grades 6-12 in the United States found that 28 percent have been bullied, while more than 70 percent witnessed bullying. Of those who experienced bullying, only 30 percent of students reported it to an adult. When an adult did intervene and address a bullying incident, the bullying stopped 57 percent of the time.

Cyberbullying takes place through electronic sources like texting, social media, or posting videos or pictures online, though it frequently begins in real life encounters. It can be done by sending messages or pictures directly to the victim, or indirectly by stealing passwords or hacking into someone’s account, posing as the victim and posting negative messages. In other situations, information or images of the person who is bullied are passed to other people, or the person is discussed among others online in cruel or degrading ways.

While teens have always looked for ways to fit in, social media now provides a way to measure how well they fit in—and they are responding to it. A study in Psychological Science shows that when teens viewed pictures with more “likes” than others, or viewed their own pictures that had been “liked,” they experienced a greater response in the reward centers of their brains than when they viewed pictures with fewer “likes.”

Signs that a cyberbully is targeting your child

Bullying can cause serious mental health difficulties for your child. These can include anxiety and depression, sleep challenges, a loss of interest in activities she once enjoyed, and challenges at school, either academically and/or socially. When intense feelings of loneliness, worthlessness, and hopelessness take over, it can lead to a risk of suicide for some teens. StopBullying.gov reports most teens who are bullied do not engage in suicidal behaviors unless there are other factors involved. For more about the issues that contribute to suicide risk, visit Violence Prevention Works and read ADHD Can Increase Risks from Depression.

Red flags that may indicate your child is a victim of cyberbullying include:

For more information and warning signs, including signs that your child may be cyberbullying others:

Learning more about bullying and teaching your children about teasing, bullying, and cyberbullying before it happens is key for prevention. If you are concerned that bullying is an issue for your child, here are some tools for addressing it:

—Adapted from the Cyberbullying Research Center’s What To Do When Your Child is Cyberbullied: Top Ten Tips for Parents

Cyberbullying can have a profound effect on your child’s life, and is more likely to happen if your child is affected by ADHD. You can help your child learn about cyberbullying and develop steps she can take to address it when it occurs. When your child knows you take the situation seriously and that you don’t blame her for what has happened, she will have a better chance of moving past the experience and developing healthy friendships.

Has your child been bullied? How did you help her to resolve the situation?

Cyberbullies can follow your child through social media—so nowhere is safe from the bully! You can take steps to address bullying and help your child with ADHD create healthy friendships. Keep reading for what you can do.

Preventing Cyberbulling When Your Child has ADHD

A Short Definition of ADHD