Spanking For ADHD? Don’t Do It! 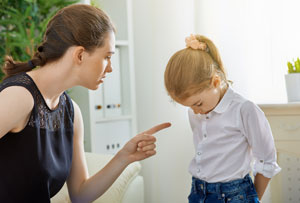 Many adults have memories of being spanked for behaviors related to ADHD, whether or not they had a diagnosis at the time. Spanking remains somewhat controversial among parents, but medical and parenting experts have long noted that the practice does more harm than good. It is an established fact that one cannot spank the ADHD out of a child.

The American Academy of Pediatrics, which represents the majority of pediatric doctors in the United States, discourages spanking. It recently released a policy statement, “Effective Discipline to Raise Healthy Children,” on the harmfulness of spanking any child and advises against its use under any circumstances. The AAP defines spanking as “noninjurious, open-handed hitting with the intention of modifying child behavior.” Based on a survey of pediatricians from around the United States, the recommendation is supported by evidence demonstrating the many ways spanking and other forms of corporal punishment cause long-term damage to a child.

Why not to spank

Spanking hurts physically, but its effects may go much deeper.

“Parents are models. So if parents are modeling aggressive behavior, what does it show the child?” asks clinical psychologist Dara Babinski, PhD, an assistant professor in the psychiatry department at Pennsylvania State University. “It increases the likelihood the child’s going to engage in aggressive behavior as well. It may be confusing for children: ‘If mommy’s spanking me, why can’t I hit my sister when I’m frustrated?’ Spanking is not teaching new skills, offering replacement behaviors, or teaching the child what to do in the next situation.”

Studies cited in the AAP policy statement show that while the use of spanking is slowly going down, its aftereffects remain significant: Children who were spanked twice a month or more by age three were more aggressive than others by age five. And children who were spanked more often responded with more bad behavior, which then led to more spanking, resulting in a “complex negative spiral.” So not only is spanking not teaching better behavior and self-regulation skills, it is leading to more misbehavior and aggression.

What’s more, spanking can damage the relationship between parents and children, leading to greater behavioral difficulties and poor relationships with their parents when they are teens and young adults.

Spanking when a child has ADHD

Dr. Babinski says some parents of children with ADHD may react strongly—with spanking—to disruptive and other negative behaviors that come with the territory. Those include everything from nonstop humming, to grabbing a toy from a younger sibling, to misbehavior at school.

“There’s just a greater likelihood they’re going to push their parents’ buttons,” says Dr. Babinski. “Over time, if the likelihood of spanking is higher in families where a child may be more challenging or their behaviors may be more challenging, what does that look like? They’re getting spanked more. The parent-child relationship is more strained in comparison to a child who isn’t displaying those behaviors nearly as frequently.”

In some ways, the child who is spanked controls the relationship with his parents, explains Dr. Babinski. The child acts out and parents respond by spanking. But parents who can be proactive by helping their children learn to control their own behaviors are more likely to be able to help their children learn better coping skills, which is really what’s needed.

“Effective disciplinary strategies, appropriate to a child’s age and development, teach the child to regulate his or her own behavior,” write Robert D. Sege, MD, PhD, FAAP, and Benjamin S. Siegel, MD, FAAP, for the AAP. “[They] keep him or her from harm; enhance his or her cognitive, socioemotional, and executive functioning skills; and reinforce the behavioral patterns taught by the child’s parents and caregivers.”

Effective child discipline should be seen as part of a long-term teaching process rather than a punitive one. Helping children to recognize mistakes, make apologies and repair damage, and develop skills to prevent further mistakes are important parts of teaching good behaviors.

Step one, says Dr. Babinski, is for parents to model the kinds of behaviors they expect in their children. From their earliest years through their teens, your children are watching your actions and reactions, and modeling themselves on what you say and do.

Understanding how ADHD symptoms affect your children’s behavior is important when your child misbehaves. What appears to be poor listening or ignoring an adult could be inattention or scattered attention to several things in the environment. It could be that the child’s error is due to symptoms that cannot be avoided or can be addressed by learning new coping skills or using tools (like writing a to-do list, rather than relying solely on memory). Instead of taking a punitive approach by spanking, taking a corrective approach of addressing the trouble caused by symptoms can be more effective.

It’s also important to establish family rules, so your children know what’s expected of them and you. Rules can relate to routines, such as getting up at a certain time on school days, putting dirty dishes in the dishwasher, and finishing homework before screen time. Discuss the rules in a family meeting or keep a list posted where everyone will see it often.

The rules don’t have to be overly detailed or complicated. Every once in a while you might mention one, just to reinforce it. If everyone is expected to stay at the dinner table until the meal is over, as you sit down to eat you might say, “Remember, we’re all working on our rule of staying in our seats until everyone has finished eating, right?” It might take children with ADHD longer to retain rules, but clear, consistent practice can help improve behavior.

It’s also essential to spend some time reflecting on how you’ll respond to your child’s negative behaviors when they arise so you are less likely to react strongly in the moment. Practice praising your child for the little things he accomplishes. Children with ADHD get a lot of negative and corrective feedback from their parents, teachers, and peers, which can be discouraging after a while. It’s nice to even things out with comments showing you appreciate the efforts he’s making.

“For every time you tell your child to stop doing something, try to look for three additional ways you can balance that out with a positive,” Dr. Babinski suggests. “Instead of saying, ‘Sit down in your chair,’ which is a directive, say, ‘Wow, you sat down so quickly. Nice work. You really have your listening ears on.’”

As with all things related to parenting, pick your battles. The humming while your son does his homework might grate on you, but it’s a small price if it helps him focus on his math problems.

Join the discussion: What are some tools you’ve used with your family to help change behavior in a positive way?

Resolved to Get Organized? We Can Help

Spanking For ADHD? Don’t Do It!