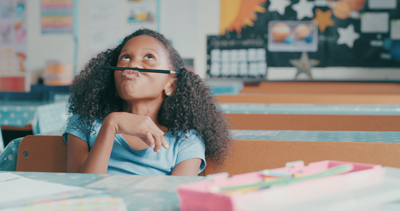 Maybe you’ve lost count of the times you’ve told your child to stop biting their nails, bouncing their legs, or twirling their hair. What seems like annoying behavior may actually serve a purpose, like helping your child to self-soothe or increase focus.

“I don’t even realize I’m doing it,” says an adult who has ADHD and whose children also fidget as part of having ADHD. “My legs bounce all the time when I am sitting. I’ve done that ever since I was a kid. I’m certain that bouncing my legs keeps my brain awake, because I’ve noticed that I only do it when I am tired or have to sit for long periods and focus on something. Two of my children also stim; both of them chew their nails when they are nervous or bored or are doing something complex, like reading or studying.”

How is stimming related to ADHD symptoms?

Stimming can take many different forms:

Writing the same thing over and over or excessively sharpening pencils are other types of self-stimulatory behavior.

“My son got in trouble at school because he would constantly get out of his seat to repeatedly blow his nose,” says a mom whose son is now a teenager. “We had to let his teacher know that this was a self-regulatory behavior, that his brain was trying to help him better focus through this type of activity.”

Many kids fidget, including those with the hyperactive or combined presentations of ADHD. Your child may fidget often, especially in situations where they have to sit still for long periods of time or are required to engage in a task that they don’t find interesting. Fidgeting is recognized as self-stimulatory behavior. Parents shouldn’t worry too much, though, because this behavior might actually be helping the child focus. Researchers Tadeus Hartanto, BS, Samantha Lewis, MD, and Julie Schweitzer, PhD, from the ADHD Program at the University of California Davis MIND Institute, found that fidgeting helped children with ADHD to better focus and complete complex tasks.

“We hypothesize that the increased movement seen in the children with ADHD, often labeled as hyperactivity, is a way for these children to unconsciously compensate for underarousal or underactivity in some brain regions commonly associated with ADHD,” they reported.

If your child stims, should you be concerned?

When should you be worried about your child’s fidgeting, repeated throat clearing, or chewing the inside of their cheek? If your child’s stims cause injury or are interfering with daily tasks, it’s time to get help. Fidgeting or other self-stimulatory behaviors, like repeating sounds at school, can be a distraction for other students. If this is the case, contact your child’s healthcare provider to come up with a treatment plan. Medication as part of treatment for ADHD can help reduce these behaviors.

“One of the ways you know ADHD meds are treating ADHD is that there is a calming of something called stimming,” writes one woman on a popular social media site. “My stimming is often tapping or leg jiggling so I can stay focused, because I feel bad if I zone out. I can also pick acne, and ADHD meds treat this extremely well.”

Behavioral therapy can also help your child be more aware of the ways they stim and can help them develop fewer distracting behaviors if necessary.

There are ways to control self-stimulatory behaviors, including fidgeting, and do it in less distracting ways, says Carey Heller, PsyD, co-chair of the editorial advisory board for CHADD’s Attention magazine.

“Using your own body parts (such as feet or hands) and moving them in a controlled way is a great tool to use for older children, teens, and adults, because it does not require any items and may not be really visible to others,” says Dr. Heller. He recommends less obvious stims, such as tapping your fingers on your desk individually once, wiggling your toes ten times, or tapping your feet five times.

“The idea that you can harness fidgeting to improve focus may be somewhat new and some people may view it as unconventional,” says Dr. Heller. “Nonetheless, as a clinical psychologist, I have seen firsthand countless times the real impact that harnessing fidgeting can have on people of all ages in improving focus.”

Join the conversation: Does your child use repetitive behaviors or fidget to calm themselves or increase their ability to pay attention?

ADHD and the Effects of COVID-19 on Health and Education

Podcast: Will ADHD Symptoms Improve with Marijuana Use?