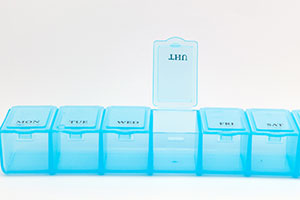 If a child is employing medication as part of a treatment plan to address ADHD symptoms in school, then the start of summer vacation should be a good time to take a break from those medications, right? Many families do, in order to judge medication effectiveness or give the opportunity for a growth spurt.
Maybe summer is a good time for a “medication holiday,” says Craig Surman, MD, an assistant professor of psychiatry at Harvard Medical School, and scientific coordinator of the Adult ADHD Program at Massachusetts General Hospital. He is also a co-chair of CHADD’s Professional Advisory Board.
“The core issue is, what’s right for the individual child,” Dr. Surman says. The most common reason parents consider a vacation from stimulant medication is a concern about their child’s growth or a lack of an appetite. A starting point for such children might be for the doctor to prescribe a lower dose or a different duration of the same medication. Another option is to switch medications, including trying a non-stimulant medication. It’s also important to keep in mind that physical growth in a child with ADHD is often delayed, much like other things related to maturity—growth is just more visible. The key is to keep an eye on your child’s growth chart and check that it follows a trend line, says Dr. Surman.
Time for a holiday?
If you are concerned medication might be slowing your child’s physical development, you have to consider that in light of the effects of the ADHD itself. The week your teen is starting a new job, for example, is probably not the best time to cut out medications that are likely to help him adjust to an unfamiliar routine and get along with new people. And if he’s driving, taking him off stimulants is likely not a good idea.
It’s also important to remember that all medications have possible side effects. Dr. Surman says parents should regularly compare a medication’s benefits to possible side effects.
“I always come back to, what do we actually know about this individual and their experience and the plus-minus” of taking medication, Dr. Surman says. “One of the benefits of taking time off from medication in a planned way is reevaluating untreated needs. And one of the goals of treatment, in general, is to help an individual learn new strategies and to find the right environment so that they can minimize the need for medicine.”
As your child matures, ADHD symptoms are likely to change, especially impulsive-hyperactive traits. Temporarily stopping medication allows parents and medical professionals a chance to see what benefits it may be having for the child. They can also take another look at which symptoms are making medication necessary and how those symptoms may have evolved since medication was first prescribed.
“I want people to go off medication intermittently and reevaluate the need for the medicine,” Dr. Surman says.
Doing so also gives teens in particular a chance to experience social interactions and family dynamics in a new way and see how they feel. Dr. Surman says patients will tell him things just suddenly “clicked” for them, and they don’t know why. It could be that the part of the brain that is responsible for decision making, planning and organizing, and other executive functions naturally developed as they got older. Studies have shown this may happen. Or maybe, says Dr. Surman, they just fell in with friends that have been more supportive of them or that motivate them to work harder.
It can be unclear what causes people to do better, “and overvaluing medication is a bad idea,” Dr. Surman says. He adds that it is important to remember many of the things medication corrects are related to follow-through and project completion, but that there is more to that in living an organized life, he says.
“You can [make up for] some aspects of ADHD by using reminder systems and having routines, having accountability to individuals and breaking long-term projects into deadlines that you actually care about,” he says. “That really can make a difference for people.”
Research on medication holidays
There are few scientific studies as to when might be a good time to take a medication holiday. One pair of researchers did a review of studies and agreed with Dr. Surman’s recommendation to use the time off from medication to assess developmental changes your child may have gone through since starting it. They also noted that side effects such as insomnia or difficulty sleeping and decreased appetite were often improved by taking a short break from stimulants. The American Academy of Pediatricians mentions the idea in its guidelines for treatment of ADHD in children but offers no specifics or recommendations.
Thriving in the way best for your child
As with all medication-related changes, any alterations to stimulant dosages or decisions to take a medication holiday should only be done with a healthcare provider’s guidance. Children and parents need to be aware, for example, that symptoms of withdrawal, such as low energy and feelings of depression, may arise. But if a break is going to happen, school vacation is the most natural time to take it. And whether or not the medication or dosage changes in the end, it’s worth putting in the time without medications to see how your child has developed since starting them and how his ADHD symptoms have evolved.
“I think it’s a good philosophy to try to help an individual thrive in the most natural way for them, to change people’s brains as little as possible,” Dr. Surman says. “But part of having a healthy brain is being able to focus and follow through on what society wants you to do, so you can use all your brain’s parts.”
Looking for more?
If your child has taken a medication vacation, was it a helpful experience?