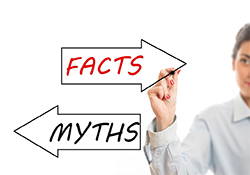 When German physician Melchior Adam Weikard first wrote about attention disorders in children—what we now call ADHD—in 1775 he had to do it anonymously. People were so upset by his medical description that they attacked his character and trashed his book.  Our understanding of ADHD has grown greatly since then, but there are still some myths about the disorder. Here are the top 3:

ADHD is Not a Real Disorder

This is one of the most studied cognitive conditions. There have been more than 10,000 clinical and scientific studies published on ADHD. Additionally, brain scan research studies have shown that there are differences in the development of the brain in individuals with ADHD compared to those without the disorder.

ADHD is a Disorder of Childhood

The rate of children diagnosed with ADHD has increased—but the prevalence rate, or number statistically believed to haveADHD, has remained about the same over the years.

The rate of children diagnosed with ADHD has increased—but the prevalence rate, or number statistically believed to have ADHD, has remained about the same over the years. A better understanding of ADHD by parents and doctors is thought to be behind the increase in diagnosis.

Read more at Myths and Misunderstandings.