Why Medicine Should Taste Good 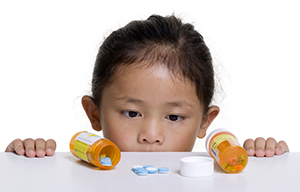 There is a universal truth: children don’t like to take medicine.

Many children have trouble swallowing pills and most medications—whether a pill, tablet, or liquid—taste bitter or leave an awful aftertaste. Adults may be able to force themselves past the bitterness of medicine, but for children, getting them to take medicine can be a struggle.

“If the medicines have a bad taste, the kids are not going to take them,” says Max Wiznitzer, MD, a pediatric neurologist and co-chair of CHADD’s Professional Advisory Board. Dr. Wizniter has worked with many young patients and their parents to find a solution to the bitter-pill problem. “Things have to have a reasonable taste so they will be willing to take them. When you try to give kids the regular medications, they won’t take them. They can be bitter and bad tasting, and the kid won’t take them again. That’s not in the kid’s best interest.”

Willingness and the ability to follow the doctor’s instructions about medication is a real struggle for children, he says, including many of the medications for ADHD. The American Academy of Pediatrics, the National Institutes of Health, and other medical agencies have spent a considerable amount of time and research to improve the willingness of patients to take prescribed medications as directed. Improving both the taste and the form of the medicine is part of the focus, he says, along with reducing the number of times a child must take a medicine in a day.

What the research has concluded, according to Dr. Wiznitzer, is that kids are more likely to take medications that taste good instead of ones that taste bitter.

When parents have children who have problems taking medications, Dr. Wiznitzer recommends talking to the pediatrician about alternatives such as an easier-to-swallow liquid, a medicated patch placed on a child’s skin, or medication with a good flavor designed to dissolve in the child’s mouth or in a small amount of water in a glass. Pharmacists can prepare medication with specially-made flavors, which include bubblegum, watermelon, or grape.

“Pharmacists have a whole battery of things than can add to make it taste better,” he says.

A new, orange-flavored tablet that dissolves on the tongue without water was released for sale this summer, prompting some critics to express concern that easy-to-take ADHD medication may increase medication abuse. Dr. Wiznitzer is dismayed as a pediatrician when he hears people argue like this against flavoring medication to improve the likelihood that children will take their medication without a fuss.

“We have [fruit-flavored] products like that on the market; they’re called vitamins,” Dr. Wiznitzer says. “Are you saying you shouldn’t make any medicine taste good? Nobody says we should make vitamins taste bad because kids may abuse them. The idea is you make medication in a formula that kids will take. And then adults have to teach them that it’s medicine and not candy and then safeguard the bottles, like any medication. Just because it affects the brain doesn’t make it any less a medicinal condition than if it affects any other part of the body.”

ADHD medications have to be taken at least once a day. Anything that improves the chances that the kids will take their prescribed medications improves the likelihood that the treatment will help. Taking the struggle out of getting kids to take their medication can also help improve the parent and child relationship.

Why Medicine Should Taste Good

Q&A: How Do I Get Updates on My College Student?

How to Find a Therapist Near You

Guidance on 504 Plans Issued by U.S. Department of Education