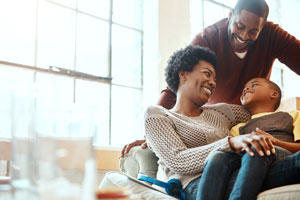 Rahn Kennedy Bailey’s training and practice as a forensic psychiatrist introduced him to the real-world costs of undiagnosed ADHD.

Forensic psychiatrists use their medical training or knowledge in psychiatry to solve a legal question. Such specialists might write a report about an employee who has a disability, deal with a family that is challenging a loved one’s mental competency, or testify in court as to someone’s mental condition. Dr. Bailey, however, also worked and served in settings where children were in trouble, such as juvenile detention centers and school systems. As he grasped the extent of the problem with underdiagnosed ADHD not only with children but also adults, he devoted his energies to advocacy.

Dr. Bailey is the chair of the Psychiatry and Behavioral Medicine Department at Wake Forest Baptist Health. A former member of CHADD’s professional advisory board, Dr. Bailey is also a recognized former leader of the National Medical Association. The NMA’s mission is to "advance the art and science of medicine for people of African descent through education, advocacy, and health policy to promote health and wellness, eliminate health disparities, and sustain physician viability."

Gina Pera, author of Is It You, Me, Or Adult A.D.D.? Stopping the Roller Coaster When Someone You Love Has Attention Deficit Disorder, sat down with Dr. Baily for CHADD’s Attention magazine to discuss some of the myths and misinformation surrounding ADHD.

Dr. Bailey: Stigma and propaganda hit some communities harder than others. One reason I spend a good deal of time educating in the African-American community about ADHD is that I was surprised to see the sheer number of people affected by it as well as the variety of settings where this is evident.

Of course some simply don’t want to hear about ADHD or any other diagnosis. They might say, "I’d rather be bad than mad." That is, some people see less stigma in the legal option than in the psychiatric one. Of course, this is true not only in the African-American community.

Another factor is that [anti-psychiatry groups] have been geared to destroy psychiatry, and the groups have set a stronghold in the African-American community. They find one person who dramatically tells about his or her one bad experience with psychiatry, whereas clinicians and scientists refer to peer-review studies, based on dozens and hundreds of patients and the structure of the data set.

Think about it: If someone stands before a group of people and rants about cancer being a hoax to people who’ve lost a loved one to cancer, that speaker will not be given the time of day. But when it’s ADHD, many people don’t think they know anyone who has it. And certainly they don’t associate anyone’s death to it, even though ADHD is associated with higher risk of injury from car accidents and so on.

Stigma and propaganda can affect some communities harder than others, causing difficulties that don’t need to happen. Dr. Rahn Bailey spends a good deal of time educating the African-American community about ADHD because he was surprised to see the sheer number of people in this community affected by the disorder, and in the variety of settings where ADHD impaired their lives.