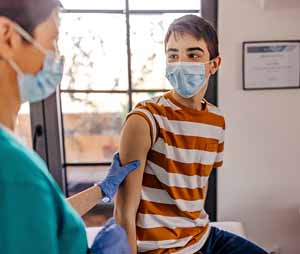 The number of adults and teens in the United States who have received at least one dose of a COVID-19 vaccine is growing daily, and that is good news in curtailing the pandemic. Medical professionals are hopeful that the US Food and Drug Administration will authorize for emergency use or approve a vaccine for children ages 6-12 sometime later this year or in the beginning of 2022.

Some parents have expressed concern about the speed of vaccine development. They also worry that something in the vaccines for COVID-19—or any vaccine—could cause ADHD or aggravate existing ADHD symptoms. While a childhood vaccine has not yet been approved, several studies are currently underway that are intended to lead to approval. As of right now, these clinical trials are showing positive results and the vaccines appear to be safe for children.

Research has become clearer that ADHD is genetic, runs in families, and for a smaller number of people could be related to prenatal exposure to alcohol or tobacco smoke. In a few cases, researchers are exploring the possibility of an environmental pollutant.

What researchers are sure of, though, is that ADHD is not caused by vaccines given to prevent childhood illness. Medical professionals, based on existing research on vaccines, do not believe that the new COVID-19 vaccines will play a role in ADHD.

Some of the vaccine hesitancy related to ADHD and the COVID-19 vaccines mirrors existing misinformation related to childhood vaccines already administered. A fraudulent study published in 1999 claimed the measles-mumps-rubella (MMR) vaccine was the cause of autism and autism spectrum disorder. This sparked two important trends—the first prompting thousands of parents to forgo or delay vaccines for their children out of the fear of the child developing autism. The second was a flurry of studies to confirm or refute the study’s assertion. In the end, twelve years after the original study was published, the Lancet retracted the published study and the study author’s license to practice medicine was revoked by United Kingdom’s General Medical Council.

Researchers across the globe conducted numerous studies on the MMR vaccine and other vaccines related to developmental disabilities. With the exception of situations where the child had a pre-existing condition, researchers found no evidence that vaccines caused autism.

But in the internet age, where opinion may be weighed equally to fact, the myth persists. Because many people associate ASD with ADHD, the idea has expanded to include vaccines having a relationship to ADHD or ADHD-like symptoms. For some people, this association has now jumped to the upcoming vaccines intended to end the pandemic.

Many websites and blogs state that vaccines are somehow the root cause of ADHD, either by causing inflammation in the body or otherwise creating damage to certain areas of the brain. There are popular websites hosted by some with medical degrees and others who claim to be experts in natural health that continue to promote this claim. Some alternative health practitioners also claim vaccines or ingredients in vaccines cause ADHD and share this belief with their clients or online audiences.

The American Academy of Pediatrics assembled a listing of studies that examined vaccines and ASD and related disorders. Vaccine Safety: Examine the Evidence lists 43 medical studies that conclude there is not a relationship between vaccines and ASD or related cognitive conditions, such as ADHD.

For ADHD specifically, the Children’s Hospital of Philadelphia lists the results of three studies to show that ADHD is not caused by vaccines. Those studies are:

Together, these studies state there is no association between the timing of vaccines or the ingredients in them to the development of ADHD.

“Parents can be reassured that vaccines do not cause ADD/ADHD or related conditions,” according to the Children’s Hospital of Philadelphia.

Returning to COVID-19 specifically, Jeremy Warhaftig, MD, chief of pediatrics at South Shore Medical Center, writes, “There’s no medical reason to suspect that the vaccine side effects will be worse for young people with autism or ADHD.”

Max Wiznitzer, MD, is familiar with the research on suspected links between ADHD and vaccines. Dr. Wiznitzer is a pediatric neurologist at Rainbow Babies & Children’s Hospital in Cleveland, Ohio. He is an associate professor of pediatrics, neurology, and international health at Case Western Reserve University and is the co-chair of CHADD’s professional advisory board.

He says the research shows there is no connection between vaccines and ADHD.

“The diseases for which vaccines are given do not cause ADHD,” says Dr. Wiznitzer. “If the disease does not, then the vaccine, which is made from the bacteria or viruses, should not since they have the same ‘active’ components.”

What about the other compounds in vaccines, called adjuvants, which are intended to increase the body’s immune response and create a stronger immune reaction to protect the person from the disease? Some people have expressed concern about those compounds related to ADHD and other conditions.

“Research has not shown an association between number of vaccines given at one time and ADHD symptoms,” he says.

Additional information on ADHD and COVID-19

During the pandemic, researchers gathered and reviewed evidence of how those with ADHD might be particularly affected by a COVID-19 infection. At least two studies have shown that adults who have ADHD generally have worse health outcomes during and following the illness than other adults. This means those with ADHD are at greater risk healthwise than those who don’t have the disorder.

One study noted that ADHD symptoms often impair a person’s ability to seek medical help in a timely manner and to follow through on prescribed treatment. A second study demonstrated that untreated ADHD increased a person’s risk of both contracting COVID-19 and recovering from it, while receiving ADHD treatment leads to better health outcomes if someone does become sick.

Frequently, popular belief combines ADHD and ASD by claiming they share the same cause because their surface symptoms often share similarities, even though they are two distinct conditions. The false belief that vaccines are related to the cause of autism has moved into the world of ADHD, again claiming vaccines as the cause of ADHD.

ADHD is not caused by vaccines, Dr. Wiznitzer says. The ingredients, the inert bacteria or virus, and the adjuvants have no impact on the development of ADHD.

Research has shown ADHD is an inherited condition, and when it is not inherited may be related to prenatal exposure to specific substances—none of which are vaccines. There is no evidence that ADHD is caused by a single vaccine or a combination of vaccines.

There is a great deal of evidence that vaccines have saved lives and contribute to a healthier population. Existing research on COVID-19 vaccines and ADHD points towards improved outcomes for adults, with the expectations of the same improved outcomes for children when a vaccine becomes available. Following the recommended vaccine schedule for a healthy child, including a COVID-19 vaccine when available, is one of the best things a parent can do to protect their child’s health and future.

For more information on vaccines, vaccine safety, and your child’s health, visit:

Have you wondered about vaccines and ADHD? Share your thoughts with our community.

A New ADHD Diagnosis: The Next Steps