ADHD Can Increase Risks From Depression 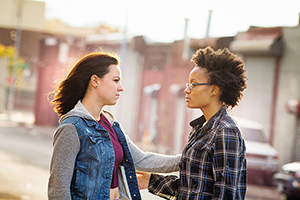 A recent series by an online streaming video service, based on a young adult novel, has brought the conversation about depression and suicide home for many high school students and their families. For families also affected by ADHD, this has raised additional concerns for young people struggling with ADHD symptoms and social lives.

Roberto Olivardia, PhD, a Harvard Medical School lecturer in Psychology and a member of the CHADD Professional Advisory Board, says parents and professionals are encouraged by the discussion, but share concerns that many people don’t know what to do when a friend or a young person confides that she is considering suicide.

“People with ADHD are a high risk for mood disorders and anxiety,” Dr. Olivardia says. “It’s the rule rather than the exception that people with ADHD have at least one other co-occurring condition. That already increases the risk of suicide.”

Recently published research examined first onset of depression for children in middle and high school.  It found that depression can begin younger than 11 and by age 12, girls are experiencing depression at twice the rate of boys. By the age of 15, the rate of first onset for depression in girls is a little more than three times as much as it is for boys (13.2 percent for girls and 4.4 percent for boys). At the age of 17, rates decrease for girls but start to climb for boys. It demonstrates that during the teen years, girls appear to experience depression at three times the rate of boys (36.1 percent for girls and 13.6 percent for boys). Furthermore, the research also showed that boys experience conduct problems and academic difficulties at a higher rate than girls during the same time period. The study did not include information about ADHD.

“If you start thinking of yourself as a failure, as not smart enough and not worthy, if you’re told you’re stupid or lazy, you have a perfect storm of factors” that increases the risk for some people, Dr. Olivardia says. “It’s one thing to fail at something, and then another to feel completely hopeless because you’ve failed.”

Someone affected by ADHD who is also coping with the symptoms of depression might not display what are thought of as common symptoms of depression, Dr. Olivardia says. The person could engage in other behaviors, such as overworking or overscheduling her time, spending beyond her budget or making impulsive purchases, substance abuse or promiscuous behavior. A person’s behavior could even seem upbeat, as she finds as many things as possible to be involved in.

“It’s almost as if they’re trying to distract themselves from what they’re feeling,” Dr. Olivardia says. “I’ll often see, when someone is depressed, that they are literally exhausting themselves.”

Women and men experience depression at similar rates, Dr. Olivardia says, but men are often raised to hide the painful emotions they are experiencing and not seek help as often when they are hurting.

“It’s not an accident that the onset for depression is often at puberty,” Dr. Olivardia says, noting a lot of teen and young adult literature discusses depression and suicidal thoughts. “With ADHD teenagers, being aware that puberty plays a role [in these feelings] is important. It’s very hard for them, especially when you’re not able to cognitively process what you’re experiencing.”

What to do if someone is thinking of suicide

“This is serious stuff,” Dr. Olivardia says. “In this generation, in particular, there is much more impulsivity. Put ADHD on top it, and it’s even more risky.”

Dr. Olivardia recommends that if a friend or young person comes to you:

Join the discussion on preventing suicide.

Tips for Young Adults: Transitioning to College and Work

When ADHD Has Coexisting Conditions

ADHD Can Increase Risks From Depression