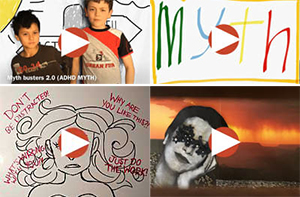 The ADHD Awareness Coalition has announced the winners of this year’s awareness video contest.

October was ADHD Awareness Month. CHADD, along with Attention Deficit Disorder Association and ADHD Coaches Organization, with ADHD Europe, annually sponsors activities such as the video contest to increase awareness about ADHD. About 17 million Americans are affected by the disorder.

Members of the ADHD community were invited to submit videos “busting” myths about the disorder and share what it is like to live—and thrive—with ADHD. Voting continued through October.

“ADHD can be good, bad at the same time,” says Kaydence, a high school student who shared her ADHD Story during awareness month. “But there are ups, like being social.”

“I was diagnosed with ADHD when I was in kindergarten,” Melissa says. “I was told throughout middle school and high school that I would be lucky to graduate, meaning nobody thought I would be able to do it. I’m happy to say I am now preparing to graduate college with a double major. I struggled to get where I am but now I want to go back and tell everyone that put me down that I made it. My ADHD didn’t stop me just encouraged me more.”

This year’s video judges were Alan Brown of ADD Crusher and Jessica McCabe from HowToADHD. Ms. McCabe was a presenter during the 2018 International Conference on ADHD.

Fifteen videos were entered into the contest this year. Winners receive

Adult Category: ADHD and the Creative Mind by Rudy Saenz

This year’s winners will receive an iPad Mini, gift cards, and memberships in CHADD and ADDA, along with two hours of coaching or consulting through ACO.

“Thank you to all the creative people who have submitted ADHD videos, ADHD art, ADHD stories, and ADHD memes that inform and inspire,” the ADHD Coalition coordinators say. “Although October is designated as ADHD Awareness Month, learning and sharing information about ADHD is beneficial all year long.”

Join the discussion: Which video is your favorite?

Annual ADHD Conference is ‘Better Together’

Webinar: What Are Realistic Goals When Faced With ADHD?