Are Cell Phone and Social Media Use Causing ADHD? No Evidence 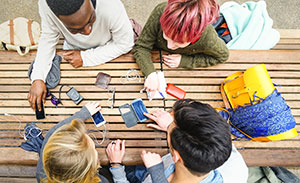 Could our frequent use of digital devices and ever-present social media cause ADHD symptoms? A study published this week suggests it’s possible, while a professor of behavioral health says she has doubts.
Maggie Sibley, PhD, has read the study and says the young people in the study were reporting greater distractibility related to their digital media usage, not a development of ADHD symptoms. And those who were more easily distracted at the beginning of the study naturally reported a greater use of digital media.
Researchers followed 4,100 California high school students for two years. The researchers asked them about their digital media (cell phones, tablets, and computers) and social media (Facebook, Twitter, Instagram) use during that time, checking in with them four times during the study. Students were asked to complete checklists related to their digital media use and how often they experienced 18 ADHD symptoms (nine inattentive and nine hyperactive-impulsive). They were not evaluated for ADHD, either before the start of the study or during the study; instead the researchers relied on the students’ self-reporting through the checklists.
At the end of the study, researchers saw a “statistically significant but modest association between higher frequency of digital media use and subsequent symptoms of ADHD.”
Can cell phones and tablets cause ADHD?
Dr. Sibley is an associate professor of Psychiatry & Behavioral Health at Florida International University and a member of CHADD’s Professional Advisory Board. Her primary area of research is on children and teens affected by ADHD. She said recent headlines suggesting the study claims ADHD could be caused by teens using digital media—frequently through their cell phones or tablets—are inaccurate.
“There’s nothing in this study that could possibly suggest that, even if they’re trying to infer it because it’s interesting to think about,” she says. “I think it’s a little bit of leap to say in this study that digital media use can create ADHD symptoms. If you’re using social media a lot, that could be a source of distraction for you, but that doesn’t mean you have ADHD.
“The good news is there is no evidence in this study or anything else I’ve read that cell phone use would create ADHD,” she adds.
If digital media use wasn’t the cause of ADHD symptoms, then what does the study observe?
“In the study, there’s a correlation between how much you use your phone and how many symptoms of ADHD you say you have,” Dr. Sibley says. “We don’t want to confuse people struggling with ADHD symptoms for a lifetime with a social media behavior that goes away when the social media goes away. All we know is that people who use cell phones also tend to act more distracted, which shouldn’t surprise anyone. Not all forms of distraction are ADHD.”
The problem with checklists
The study also relied on self-reporting and checklists of behaviors and symptoms related to ADHD. The researchers did not include clinicians trained in the evaluation of ADHD symptoms in their study to meet with the students. Dr. Sibley says these two factors provided some inherent flaws into the study.
“We’ve done research showing that about 95 percent of the time, when people say ‘yes’ on a checklist they don’t have ADHD,” Dr. Sibley says. “There’s a lot of reasons why people say ‘yes’ on a checklist. Sometime people are really hard on themselves, they say a bunch of things [self-criticism], but when you look at it they don’t have symptoms—they are being hard on themselves. We have to be really careful what we call ADHD and what is just someone having trouble focusing.”
She adds that teenagers who have an ADHD diagnosis are usually reluctant to share that information, which can also skew the results of a study relying on self-reporting.
The lack of clinicians to evaluate the teens in the study is also a problem, she says.
“The whole point of an evaluation is someone can objectively look through everything [checklists, interviews with the teen and parents, academic and health records] and put the pieces together to make a determination,” she says. “I think we as clinicians know you need to be more careful in diagnosing ADHD than only using a checklist.”
Teens and digital media
Some teens do struggle with their use of digital media and social media outlets, Dr. Sibley says. When they, or their parents, see that this use is affecting their behaviors or their grades and social lives, it’s time to develop family rules to limit social media use.
But parents should not be concerned that a young person who does not have ADHD, especially when there is not a family history of ADHD, will develop the disorder based on digital media use, she says. ADHD is a brain-based condition that generally a person is born with. While it can be first diagnosed during the teen years, symptoms will have been present during childhood.
“We need to be careful of conflating normative behaviors related to social media use with ADHD symptoms,” Dr. Sibley cautions.
For additional reading:
Have you seen your teen’s behavior change related to digital media use?

Are Cell Phone and Social Media Use Causing ADHD? No Evidence

When Depression Co-occurs with ADHD

What to Eat For ADHD