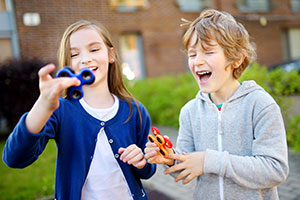 April is Autism Awareness Month. For many families, ASD and ADHD go hand-in-hand and require treatment that takes both conditions into account.

April is Autism Awareness Month. Many people and their families cope with the dual diagnosis of ADHD and Autism Spectrum Disorder. According to recent research, at least 40 percent and many as 70 percent of those who have ASD may also have ADHD.

It wasn’t long ago that many parents were told a dual diagnosis of ADHD and autism was not possible, that their child could have one disorder but not both. This belief changed with the revised Diagnostic and Statistical Manual of Mental Disorders, Fifth Edition (DSM-5), which states the disorders can and do co-occur in some children. Many families and doctors agreed that the DSM-5 was just catching up to their experiences with the updated information.

“There used to be an exclusion, that ADHD couldn’t be diagnosed at the same time or in the same child who has an autism spectrum disorder,” says Ericka L. Wodka, Ph.D., ABPP-CN, of Kennedy Krieger Institute in the Ask the Expert webcast The Relationship between ADHD and Autism Spectrum Disorder.  She explains this exclusion was because, “The vast majority of children with autism have a difficulty with attention that doesn’t necessarily warrant a separate diagnosis.”

Research shows a strong co-occurrence of ADHD and ASD

Research published in the medical journal Pediatrics shows that ADHD and autism may be co-occurring more often than previously thought. The study authors concluded that a “sizable minority” of children affected by ADHD also display symptoms or traits of autism spectrum disorder. This finding suggests autism spectrum traits are also connected to a greater impairment in interpersonal skills for children affected by ADHD and more difficulties in school.

A second study in the journal Autism found children affected by both ADHD and autism displayed lower cognitive function, more several social impairments, and greater delays in adaptive function than children who had a diagnosis of only autism spectrum disorder. A recently released study also shows that children diagnosed with both ADHD and ASD are at a greater risk than their peers of receiving a diagnosis of anxiety or mood disorder.

“I have long defined autism spectrum disorders as a mix of ADHD, anxiety, and a language-based learning disability, where language is taken too literally and body language is poorly understood,” Edward B. Aull, MD, writes in Autism, Asperger’s Syndrome, and ADHD for Attention magazine. “In someone with a mild condition, it often requires prolonged symptom review by the evaluator to ‘discover’ the correct diagnosis. It is not that the diagnosis of ADHD is incorrect, it’s incomplete.”

How can you best help your child if you suspect more than one condition affects him or her? Dr. Wodka suggests parents make sure their child has a thorough evaluation that considers the possibility of co-occurring conditions.

“It’s certainly possible for a child to have autism and ADHD, but these are two separate disorders,” she says. “If a child has a dual diagnosis there may be a separate understanding and treatment for the two disorders, especially when their disorders and symptoms overlap.”

“Recognition that a person doesn’t simply have ADHD, but also has Asperger’s syndrome or another autism spectrum disorder, may lead to better school and occupational results,” Dr. Aull says. “Although the diagnoses are not always easily differentiated, [ASD] is important to consider when someone thought to have ADHD is not doing well.”

Do you or your child have a dual diagnosis of ADHD and ASD? What has helped your family?

Exercise for ADHD: Ready To Start And Stick With It?