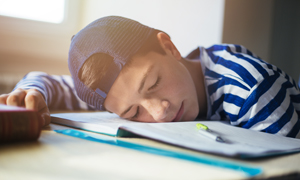 The first days of summer break might find your teenager sleeping in—maybe even until noon. Many teens greet the long break as a chance to catch up on their sleep, something they likely missed during the school year.

For teens who have ADHD, sleep is an important way of helping to manage ADHD symptoms, but it can also be hard to come by.

Teens generally have three challenges when it comes to getting enough sleep. Their bodies naturally shift to later times for waking and falling asleep as part of puberty. Many teens are also involved in social activities, sports, school clubs, scouting, and part-time jobs. Added to that are academic responsibilities and homework, along with early school start times. Altogether, these challenges encroach on their ability to get enough sleep.

When a teen also has ADHD, plus a sleep disorder or disordered sleeping patterns as a co-occurring condition, the situation becomes far more exhausting.

Emma Krabbe, a teen with ADHD, says sleep doesn’t come easily for her. That lack of rest becomes more noticeable throughout her day.

“It’s like your brain wants to shut down and it doesn’t want to take in any more information,” she describes.

The National Sleep Foundation and the American Academy of Sleep Medicine both state teens need between eight and ten hours of sleep, with some young people needing more time asleep to feel their best. Being sleepy impairs a person’s mood, the ability to make good decisions, reaction times, memory, and executive function. When a teen also has ADHD, that lack of sleep will make ADHD symptoms worse.

Additionally, many teens are involved in sports, work environments, and are driving. A lack of sleep and an increase in ADHD symptoms can lead to accidents and car crashes.

Why sleep is so important for teens

Many adults treat sleep as a treat and undervalue their own sleep needs. Teens, who feel pressures from academic, social, family, and employment responsibilities, emulate adults in this regard. Regardless of their responsibilities, teens require up to ten hours of sleep for their health and development.

Sleep also is a protective factor for decreasing the risk of developing depression and anxiety, or worsening those conditions if already present. It can also decrease some ADHD symptoms, such as impulsivity and hyperactivities, and help to improve a teen’s decision-making.

Parents and school districts have roles to play in helping teens get more sleep. Teens can also take steps to improve their sleep.

Parents can encourage teens to get more sleep by helping them develop and maintain a good bedtime routine. The body naturally shifts in sleep and wake times; this is not laziness or angst but a normal part of development.

Help your teen structure her day to better fit those natural patterns and still meet her obligations. This may include making adjustments in the evenings and mornings to allow her to get as much sleep as possible. Also, encourage your teen to be selective in afterschool activities to make sure there is enough time for homework and family time.

School districts can re-evaluate start times for middle and high school. Some schools that have moved their start time to later in the morning have seen student scores go up. Teachers at these schools reported less student drowsiness and more class participation. Students were less moody and had fewer behavioral issues. The improvement in academic performance made the shift to a later time a benefit for the schools, in addition to a benefit to teens’ education and health.

Teens can take control of their health by focusing on sleep. A bedtime routine with fixed lights out and morning alarm times can help train their bodies to ease into sleep. Bedrooms set up as comfortable places for sleep—blackout shades on windows, comfortable bedding, and limited electronics—help to associate the location with rest and sleep.

In addition to all these steps, teens with ADHD can improve their sleep by following their ADHD specialist’s recommendations for treatment and lifestyle supports. If a teen employs medication as part of treatment, the type of medication and the time for taking the medication can also help improve sleep.

The beginning of summer is a good time to allow teens to sleep in for a few days. Let your teen sleep until he feels rested and, generally, his body finds the right amount of sleep for him. After that, work together to establish a good bedtime routine and identify the things that make sleeping harder so they can be addressed.

If sleep continues to be a struggle, talk with your teen’s healthcare provider. Sometimes a sleep evaluation can identify disorder sleep patterns or diagnose a sleep disorder. Once identified, behavioral treatment and occasionally medication can help improve your teen’s sleep.

Not tired of reading about sleep yet?

Join the discussion: How have you seen sleep affect your teen’s ADHD symptoms?

Webinar: Do I Have to Talk to My Parents?