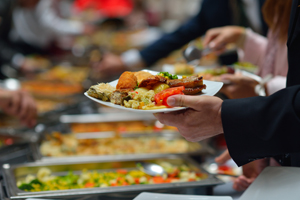 For some people, ADHD symptoms may play a role in their ability to plan and eat meals that leave them feeling full but not uncomfortable and can contribute to binge eating patterns.

Researchers and clinicians are examining the reasons why. They are looking for effective treatments to help people better cope with disrupted eating patterns, along with eating disorders.

Binge eating disorder is characterized by eating large amounts of food in short periods of time, often when a person is not hungry, according to the National Eating Disorders Association. People who binge eat feel as if they don’t have control over how much they eat and have feelings of guilt or self-loathing after a binge eating episode.

ADHD can contribute to eating disorders

Some people with ADHD also have binge eating disorder, thought to be related to a greater response in the brain’s reward system, according to a recent study. Study participants with either high or low levels of ADHD symptoms and a history of binge eating were shown pictures of food and non-food items. Researchers noted increased brain activity in the participants with high ADHD symptoms when they looked at pictures of food. The researchers concluded this heightened brain response may be why having ADHD includes an increased risk of also having a binge eating disorder.

The study also tested participants’ impulse control responses and found there were no differences in the results of those with low or high levels of ADHD symptoms. This led the researchers to conclude that impulsivity is not the main cause of binge eating in individuals with ADHD, as previously thought.

In a similar study, Allan Kaplan, MD, of the University of Toronto found that adults with binge eating disorder “are more sensitive to food-related rewards than most people” and found there is “ a genetic basis—certain genes make individuals more susceptible to reward and thus more likely to engage in binges.”

For the people with ADHD who participated in the first study, food or food images triggered the reward center of the brain at a higher level than in people in the same study who do not have ADHD. This reaction may be why many people who have ADHD who binge eat feel they cannot control their eating.

If you have ADHD and find yourself binge eating, it is important to be evaluated by a doctor who specializes in ADHD and eating disorders.

“Many individuals with ADHD are on a ‘see food’ diet. If they see it, they eat it,” says Roberto Olivardia, PhD, a clinical psychologist who specializes in the treatment of ADHD and eating disorders.

There are things you can do to practice healthy eating. Dr. Olivardia recommends becoming more aware of what and how much you eat and setting aside time for meal planning. Portioning out your food, such as putting chips in a bowl instead of eating out of the bag, can help you be aware of how much you eat. Reading the nutritional content on food packages can help with deciding on how much to enjoy at one time. Dr. Olivardia also suggests practicing mindfulness while eating and observing how full you feel.

Although some people may have a tougher time managing healthy eating, practicing these strategies, along with seeing a doctor who specializes in treating ADHD and eating disorders, can help you get a handle on binge eating.

Join the discussion: Have you found ADHD symptoms to get in the way of healthy eating?

Planning or Hoping for a Pregnancy? Talk About Medication with Your Doctor

Professional Webinar: Your Non-Adherent Patients in Primary Care. Could It Be ADHD?