Does age affect an ADHD evaluation? 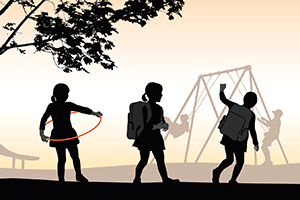 There can be almost a year between the ages of a group of children in a first grade classroom. Could that age gap play a role in the diagnosis of a child with ADHD?

Children as young as four years old may be evaluated for ADHD, with behavioral management and parent training as the recommended treatment. However, when it comes to children already in elementary school, there is evidence the youngest children in classrooms might be more likely to be diagnosed with ADHD than those who are six or more months older.

Canadian researchers followed a group of children in British Columbia to better understand their likelihood of receiving an ADHD diagnosis (Influence of relative age on diagnosis and treatment of attention-deficit/hyperactivity disorder in children). They found when children’s birthdays were at the end of the entrance year (November and December in Canada), they were more likely to be diagnosed with ADHD than their classmates whose birthday was at the beginning of the entry year (January or February in Canada). In the United States, kindergarten entrance cutoff dates vary between August and December.

The youngest in class, the most wiggly?

This information is then pooled by the evaluating professional, who makes a diagnosis based on the criteria laid out in the Diagnostic and Statistical Manual of Mental Disorders, Fifth Edition (DSM-5). You can learn more about the evaluation process at Comprehensive Assessment of Children.

Researchers and other professionals think it’s possible the youngest children are being compared to their older classmates. Behaviors that are age-appropriate, including increased physical activity and impulsivity, appear magnified when placed beside the more mature behavior of a slightly older student. Through this comparison, it seems that they are not meeting the benchmarks for behavior and learning expected in kindergarten, first, or second grade. The survey tools that capture the teacher’s or coach’s observations might yield an incorrect assessment because of the child’s age, rather than symptoms.

"The teacher will be comparing the child’s behavior relative to other children in the class," she says.  But a "six-year-old is just not the same as a seven-year-old.”

The recommended treatment for childhood ADHD is a combination of behavioral management and parent training, medication management, and education on how ADHD can affect the child and her family. Although the medications for ADHD, including stimulant medications, are considered safe when used as prescribed, they include the risk of side effects.

A child who is immature for her grade may be diagnosed with ADHD when the real cause of her behavior and inattention is related to her age, according to this study. While uncommon, a misdiagnosis can lead to unnecessary medication management for ADHD, which would include the risks of side effects without any benefits from the medication. Common side effects can include a decrease in appetite, difficulty sleeping, headache, or nausea. Though rare, more serious side effects have been noted. You can learn more about these concerns in Managing Medication.

"The younger children in a grade were significantly more likely to be diagnosed, labeled, and treated with medication for what in some of them must simply be immaturity," says Dr. E. Jane Garland, a child and adolescent psychiatrist at the University of British Columbia in Vancouver, who was one of the researchers in the Canadian study. She discussed her team’s findings with CNN for Health.com.

"It really becomes the responsibility of parents, physicians, and teachers to pay attention to the relative-age effect and not intervene with treatment for children when it’s no fault of their own what time of year they were born," Dr. Garland says.

Seeking an evaluation for childhood ADHD

What should you do if you suspect your child is affected by ADHD? The first step is to discuss it with your child’s pediatrician and to ask for a referral to a specialist in childhood ADHD.

When your child is evaluated, be sure to ask:

Learn more about childhood ADHD at Understanding ADHD For Parents and Caregivers.

Have you seen a relationship between your child’s age and ADHD symptoms?

The youngest children in a classroom could be more likely to be diagnosed with ADHD than their slightly older peers. Why is this? Researchers are exploring possible reasons. Read on for more information and suggestions on helping your child.

Get Ready for Summer: Tips for Parents

Does age affect an ADHD evaluation?

Take a Summer Break? Medication Holidays for Your Child