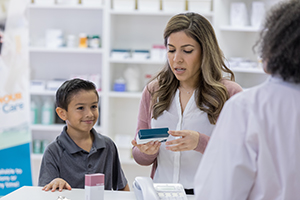 Early intervention for ADHD helps children in school and daily life. A new study shows that including medication in the treatment plan has specific benefits, including lower risk of developing common co-occurring conditions.

Medications for ADHD can help to improve a child’s ability to focus on educational materials and stay on task, as well as to follow directions and better participate in friendships and social activities. Researchers say addressing ADHD symptoms with medication not only improves academics and social behavior but also helps to prevent other problems that are related to co-occurring conditions.

Medication can have a protective effect

About two-thirds of children and adults diagnosed with ADHD also have a co-occurring condition. They can create difficulties for the children and their families, in addition to much unhappiness for the children. Dr. Biederman’s research team found that including stimulant medication in treatment lowered the risks of developing:

This is in addition to improving school performance and, for teens, reducing the likelihood of being involved in car accident.

Alan Geller, DO, a psychiatrist who works with children and teens at Gracie Square Hospital in New York City, says that by treating ADHD symptoms, families are actively helping to prevent problems that can trigger secondary conditions or intensify existing comorbidities.

“A hyperactive child who interrupts and disrupts class is annoying,” Dr. Geller says. “They end up getting marginalized, which can lead to substance abuse or conduct disorders, or depression and anxiety if they’re constantly frustrated. They end up feeling alone and like no one can help. It’s a major problem without treatment.”

Understanding the benefits of treatment

Treating ADHD has many benefits, which can include helping a person to live longer.  Researcher Russell A. Barkley, PhD, recently released his findings that treating ADHD can help a person not only avoid developing co-occurring conditions but better manage chronic health conditions. Managing one’s health better can add nine to 13 additional years to one’s life.

Proper treatment of ADHD symptoms can help a child succeed academically, improve friendships and social relations, and improve family life. The protective benefits including protecting and developing a healthy self-image and confidence, along with avoiding substance use, disruptive behaviors, and early sexual activity. Teens who employ medication as part of treatment have better driving records and fewer car accidents.

Join the discussion: What has been your family’s experience with medication management?

Parent to Parent Webinar: When You and Your Child Have ADHD