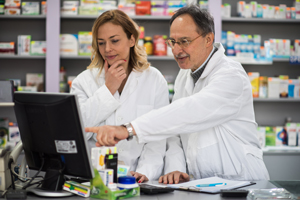 Many people tell us they still go to the doctor’s office to pick up a handwritten prescription for ADHD medication when it’s time to refill. Have you asked whether it could be sent electronically to the pharmacy?

Often people have been told by prescribers that, as a Schedule II medication, their stimulant medication couldn’t be electronically prescribed. This answer is often frustrating and not entirely correct.

“It used to be that the doctor had to handwrite the script, but the 2010 DEA rule changed that,” says Eli Tomar JD, MPH, of CHADD’s public policy committee. “Electronic prescriptions now meet all the requirements for security for scheduled medications.”

Electronic prescribing, referred to as eprescribing, is when the doctor writes a prescription and sends it directly to the pharmacy through a secured system. This is different from the more familiar practices of calling a pharmacy or faxing a copy of a handwritten prescription. Verification codes are used and the information is encrypted to prevent tampering and to provide patient privacy. The doctor and the pharmacist have immediate access to the appropriate medical and prescription records to prevent interactions and provide the best possible healthcare.

“After years of trying to get eprescribing up and running on both the pharmacy and provider side of the equation, use of eprescribing technology has finally become the norm, rather than the exception,” says Dewey Howell, MD. He is vice president of Clinical Applications for First Databank, a provider of electronic prescribing systems. “In fact, 90 percent of pharmacies in the United States now accept electronic prescriptions and 70 percent of physicians use eprescribing, according to the Office of the National Coordinator of Health IT. With this level of adoption, the industry is well on its way toward enjoying the patient safety, efficiency, and cost-saving benefits associated with eprescribing. As a doctor who has been championing the use of eprescribing and its ability to improve care for quite some time, the progress is something that I am really happy to see.”

Eprescribing has the combined benefits of patient safety and cost reduction, according to research. A study done on these benefits showed reductions in prescribing errors, increased efficiency, and greater patient compliance.

“Medication errors have been reduced to as little as a seventh of their previous level, and cost savings due to improved patient outcomes and decreased patient visits are estimated to be between $140 billion and $240 billion over 10 years for practices that implement eprescribing,” the researchers write. “However, there have been significant barriers to implementation including cost, lack of provider support, patient privacy, system errors, and legal issues.”

Just because the DEA now allows eprescribing it does not mean all states have made it easy, though they all do currently allow Schedule II medications to be eprescribed, he says. Medical offices and healthcare companies can also have individual practices regarding medications.

“State health coverage programs and individual insurers may impose additional barriers and restrictions on prescribing and acquisition of these products,” Mr. Tomar says. “It’s very common for practitioners to not be fully aware of the applicable laws and they may be working off old information. Prescribers may inaccurately refer to quantity limits and refills as prohibitions on eprescribing, when they are not.”

“It still requires a lot more physician visits than an unscheduled medication,” he says. “It’s not an outright prohibition, but there can be more hurdles depending on the situation.”

What it can mean for you

Are you interested in the convenience and improved safety electronic prescribing could provide for you or your family? The next time you meet with your prescriber, discuss the possibility of eprescribing and ask if the medical office has the capability. Discuss also how often the state requires doctors and patients to meet when stimulant medications are prescribed.

It may be that your prescriber’s office is not yet prepared for eprescribing. Requests from multiple patients can encourage medical practices to explore the needed software.

If your prescriber’s office is capable of eprescribing, it could mean reducing your office visits to the minimum required by law or by your insurer. It could also mean that even if you meet with your prescriber, you don’t have to receive a paper prescription that needs to be hand carried to the pharmacy. You wouldn’t have to worry about misplacing your script having it stolen. It could also reduce your wait time in the pharmacy—your prescription could be ready when you arrive.

The software systems can flag any possible medication interactions or other concerns while you’re in the prescriber’s office, allowing for discussion of alternative treatment options right away. Then you wouldn’t need to return for a different prescription should the pharmacist recognize a potential interaction when filling the prescription.

Join the discussion: Have you discussed eprescribing with your healthcare practitioner?

Webinar: What You Can Expect In The First Six Months Of Treatment