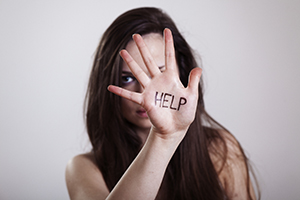 This past May, the hashtag #MaybeHeDoesntHitYou was shared widely on Twitter, stressing how damaging emotional abuse by an intimate partner can be. Social media posts primarily from women displayed the abuse they received from the people who claimed to love them.

#MaybeHeDoesntHitYou but he belittles your mental illness and makes you feel terrible about things you cannot control.

#MaybeHeDoesntHitYou but steals and hides your medication.

Did you wince reading those tweets? For many abused partners affected by ADHD, the actions in these tweets are common occurrences. A lack of understanding for what domestic abuse is―not just physical abuse but also emotional, financial, social, and medical abuse―makes it hard for many people to recognize that abuse is much more than when one partner physically strikes the other. Many spouses and partners affected by ADHD must daily navigate the symptoms of the disorder and abuse from an intimate partner. She has developed a cognitive-behavioral intervention targeting problems of time-management and organization in adults with ADHD titled, Cognitive-Behavioral Treatment of Adult ADHD: Targeting Executive Dysfunction.

“Domestic violence is a complex and confusing situation for the survivor,” says Amber Guthrie, MA, project manager for the coalition that provides training and technical assistance at the Maryland Network Against Domestic Violence. “What we are seeing throughout the field (of domestic violence support) is complex and emotional violence.”

Domestic violence, she says, is not just when one spouse or partner hits or physically harms the other spouse or partner. It includes verbal and emotional abuse; psychological abuse; medical abuse and medical interference; financial abuse; control by restricting access to money; or social abuse by taking away the driver’s license, car, house keys or access friends or family members. According to the Maryland Network Against Domestic Violence, one in four women and one in seven men will experience physical violence from a domestic or intimate partner.

“It comes down to power and control,” Ms. Guthrie says. “It’s the ability to make someone feel ‘less than.’”

The feeling of being “less than” is familiar for many women affected by ADHD, says Joan Teach, PhD, an educational consultant in Atlanta, Georgia, president of the Learning Disabilities Association of Georgia, and a former member of the CHADD Board of Directors. Dr. Teach has supported women coping with domestic violence through her work coordinating support groups and counseling women affected by ADHD.

“They do not realize that they have the right not to be abused,” Dr. Teach says. “They seem to think that because they’ve always been a little ‘less than’ their whole lives, they deserve to be treated this way. They don’t realize that they don’t have to put up with it.”

Dr. Teach says many women affected by ADHD have absorbed the negative comments due to ADHD over their lifetime, such as “If you just tried harder” or “You’re careless.” Girls and women are frequently diagnosed later than boys and men. This means they have much longer in their lives when they don’t know that ADHD is causing academic and social failures, time in which many develop the conclusion they are naturally failures and less capable than other people around them.

An abuser plays on those already existing feelings of inadequacy and reinforces the idea that the woman doesn’t deserve good things happening in her life, Dr. Teach says.

“That foundation makes them look at themselves and say, ‘Oh, I’m not worthy of a positive relationship,’” says Dr. Teach. “What happens is they feel that they are not allowed to be successful. Or they have so many things wrong with them that they deserve these (abusive) relationships. ADHD doesn’t cause domestic abuse, but I think the vulnerability is higher, therefore it’s more likely to occur.”

Ms. Guthrie says one of the things an abuser will do is create chaos in a victim’s life. Chaos is always a possibility for women coping with the symptoms of ADHD and the demands of a job or career, children, and family life. Many women attempt to create systems that could resolve that chaos, only to see their abuser intentionally disrupt those systems.

“Even if it’s not using demeaning words, it’s using the chaos around them to create more chaos,” Ms. Guthrie says. “It’s using her environment to further his control.”

Another form of abuse a partner affected by ADHD may face is medical abuse, when the abuser works to separate the victim from her doctor, psychiatrist, or other mental health professionals in whom she might confide. The abuser might find ways to control her access to medication or ADHD treatment by denying her access to money or health insurance or preventing her from having transportation to a doctor’s office or pharmacy.

At home, a partner who is abused will find herself blamed for every difficulty the couple or family faces. A woman affected by ADHD often feels she is at fault for the problems around her, either because of her ADHD symptoms or because she has been conditioned that she hasn’t tried hard enough to create a “perfect” home life.

“If he’s just verbally abusive, she doesn’t understand it as abuse,” Dr. Teach says she has seen this in the women she’s worked with. “She doesn’t see herself as an abused woman until it becomes physical abuse. She thinks she just has to try harder. Usually disorganization is part of it. So the house is in disarray and that’s another big issue. He doesn’t think he needs to contribute time for the household and the children. She’s overwhelmed and can’t keep up with his demands.”

There is help available for women and men in abusive relationships. Ms. Guthrie says an abused partner will often reach out to family members or friends before a medical professional or calling an abuse survivors hotline. Educating the public helps to provide those friends and family members with accurate information should someone experiencing abuse confide in them. Dr. Teach encourages them to listen and support the survivor.

Ms. Guthrie adds that domestic violence hotlines are free and confidential. What is shared with the call specialists who answers will never be shared with an abuser or any others (with the exception of necessary information on child or elder abuse).

“There’s no judgment,” she says. “We really want to make sure we’re connecting people to the best resources.”

Dr. Teach says she has known women who have found help when they confided to members of her women’s ADHD support group. These groups provide an opportunity to reach out for help, both Dr. Teach and Ms. Guthrie say.

“The biggest value CHADD provides for these women is a free support group,” Dr. Teach says. “A lot of women come to the parent support groups, because dad will say, ‘Yes, you can go find out how to take care of the kids.’ What that does is open them to talk about their children, and it becomes about them.”

And when it does become about what she is experiencing, Ms. Guthrie says this is a chance for others to help.

“Just say, ‘I believe you. You don’t deserve this. How can I help?’” she says. “For survivors, it’s about recognizing that they’re not alone.”

When a person is ready to leave an abusive relationship, there is support available. A domestic abuse hotline and organization can help her to make a plan and collect needed paperwork or money. There is assistance to re-establish her life, including counseling and housing support for victims and their children.

If you are experiencing abuse, know that it is not your fault. It is not because you have ADHD. As Dr. Teach says, you don’t deserve the abuse.

Tell us what you think. Comment on this article.

Signs of Domestic Abuse and Violence

The Maryland Network Against Domestic Violence includes these behaviors among the forms of abuse a person could experience:

Sexual Abuse: forcing sex on an unwilling partner, demanding sexual acts that the victim does not want to perform, degrading treatment

Coercion: making the victim feel guilty, sulking, manipulating children and other family members, always insisting on being right, making up impossible rules and punishing the victim for breaking them

Harassment: following or stalking, embarrassing the victim in public, constantly checking up on the victim, refusing to leave when asked

Threats and Intimidation: threatening to harm the victim, the children, family members and pets; using physical size to intimidate; shouting; keeping weapons and threatening to use them

Emotional Withholding: not expressing feelings; not giving compliments; not paying attention;, not respecting the victim’s feelings, rights, and opinions; not taking the victim’s concerns seriously

— from What is Domestic Violence?

Get Tips for Helping Your Students Affected by ADHD