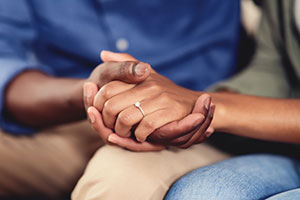 Where is romance without the ability to forgive?

When ADHD is part of your life, there will be mistakes, words taken out of context, and errands or important days forgotten. This is true whether you are the one with ADHD, or your spouse or partner has it. Some little things will quickly pass, but others could cause deep and unintended hurts.

ADHD affects working memory. This is where we keep dates (like your anniversary or Valentine’s Day) and to-do lists in our minds. When impaired by ADHD, we forget these things. Sometimes, in forgetting dates or activities or to bring home the bread and milk, we hurt our partners’ feelings. They might feel we don’t care enough about them to remember dates and items that are important to them.

When we are the ones forgotten time and again, it can feel as if we are lower down on our loved one’s list than we actually are. It can seem as if our energy in caring for the other person is not returned and we are not valued.

How do we address these lapses and help one another in our relationships?

When we forgive, we examine our feelings and the actions of the other person. We acknowledge the hurt done without minimizing it. Doing so releases our tether to the action or inaction, so that it cannot cause more hurt.

“When you forgive someone, you make the choice to give up your desire for revenge and feelings of resentment,” says Susan Krauss Whitbourne, PhD. “You also stop judging the person who caused you the hurt. In forgiveness, you don’t forget that the offense occurred nor do you excuse it. You substitute your negative with positive feelings, thoughts, and behavior.”

In a relationship affected by ADHD, forgiveness includes knowing how ADHD symptoms affect the partner who has the diagnosis. It is separating the symptom from the person. The slight may not have been caused by the partner’s indifference but by the symptom interfering with the other person’s desire to be responsive to you.

It also means addressing the symptom and working together on treatment or management. In offering forgiveness, we create an opportunity to work together on how ADHD affects a marriage or partnership.

“Forgiveness is such a key component to a healthy relationship because, let’s face it, people are not perfect,” says Lisa Firestone, PhD. “However, if we want to enjoy a lasting relationship with someone we value and choose to spend our lives with, we may want to grow our ability to forgive.”

Dr. Firestone says a big part of forgiveness within a relationship is the willingness to “drop the case” and let the hurt go without returning to it later. While forgiveness is not forgetting in every case, many times that is what is needed when dealing with injuries related to ADHD symptoms.

“Instead, couples put their effort into maintaining a positive relationship, in which they are less hostile or punishing,” she says.

Forgiveness is a personal experience. It includes accepting that a hurt or a wrong has happened. It allows you to experience the emotion of having been hurt and understanding how that has affected you. Then it is making a choice to no longer allow that hurt or wrong to affect you or the relationship by setting it aside. It is a conscious action.

The steps to forgive may vary by person or couple, but most could look like this:

—Adapted from Forgiveness and Letting Go in Your Marriage

Just as offering forgiveness is an important part of a relationship, so is the willingness to apologize when symptoms lead to mistakes.

“I’ve learned that an important reason for saying I’m sorry is so that I can forgive myself and move forward,” says former CHADD president Marie Paxson. “Without making an apology, I will feel awful about the incident. So as uncomfortable or awkward fessing up may be, it beats the heck out of carrying guilt and shame.”

Knowing when you’ve hurt someone is an important part of making a sincere apology, says Ms. Paxson. Being willing to correct your actions in the future, including building additional support systems to address symptoms such as forgetfulness, is part of a healthy apology.

“Whenever you do make an apology, remember that you are apologizing for your behavior, not your existence,” she says.

Here are her suggestions on what you need to say when making a heartfelt apology:

—Adapted from How to Make a Good Apology

Apology accepted, forgiveness given. Now what?

“Couples who practice forgiveness can rid themselves of the toxic hurt and shame that holds them back from feeling connected to each other,” says Terry Gaspard, MSW, LICSW. “Experts believe that forgiveness can allow you to break the cycle of pain and move on to a healthier life.”

Forgiveness takes practice, and sometimes couples need to work with a therapist or counselor to build their skills. Learning to forgive is an ongoing action, requiring us to evaluate our abilities and the other person’s intentions as problems arise. Recognizing what lies behind a slight—ADHD symptoms or unkindness—is an important aspect in our ability to forgive within a relationship.

Join the discussion: How do you and your partner handle the inevitable hurts caused by ADHD symptoms?