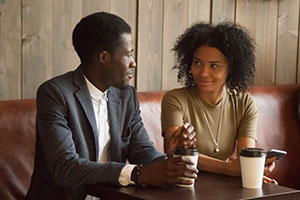 Falling in love might be easy, but dating is hard!

Figuring out how and where to meet people and then planning an actual date with someone can be challenging. Wondering when to share your ADHD diagnosis while trying to get to know a near stranger can feel overwhelming.

Knowing when and how to share your diagnosis, which can be deeply personal information, can mean the difference between a string of bad first dates and a lasting relationship.

There’s no hard-and-fast rule about when to share that you have ADHD, says Ari Tuckman, PsyD, MBA. Dr. Tuckman is a psychologist and the author of the forthcoming ADHD After Dark: Better Sex Life, Better Relationship.

“If this is someone you’re just having casual fun with, you probably have less of a moral obligation to disclose anything,” says Dr. Tuckman. “On the other hand, if your new or potential partner would be impacted by this information if the relationship got serious, they will probably have more of a desire to know about it since they have something at stake.”

Get to know the other person first—and give your friend a chance to get to know you, recommends Gina Pera, author of Is It You, Me, or Adult ADD? Your new friend may have some ideas about ADHD, either romanticizing it, believing it’ll make you exceptionally creative, intelligent, and fun, or seeing you as a project. These ideas could affect a new relationship, she says.

Ms. Pera remembers a friend with ADHD whose now-wife preferred he not take his medication when they were getting to know each other. She thought it made him less entertaining to be around. That is, until he forgot important appointments and drove off with her purse on the roof one time too many.

“Some people don’t realize how impairing ADHD is until they get into close relationship,” Ms. Pera says. “It’s not that the relationship has caused the ADHD to get worse—although stress can do that—it’s that the partner is holding up a mirror.”

Pay attention to what you see in this mirror, even if it makes you uncomfortable at times.

“There’s nothing like an intimate relationship to reveal parts of yourself that you didn’t know so well before,” Dr. Tuckman says. “Sometimes these are positive qualities, but sometimes not so much.”

Ready to kiss and tell

When is the right time? That is up to you. Some may want to share this information on the first or second date; other may wait a few months to see how the relationship is developing before telling their friend. However, as you grow closer together, it usually becomes necessary as the romance grows.

Sometimes a new friend will hear “ADHD” and stop calling. Others may have to adjust their expectations, like the woman who asked her new boyfriend to stop taking his medications while they were dating. She later told Ms. Pera that she felt like the victim of a bait and switch, disappointed that ADHD didn’t translate to nonstop fun. She felt differently when she did learn more about ADHD.

If the information is accepted, you may be ready to share your diagnosis. Be honest about its effects on you and how it may affect your relationship.

“Most people tend to be more forgiving if they feel the other person is putting in the effort,” says Dr. Tuckman. “Ultimately, remember everyone has some sort of issue and baggage, so don’t get down on yourself about ADHD—and then, because of that, perhaps reconsider staying with someone who causes you to feel bad.”

What do you say?

“I had a client who had been dating a woman for a few months but hadn’t told her about his ADHD,” Dr. Tuckman remembers. “Even though he hadn’t said anything about it, his troubles with time management, paying attention, and interrupting her were frequent sources of frustration for her. We discussed whether he should tell her. Ultimately he decided that he needed to, because she was coming to her own conclusions about him on account of his actions. This helped her better understand why he did certain things and gave them less to argue about.”

Explaining your symptoms and how they affect you, without yet saying ADHD, is a good way to start the conversation, recommend both Dr. Tuckman and Ms. Pera.

An example of what you could say, according to Ms. Pera, is, “I have trouble arriving places on time. I’m working on it but I’m not perfect, so I just want you to know that if I’m ever late to meet you, it’s not because I don’t care.”

If you chose to be more direct, you could ask an open-ended question, such as, “What do you know about ADHD?” Then listen to what your friend tells you in the reply. You’ll have a better sense of what the person knows about ADHD, as well as what he or she thinks or believes about how it affects people. This will let you know where to begin and how well your disclosure might be received.

Ms. Pera also suggests that you share a little bit of personal history showing how you have addressed some of those challenges.

Perhaps this may become your lifelong relationship. Be aware that ADHD symptoms can intrude upon building a healthy relationship and maintaining the romance.

Once you’ve settled into your relationship, you and your partner will have the opportunity to address those symptoms together, as long as you keep the lines of communication open. Address challenges as they arise, and understand that many couples need to work with a therapist to keep communication open and healthy while coping with ADHD as a couple.

“Someone who spent most of their life with untreated ADHD may unconsciously expect that it’s an inevitability that a new romantic partner will often be angry or disappointed with them,” Dr. Tuckman says. “Whether you were the one with or without ADHD, one rule of relationships remains true: Those who deal with their issues are in a better position to create a successful relationship.”

Join the discussion: Have you shared your ADHD diagnosis with someone you recently started dating? Were you glad you shared the information?